Xi on the Indian border

This Xinhua report says that Bayi, the capital town of Nyingtri (Chinese: Nyingchi) is a village!It used to be a Tibetan village!
It is now a modern Chinese town on the banks of River Nyang (a tributary of the Brahmaputra) at an altitude of 2994 metres.
Bayi is an important timber and wool producing town. According to Wikipedia: "The new town completely absorbed the ancient village of Drakchi, which used to stand on this site. The population is now mostly Han Chinese. ...There are 9 villages under the jurisdiction of the township, with a total population of 21,400, from the Han, Hui, Mongolian, Xibe, Manchu ethnicities." 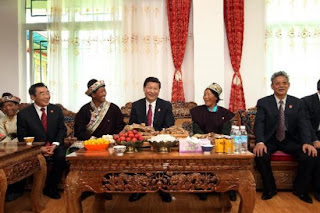 Very few Tibetans are left, Vice-President Xi however found some to taste chura, hard Tibetan cheese.
As this map posted below shows Nyingtri Airport (and Bayi) are extremely close to the Indian border (the red line is the McMahon Line).
It is the first time that such a senior leader ventured in this area which is also the base for a purported mega dam on the Brahmaputra (near the Great Bend of the river in the same county).
Once again Xi spoke of stability: "People of all ethnicities in Tibet need to understand that stability leads to prosperity and separatist activities lead to disasters."
This has been the leitmotiv of the visit, perhaps because Tibet has never been so unstable since 60 years. 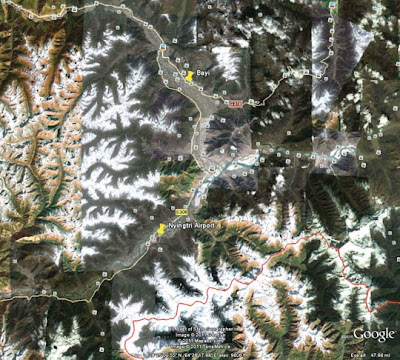 When Xi spoke to the PLA and PAPF (People's Armed Police Force) posted in Nyingtri, he did not mention China's southern neighbour, India.
He just said that he appreciated "their contributions to the social progress, ethnic unity and the improvement of local people's lives in the area".
Earlier, he had described Tibet “as an important national security screen for the country”.
A rather mild term for a disputed border.
But the objective of his visit was not to create more problems with India, but to see how to 'stabilize' the restive region.
Zhang Qingli, the Party Secretary of the TAR accompanied Xi, in his southern trip.

NYINGCHI, Tibet, July 21 (Xinhua) -- Vice President Xi Jinping Thursday urged Tibetans to unswervingly follow the Communist Party of China (CPC) to build a brighter future.
Xi made the remarks as he visited the village of Bagyi in Nyingchi Prefecture of Tibet Autonomous Region, one leg of his tour in the plateau region for celebrations marking the 60th anniversary of its peaceful liberation.
Addressing the villagers, Xi said it was the socialist system, the correct leadership of the CPC, and the implementation of various preferential policies that led Tibetan people to their good life today.
"People of all ethnicities in Tibet need to understand that stability leads to prosperity and separatist activities lead to disasters," he said.
Xi visited Nyingchi 13 years ago when he was a senior official of southeastern Fujian Province.
On Thursday, Xi visited homes of rural families of Nyingchi and was pleased to learn that many villagers had become rich.
He asked the local officials to continue their efforts in advancing the area's development and maintaining the long-term social stability.
He also called for more efforts to promote the tourism industry and protect the environment in the area.
Xi also extended his greetings to the officers of the People's Liberation Army (PLA), the People's Armed Police Force and the police forces in Nyingchi, appreciating their contributions to the social progress, ethnic unity and the improvement of local people's lives in the area.
Posted by Claude Arpi at 7:07 AM