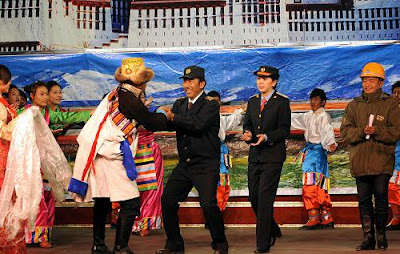 The Tibetans are happy and liberated.
It is basically what Beijing affirms in a  White Paper on 'The Liberation of Tibet' recently released by the State Council's Information Office.
A communique says: "The 60 years following Tibet's peaceful liberation have proved that Tibet, as an inseparable part of China, shares its destiny with the motherland, and its development is also impossible without that of China".
One discovers astonishing information: "After the founding of the People's Republic of China in 1949, Tibet was peacefully liberated. Under the leadership of and with special care from the Central People's Government, and through democratic reform, the founding of the autonomous region, socialist construction and the reform and opening-up, Tibet abolished serfdom and theocracy, become a modern, democratic socialist society, achieved rapid and comprehensive economic and social development, and embarked on the road to modernity." 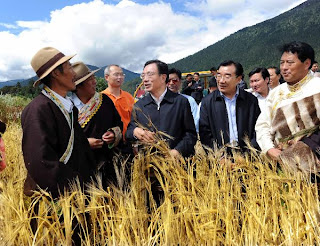 According to Beijing "Tibet's 60 years of development would have been impossible without the care of the Central Authorities".
Without commenting on the 'democratic socialist society' (it used to be called the 'dictatorship of the proletariat'), facts on the ground do not tally with the words of the White Paper.
Why should Tibet be closed to foreigners for any special 'celebration' if the life is so rosy and if the Tibetans are so grateful to the 'Motherland'?
As the White Paper was released, the Tibetan Centre for Human Rights and Democracy (TCHRD) announced that the Kardze County People’s Court sentenced 13 Tibetans out of many others arrested.
TCHRD says: "The Chinese Authorities have begun to restrict and suppress the monasteries and the common people in Kardze County. There has been an increase in the arrest on doubt cases. For example, on July 5th 2011, in Kardze Dhargyal Monastery, the local police came and interrogated the monks and especially the monks who returned from India. Monk Lobsang Choejor (35) and monk Jampa Wangchuk (46) were interrogated and then taken into Kardze Detention Centre and till date they are in detention center."
The TCHRD further stated that on July 5th, 2011 the Public security Bureau arrested Pema Rinchen, a famous writer from his house in Drango County of Kardze Prefecture,: "On July 6th, 2011, the second day of his arrest he had to be taken to the Drango County Hospital for emergency treatment, because he was reportedly savagely beaten by the police after his arrest. His injuries are believed to be caused by severe beatings by the police. On hearing the news, his family members rushed to hospital. However, several policemen were standing guard outside his hospital room and refused to allow his family to see him".
Examples in Kirti monastery and elsewhere could be multiplied.
What is flabbergasting is that Beijing continues to publish photos of 'happy Tibetans' enjoying life under their benevolent and compassionate 'Motherland'. 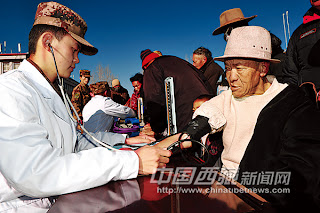