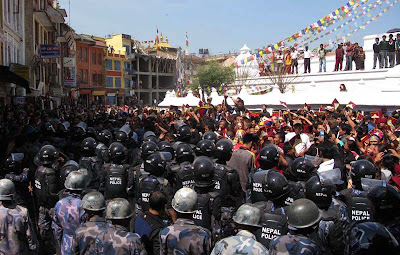 This article of Asia News affirms that "Beijing is afraid of more anti-China protests and has increased its control over its borders with Nepal ahead of the visit to Tibet, of Xi Jinping".
Why should the Nepal government be afraid of the Chinese Vice-President (and future President) visit to Tibet?
Let us not forget that Xi Zhongxun, Xi Jinping's father who was a senior assistant to Marshall Peng Dehuai, played a relatively positive role in Tibet in the 1950's, till he was purged in September 1962 (probably because he wrote that the Panchen Lama was right in his assessment of the situation in Tibet during the Great Leap Forward).
In 1947, Xi Zhongxun was one of Deputy Political Commissars of the North West Field Army commanded by Peng Dehuai who simultaneously wore the hat its Political Commissar. Later Xi became Political Commissar for the First Field Army; it was this Army which first entered North-western Tibet in 1949.
While Xi Zhongxun came from a  military background, he was very close to the late Panchen Lama (and later to the Dalai Lama). When the former passed away in mysterious circumstances in 1989 in Shigatse, Xi wrote his obituary in The People's Daily (in Chinese).
Strangely, very little has been written about Xi and his connection with Tibet.
For example, General Fan Min, one of Xi's collaborators who published (posthumous) his memoirs (The Internal Struggle in Tibet, Contradictions between the Dalai Lama and the Panchen Lama, Differences at the Highest Levels of the Chinese Communist Party), hardly mentions Xi Zhongxun.
A friend explained: "In many ways, they were peas [Fan and Xi] from the same pod with Xi, of course, being much higher ranking. I therefore went to the section of Fan’s book where he discusses the [Panchen Lama’s] 70,000 character petition and was surprised that Xi’s name is not mentioned at all. Very strange indeed! I then thumbed my way through all 600 pages and came up with only a few references to Xi from the early days when he went to Xining, Qinghai to prepare the very young Panchen Lama for his trip to down to Tashilunpo under the protection of troops from the 1st Army. I cannot explain why Xi gets such short shrift from one of own. Fan treats Peng Dehuai as if he were a god, but next to nothing about Xi."
It is probably true that Xi Jinping does want to highlight his 'Tibet' connection, a year before his elevation at the top of the Party and links to his past seem to have been removed.
In any case, the Vice-President's visit to Tibet should not been seen as negative and there is no reason for the 'West' to support large scales protests; on the contrary, it is good if Xi Jinping can see by himself the tense situation in the Himalayan region.
Nepal's reaction is all the more surprising, but the present restrictions (dictated by Beijing) are perhaps not linked to Xi Jinping's visit, but to the 'celebrations' of the 90th anniversary of the Communist Party.

Nepal: China: Xi Jinping visits Tibet. Beijing fears protests and closes the borders with Nepal
China is afraid of fresh protests by Tibetan activists supported by the West.
Total closure of the Tatopani passage the only access to Tibet from Nepal. Entry to foreign tourists denied until July 25.
July 14, 2011
Asia News
Kathmandu - Beijing is afraid of more anti-China protests and has increased its control over its borders with Nepal ahead of the visit to Tibet, of Xi Jinping, Chinese vice president, in the coming days. Tatopani pass, the main route connecting Nepal and Tibet, and other minor crossings will remain closed until July 25th. The controls on the borders between the two countries started on 25 June during the celebrations for the 90th anniversary of the Chinese Communist Party. According to AsiaNews sources in China, the vice president will visit Tibet mainly to control the activities of separatist movements and verify the West’s support for those groups.
On July 12, the Beijing government announced that the total closure of borders concerns mainly foreigners, especially Americans, Indians and Europeans, who could sympathize with the Tibetan activists. According to local media Beijing’s decision has resulted in a sharp drop in tourist reservations. During this season tourists frequently travel to Tibet through Nepal. Every day over 400 visitors pass through Tatopani.
Bijay Poudel, head of immigration at the pass, underlines the severity of the crackdown of the Beijing government, which in recent years had always opted to control the borders, but never for a total closure. "It is the first time I’ve witness such close control by Chinese authorities - says Poudel - I can not understand what Beijing’s real purpose is." The official said that security measures are much more restrictive than controls made in March, the anniversary of the Tibetan uprising against China.
Nepal has a 1,414 km long common border with Tibet. From 1990 to 2006, the parliamentary monarchy, on the advice of India, has allowed the free movement of Tibetan exiles in the country. The Dalai Lama and members of the Tibetan government in exile in Dharamsala (India) visited the country several times. To date, over 20 thousand Tibetan refugees are registered with the UN offices.
After the abolition of the monarchy in 2006 and rise to power of communist and Maoist formations Nepal has changed course, abandoning its historic ally India and establishing closer relations with China. In exchange for economic aid, Beijing has called for the closure of borders with Tibet and the repression of any anti-China protest.
Source: Asia News
Posted by Claude Arpi at 7:32 AM