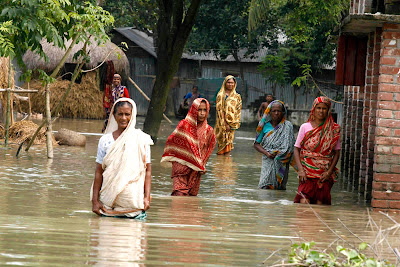 This is good news. If India and Bangladesh decide to collaborate and jointly make efforts to share the Brahmaputra's waters.
It can only pressurize China to join and sign a Treaty which will assure the co-riparian States of a fair deal.

It goes in the sense of my recent posting: a Joint Treaty on Water Sharing with China.
It is a great pity that the Prime Minister has decided to kick the Environment Minister up; he could understand these important issues.
As often, wrong decisions at a crucial time.
Once again, powerful lobbies must have prevailed.

B'desh suggests joint approach on Brahmaputra water-sharing
PTI |
July 07,2011
From Pallab Bhattacharya Dhaka, July 7 (PTI) Bangladesh today suggested a joint approach by co-riparian countries to address the issue of sharing of the Brahmaputra waters in the wake of reports that China was planning to build a dam on the river in Tibet. "We have been talking about joint sharing of water resources among countries of the region. I think there is now an understanding among all neighbours of the region to work together in this regard," i told a group of Indian journalists here.Answering a question on the Chinese plan to build a dam on Brahmaputra river in Tibet, she said "co-riparian countries will have to act together on the issue but it is going to take a long time." Moni expressed the hope that none of the neighbours would do anything which would have a negative impact on each other. Her remarks assume significance in the backdrop of reports about the Chinese move to construct a dam on the river Yarlung Tsangpo, as Brahmaputra is known in Tibet, and deep concerns over its impact on water availability to northeastern India and further downstream Bangladesh. External Affairs Minister S M Krishna, who is on a three-day visit here, had said earlier that India was monitoring China's activities on the river, but dismissed the reports about a firm plan to construct the dam. Reports also said China is planning to build a run-of-the river project on Yarlung Tsangpo.
Posted by Claude Arpi at 5:19 PM