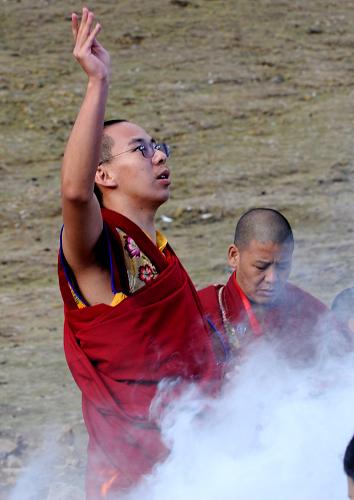 During Vice-President Xi Jinping's recent visit to Tibet, I mentioned the absence of the Panchen Lama in the entourage of the future Chinese President.
Reading this article of Radio Free Asia, one understands better the embarrassment that the young Lama, who has never been accepted by the majority of Tibetans, could have been for Xi Jinping.
One year before his 'elevation' to the supreme post of the People's Republic of China, Xi decided not to take the risk of an incident.
Even during the main function in front of the Potala, while Xi Jinping was delivering his speech, beautiful dressed Tibetans seemed very bored, some of them leaving their seats.

China's Panchen Lama Visit Put Off
Radio Free Asia
2011-07-29
Beijing fails again to force acceptance of their choice of a senior Tibetan Buddhist figure.
The Chinese government attempted to parade its handpicked Panchen Lama this month in a key Tibetan-majority area but shelved the controversial move following widespread resentment from the people, sources said this week.
Extraordinary security measures were taken in recent weeks for the 21-year-old Gyaincain (in Tibetan, Gyaltsen) Norbu to visit the Labrang monastery in Sangchu county in the Kanlho (in Chinese, Gannan) Tibetan Autonomous Prefecture in China’s Gansu province.
A Tibetan man living in the Labrang area said Tibetan laypeople and monks at the monastery were unhappy when they heard about the proposed visit.
The Labrang monastery, a key institution in Tibetan Buddhism, was the scene of widely publicized demonstrations against Chinese rule during regionwide protests in 2008.
“He was supposed to come sometime from July 20-30, but now people say he may come sometime in August or September,” the man told RFA on Friday.
“For now, because of widespread discontent among the local Tibetans—both laypeople and the monks at Labrang—preparations appear to have been suspended,” he said.
According to him, Tibetan staff at government offices displayed reluctance to support the visit even after Chinese authorities warned that they could be dismissed or have their salaries slashed for refusing to welcome him.
“Chinese authorities ordered Tibetan staff at the Sangchu (in Chinese, Xiahe) county offices to be ready to welcome him joyously, and offer scarves and prostrations," he said.
"Many were unwilling to do this, and authorities threatened to cut their salaries or even fire them if they refused to attend.”

Difficulty persuading
Chinese authorities have had difficulty persuading Tibetans to accept Gyaincain Norbu as the official face of Tibetan Buddhism in China.
Beijing named him to be the Panchen Lama in 1995 in a retaliatory action after the exiled Dalai Lama identified six-year-old Gendun Choekyi Nyima as the reincarnation of the second-highest monk in Tibetan Buddhism.
The boy selected by the Dalai Lama disappeared together with his family soon after and has not been heard from since. Most Tibetans believe Chinese authorities are keeping him in detention.
"The Chinese authorities [have been] telling the local Tibetans that they have to come out to welcome the Panchen Lama when he arrives,” a Tibetan woman living near Labrang said on Wednesday.
“A few years ago, the Chinese government brought the Panchen Lama to Labrang, but the local people refused to attend. This year, too, many Tibetans are saying that they won’t come out to show respect,” she said.
More than 1,000 Chinese police and security forces, including plainclothes police, were stationed around the monastery to prepare for the visit, she said.

Two Dalai Lamas?
Beijing has announced that upon the eventual death of the present fourteenth Dalai Lama, they will appoint his successor, raising the possibility of there being two Dalai Lamas—one recognized by China and the other chosen by exiles.
Gyaincain Norbu made his political debut in May last year at the annual session of the Chinese People's Political Consultative Conference (CPPCC) in Beijing, appearing as a national committee member of the top political advisory body.
He has also been made the vice president of China's state-run Buddhist Association.
The Tibetan government-in-exile and exiled Tibetans insist that Gyaincain Norbu is not the legitimate 11th Panchen Lama, since he was appointed by the Chinese government and is not acknowledged by the Dalai Lama as the reincarnation of the 10th Panchen Lama.
Reported by Sonam Wangdu and Chakmo Tso for RFA’s Tibetan service. Translations by Tsewang Norbu and Tamdin Wangchuk. Written in English by Richard Finney and Parameswaran Ponnudurai.
Posted by Claude Arpi at 11:44 AM