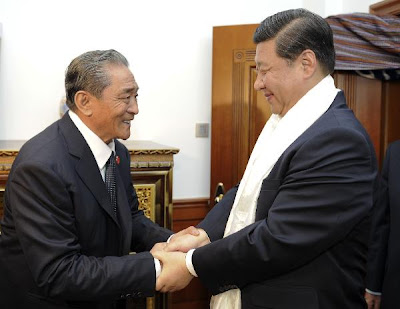 Vice-President Xi Jinping made it a point to visit the house of the old Tibetan hardliner Raidi.
According to Xinhua: "Chinese Vice President Xi Jinping, who is also a member of the Standing Committee of the Political Bureau of the Chinese Communist Party (CPC) Central Committee and vice chairman of the Central Military Commission, greets senior Tibetan leader Raidi, vice chairman of the Standing Committee of China's 10th National People's Congress (NPC), at Raidi's home in Lhasa, capital of southwest China's Tibet Autonomous Region."
Raidi has been the Chairman of Tibet Autonomous Regional People's Congress Standing Committee from 1993 to 2003.
This period saw large scale repression and since then Raidi has been considered as a hardliner amongst 'ethnic Tibetans'.
In 1994, Xinhua reported that on the occasion of the 10th anniversary of the promulgation of the so-called "Law of the People's Republic of China on Regional Autonomy for Minority Nationalities", Raidi declared that the law had "forcefully promoted economic construction and social stability in Tibet."
'Stability' has been  a key word in Communist jargon, but it is still missing in the daily life of the people of the Roof of the World.
At that time, Raidi gave figures for gross regional product in 1993, total agricultural and industrial output values and total import-export volume. He declared: "the people's material life and cultural life continue to improve", adding: "Beijing is to help build a number of key projects in the second half of this year. We should treasure the current hard-earned political stability and unity as we treasure our own eyes and we will not allow the existence of any kind of splittist activities; an attempt by a small number of splittist elements to promote Tibet Independence' and to reverse the wheel of history is very unpopular, is not allowed by law and is destined to fail ".
Seventeen years later, Tibet is still practically under a state of emergency.
The fact that Xi Jinping wanted to be seen with Raidi can be read two ways:
1- Xi Jinping has decided to follow the hardline started by Hu Jintao since the end of the 1980's.
2- Xi Jinping has no choice but to be 'nice' with the hardliners a year before his elevation to the supreme job.
Only the future will tell us what is in store for Tibet and the Tibetans.
By the way: have you seen the Chinese Panchen Lama around?

Chinese Vice President visits senior Tibetan leaders
LHASA, July 18 (Xinhua) -- Vice President Xi Jinping visited the homes of two senior Tibetan leaders and commended them on their devotion to building the new Tibet on Monday afternoon.
Xi, also a member of the Standing Committee of the Political Bureau of the Chinese Communist Party (CPC) Central Committee and vice chairman of the Central Military Commission, extended sincere greetings to Pagbalha Geleg Namgyai, vice chairman of the National Committee of the Chinese People's Political Consultative Conference (CPPCC), and Raidi, vice chairman of the Standing Committee of the 10th National People's Congress (NPC).
He noted that as senior leaders the pair enjoys high prestige and has made great contributions to the construction of the new Tibet.
"The Party and the government will never forget people like you, who have dedicated yourselves to the construction of the new Tibet," said the vice president.
Xi, arriving in Lhasa on Sunday, is heading a central government delegation to celebrate the 60th anniversary of Tibet's peaceful liberation.
Posted by Claude Arpi at 6:56 AM