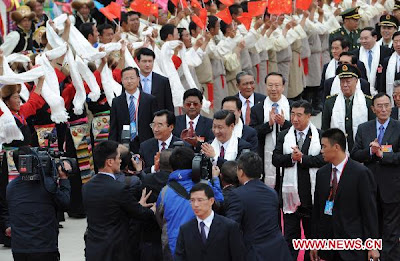 Very strange!
The main article in Xinhua (as well as other Chinese media) reported that "a delegation of China's central government arrives in Lhasa, capital of southwest China's Tibet Autonomous Region"; it did not mention the name of the head of the delegation.
His name sometimes appeared in the caption.
Xi Jinping, the Vice-President of the PRC and future Party General Secretary (as well future Chairman of the all-powerful Central Military Commission) paid his maiden 'official' visit to Tibet (he has probably been to Tibet as a kid when his father Xi Zhingxun was looking after Tibetan affairs in the 1950's, but Xi Jr was a toddler at that time).
In other articles, Xi's name is mentioned, but it remains strange why his name did not figure in the lead article.
Something to do with a not-so-smooth succession?
The Chinese ways are sometimes difficult to grasp. 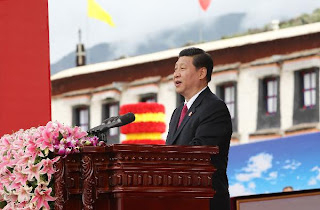 The old 'Tibetan' guard (Raidi, Pagpalha) traveled from Beijing with Xi, but also the PLA Chief.
Let us hope that it will be noticed in India.