Road to Progress or Road to a Dam? 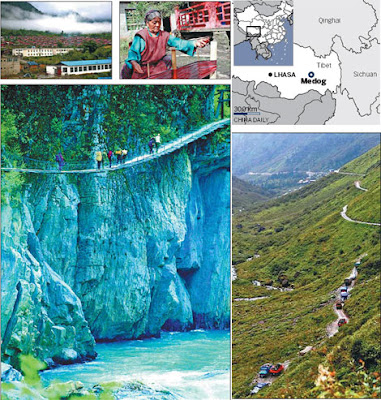 When I read this article Road to progress in The China Daily, it reminded me of something I wrote 10 years ago. I was then speculating about the possibility to build a mega in Metok area near the Indian boder of Arunachal.


In January 1998, , the German TV channel ZDF presented a feature on the Yarlung Tsangpo project, in a program entitled "Die Welt" [The World]. The Chief Planner, Professor Chen Chuanyu was interviewed. He described the plan to drill a 15 km (9.3 miles) tunnel through the Himalayas to divert the water before the U turn and direct it to the other end of the bend. This would shorten the distance of the approximately 3,000 meters altitude drop from 200 km to just 15 km. He explained that the hydropower potential of 40,000 Megawatt could be used to pump water to Northwest China over 800 km away.
An interesting aspect that we have briefly mentioned is that this area known to the Tibetans as Pemakö was considered to be a sacred area, rarely visited by outsiders. The difficulty of access to this unexplored region must have created one of the greatest obstacles for the engineers in Beijing. At the end of the 90’s, the Chinese government decided to permit foreigners to explore the Grand Canyon. The well-known National Geographic expedition, with ultra sophisticated materials and highly professional rafters made the first discoveries. Though it resulted in the death of an American kayaker, Doug Gordou in October 1998, it permitted a far greater knowledge in several previously unexplored parts of the gorges. Books and video footage of this expedition (as well as subsequent ones) certainly helped the Chinese planners to get a more accurate picture of the difficulty of the terrain (as well as the potentialities).
The opening of the area to adventure tourism was certainly the step of the preparatory work to find an approach way for dam site.
...The Telegraph justly warned: “China will have to overcome fierce opposition from neighbouring countries who fear that the scheme could endanger the lives and livelihoods of millions of their people. Critics say that those living downstream would be at the mercy of Chinese dam officials who would be able to flood them or withhold their water supply.”
According to the London paper, the cost of drilling the tunnel through Mt Namcha Barwa appears likely to surpass £10 billion. The article gives further details: “At the bottom of the tunnel, the water will flow into a new reservoir and then be diverted along more than 500 miles of the Tibetan plateau to the vast, arid areas of Xinjiang region and Gansu province. Beijing wants to use large quantities of the plentiful waters of the south-west to top up the Yellow River basin and assuage mounting discontent over water shortages in 600 cities in northern China.”
However, it seems that the proposal has drawn flak from several Chinese scientists. Yang Yong, a geologist who had explored the river, stated that the dam could become an embarrassing white elephant amid growing signs that the volume of water flowing in the Yarlung Zangpo could shrink over the years.
But in 2000, before becoming Premier Wen Jiabao had declared: "In the 21st century, the construction of large dams will play a key role in exploiting China's water resources, controlling floods and droughts, and pushing the national economy and the country's modernization forward. "
That was 10 years ago.
Today, with the opening of Metok (or Medog) to the rest of the world, the infrastructure is in place to construct a large dam.
The reversion scheme has in the meantime been shifted upstream on the Brahmaputra as it makes better sense to divert waters from a higher altitude. The dam however could produce the necessary power necessary for the diversion.


On the road to progress
China Daily
2011-07-28
Cheng Weidong
Medog in Tibet is the last county in China to be linked by highway. The highway's completion in 2012 will end the relative isolation of the area. Photos by Cheng Weidong / for China Daily
Clockwise from above: Medog was cut off from the outside world by difficult terrain, a volatile climate, frequent landslides, floods and avalanches; The county has long been regarded as one of the most challenging destinations, as access was mostly by foot; Rows of red-roofed houses now stand at the foot of the mountain in Medog; The Monba people follow a traditional way of life, an important part of which is weaving.
Medog in Tibet has transformed itself in just a decade from sleepy, cut-off county to a prosperous and environmentally aware tourist destination. Cheng Weidong reports.
The first time I visited Medog, a remote county on the southern slope of the Himalayas, in Tibet autonomous region, the only mode of transport was horses and human porters. That was in 1999.
The county, whose name means "lotus" in Tibetan, was cut off from the outside world by difficult terrain, a volatile climate, frequent landslides, floods, mudslides and avalanches.
At the end of 2010, I returned and the changes were dramatic.
Medog covers an area of 30,550 sq km. The Yarlung Zangbo river runs through it before flowing into India. Its population of 11,000 is made up of the Monba and Lhoba ethnic groups. To adventurers, it has long been regarded as one of the most challenging destinations to get to, as access was by foot and involved climbing Galongla Mountain.
When I visited Medog in 1999, I wrote in my notebook the Monba people living here had a primitive lifestyle.
A short, bumpy section of the old Medog highway was accessible by car two months of the year by experienced local drivers, but otherwise it was just horses and human porters transporting life's necessities.
On Dec 15, 2010, a two-year effort bore fruit when the Galongla Tunnel, the most challenging part of the Medog highway project, was completed. This will make it possible for a modern highway to connect with the county by 2012.
On my second visit there, we drove through the newly built tunnel. When our car drove slowly onto Medog's county road, which had a concrete surface, it was as if we were driving on smooth glass. Then someone pointed out a town on the mountain slope and said: "Here we are; it's Medog."
I could hardly recognize it. It was quite a different place from the small village in my memory.
The first thing I noticed was the newly completed "Good Life Lotus Square". Engraved on its monument are the words: "Medog is surrounded by mountains and its shape resembles that of a lotus." In Buddhism, the lotus is a symbol of auspiciousness.
Though the only consumer products from this area are stone pots and ebony chopsticks, it has abundant natural resources.
As we drove slowly through the town, I saw a hospital, police station, shops, restaurants, bars, Internet cafes, clothing stores, hair salons, guest houses and farmers' market.
We stopped at a new building, the Lotus Hotel of Medog, where we would stay during our visit.
On first night in the new Medog, we dined at a restaurant called Guests Bring Prosperity. The owner came to Medog from Sichuan province in 2003.
"It is good here," she said. "Medog has changed so much. Many things are less expensive now. You can buy instant noodles or a bottle of purified water for just 5 yuan (77 US cents)," the woman surnamed Xia told me.
It drizzled all night long, bringing back memories of my stay 11 years ago.
Back then, during Medog's rainy season, there was mud everywhere. The most impressive building was an auditorium constructed of reinforced concrete.
A businessman from Sichuan owned the largest store in town but goods were limited and prices were high. A chicken sold for as much as 100 yuan ($15.50), and a carton of cigarettes cost 600 yuan. The reason prices were so high was that all goods had to be transported by porters.
Now, there are more than 200 businesses in town and about 400 cars. There are two ring roads and a third one is being built.
The next morning, when I woke up around 6 am, it was still drizzling. I went to a vantage point nearby to take some panoramic photos.
The rain stopped. Medog was shrouded in mist. The surrounding rice paddies looked golden and the houses shimmered against the backdrop of the mountains. The view was breathtaking.
Then, I went to Medog Village, a Lhoba village of 89 households, to take more photos. The houses in the village are made of wood, and the 600 villagers still follow a traditional way of life. Even so, there are some 70 cars in the village and many villagers are involved in the transport business.
Qunzeng invited me into his house. He has three kids. His entire extended family has around 80 members. Qunzeng said the Lhoba people used to live by hunting and they fell trees to build houses and cook.
In order to protect the environment, the regional government compensates each Lhoba villager 5,000-6,000 yuan a year to switch to a more modern lifestyle and not hunt or fell trees. Thus a big family can get as much as 70,000 yuan a year.
When I stepped into Qunzeng's house, his aunt was sitting in the yard dressed in traditional Lhoba clothes to welcome me. Then, Qunzeng's brothers and his nephews and nieces stopped by. Seeing these three generations talking and hugging was a poignant snapshot of the life and times of Medog.
(China Daily 07/28/2011 page19)
Posted by Claude Arpi at 1:44 PM