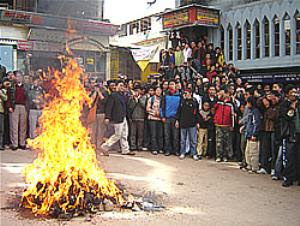 According to The People's Daily, the Dalai Lama is not serious in looking for a solution to the Tibetan issue.
Interestingly, the mouth piece of the Communist government announces that Vice-President Xi Jinping, who will replace President Hu Jintao in 2012, "will not ease Beijing's stance toward the region".
Perhaps not, but the truth is that since 2006, the Chinese government has given up the possibility to find a compromise with Dharamsala.
In February 2006, the Tibetan Envoys (lead by Lodi Gyari) met Zhu Weiqun, the Executive Vice-Minister of the United Front Work Department in Guilin City. According to the Tibetan side, the meeting dealt with substantive issues and “as a result, today there is a better and deeper understanding of each other's position and the fundamental differences that continue to exist in the position held by the two parties.”
Even if the delegates were not ready to admit it, the differences were insurmountable. A US Report to the Congress elaborated:


“In previous meetings, the envoys had requested to visit other autonomous regions of China, which is why Guangxi Autonomous Region was chosen. After the meetings concluded, Lodi Gyari reported that there was “a growing understanding between the two sides, though fundamental differences persisted.” However, he made clear that the Tibetans remained committed to the dialogue process and still hope that some progress was possible through continuous engagement.

The US report points out an interesting aspect: the optimism of the Tibetan Envoys. It says that in November 2006, Lodi Gyari gave a speech at the Brookings Institute in Washington, DC in which he “gave an air of general optimism regarding talks with Chinese officials.” But the Report rightly remarked:


“It remains to be seen, however, whether the optimism expressed in Mr. Gyari’s speech will be sustained. The dialogue did not produce concrete progress in 2006, and Beijing has continued its negative and unconstructive rhetoric concerning the Dalai Lama.”

For the outside, the Tibetan envoys kept a brave face but the Chinese were not interested any more in the negotiation process.
An incident had occurred in between which made change their mind.
Phayul.com, amongst others had reported the incident:


"In what is most daring display of loyalty and support to the recent call by the Dalai Lama to ban using tiger and leopard skins in Tibet, Tibetans in Amdo region in eastern Tibet are making bon fires out of their animal skin clothes.
A video image in CD smuggled out of Tibet, relay racing to India reached Dharamsala, the residence of the Dalai Lama, this morning. The 20-minute video image shows thousands of Tibetans gathered around a huge bon fire of
animal skins. Literally excited crowds throw their animal skin hats, shirts and cloak like dress "Chuba" on the fire.

Nagpa who brought the CD from Nepal after secretly meeting his counterparts at the Nepal-Tibet border said: "Tibetans in Tibet took great risks in making these images available to outside world and it reached here in record time of ten days." Ngakpa who arrived Dharamsala this morning, talked exclusively to Times of India. "Though there were many people, who shot the event on camera, there was immediate curb from the Chinese authorities on the photographic materials, confiscating cameras, and detaining who resisted" he said.


"The local Chinese authorities are left with no answers to the earlier such reports in World Wide Web. "Eight youth activist have been arrested for working in 'collusion' with Dalai Lama government" said Nagpa. However, they are expected to be released soon, as the group involved three Chinese youths also. On another note, the Chinese authorities have now started calling this as results of their environmental education. However, According to Nagpa the tension between the authorities banning such public gatherings only seems to be rising as bonfires are now being set in all the places in Amdo region or Tibet.

Phayul.com explained the motivations of the Tibetans:


"The reason seems to be obvious to ask. The Tibetan leader who was giving the Kalachakra blessings at Amravati recently called on the Tibetans to stop using animal skins like tiger and leopard. This was attended by about almost 10,000 Tibetans who came from Tibet especially for the Buddhist congregation. However, Nagpa says the Tibetans in Tibet are advocating clean environmental and loving animals as per the Buddhist way of life as reasons to ban animal skins for clothes form this New Year."

The Chinese had finally realized the Dalai Lama's tremendous influence on the Tibetan masses and the danger of any 'settlement' of the long-pending issue with the Tibetan leader.
The unrest in March/April 2008 comforted the Chinese in their position: "the central government will never make concessions", they continue to affirm today.
For internal consumption, they have to put the blame on the Dalai Lama.
But who believe them.
The Tibetan Center for Human Rights and Democracy wrote in its 2006 yearly report: "In early February and July 2006, it became evident that the Dalai Lama rules the hearts and minds of Tibetan people inside Tibet. In an instant reaction to a call by the Dalai Lama based in India banning use of wildlife skin, Tibetans burnt large quantities of garments made of animal pelt. Public bonfires of burning animal skin were reported from several parts of Tibet; Rebkong, Labrang, Kardze, Chantsa, Ngaba TAP, Kirti Monastery, and Lhasa."
The Chinese conclusion was (and is) "No use to continue talking to the Tibetans".

Dalai Lama not serious about talks with Beijing: report
BEIJING (Reuters)
Tibet's exiled spiritual leader the Dalai Lama is not serious about talking with Beijing, but the government will never make any compromises with him to get him back to the table, a major Chinese newspaper said on Tuesday.
China, while always keeping a tight grip on Tibet, has been more hardline than normal of late, as senior leaders gear up for a key leadership transition starting from late next year and take steps to ensure nothing distracts from that.
Vice-President Xi Jinping, who is widely expected to become president in 2013, gave a toughly worded speech last week in Tibet, suggesting that China's heir apparent to the presidency will not ease Beijing's stance toward the region.
The commentary in Communist Party mouthpiece, the People's Daily, continued in that vein, saying the Dalai Lama's recent remarks on his overseas visits show that he will never accept Beijing's preconditions for talks.
"The Dalai Lama's recent comments clearly show that their position is totally and diametrically opposite that of the central government," the newspaper wrote, referring to the exiled Tibetans.
"(He) has no sincere intention to talk, and no interest in talks. In reality, (he) has already completely blocked the path to talks," it added.
President Barack Obama's meeting with the Dalai Lama at the White House this month infuriated China, which brooks no "outside interference" in what it considers a purely internal matter.
China says that it will only talk about the Dalai Lama's personal future, but not with the government-in-exile, and that the Nobel Peace Prize laureate monk must renounce his support for Tibetan independence.
The newspaper used extensive quotes from the Dalai Lama to demonstrate his "inflammatory" support for Tibet's independence, and cited his suggestions that China's Communist Party had its day and should now step down.
The Dalai Lama says he wants only true autonomy for Tibet, something China says it already has.
"There is only one possibility, and that is that the Dalai Lama moves toward accepting the central government's demands, for the central government will never make concessions," the paper said.
China has held on-off talks with the Dalai Lama's envoys for several years, without any sign of progress.
China has ruled Tibet with an iron fist since 1950, when Communist troops marched in and announced its "peaceful liberation." The Dalai Lama fled to India in 1959 following a failed uprising, and unrest has continued sporadically ever since.
(Reporting by Ben Blanchard; Editing by Yoko Nishikawa)
Posted by Claude Arpi at 11:30 AM

Email ThisBlogThis!Share to TwitterShare to FacebookShare to Pinterest
Labels: The Negotiations that never were