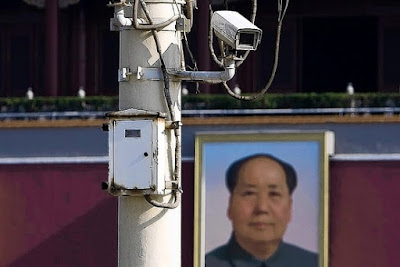 This article of The South China Morning Post is fascinating.
Chongqing was already made the headlines after Bo Xilai, the CCP rising star and Chongqing Party boss  encouraged the population to sing 'red songs'. This has apparently become the craze all over the Middle Kingdom.
An Op-ed in the China Daily explains:


Younger generations, may not be familiar with 'red songs'. These songs praise, compliment and commemorate the Chinese Communist Party, the People's Republic of China, and the various revolutions led by the Party. On the mainland, it is common that those more than 50 years of age can sing at least one or two 'red songs'. Songs can have evocative titles, such as 'The East is Red', 'There would not be the New China without the Communist Party', and 'Unity is Strength'.

More and more Chinese may know about the 'glorious' past of the Communist Party, but can Chongqing build a 'harmonious society' based on 500,000 cameras made in the US? This is another question.
The article asked: "Should companies be held accountable if foreign governments use their products for political suppression?"
Business is business. US companies will continue to seriously believe (or pretend to believe) that the cameras will only be used to built a peaceful society signing 'East is Red'.
What a shame!

Hi there excellent blog! Does running a blog such as this take a great deal of work?
I have absolutely no expertise in coding however I was hoping to start my own blog
in the near future. Anyhow, should you have any ideas or tips for new blog owners please share.

I understand this is off subject nevertheless I just had to ask.

Thanks a lot!
Visit my web-site ... gopro lens

wonderful work! the way you discuss the subject i'm very impressed. i'll bookmark this webpage and be back more often to see more updates from you.