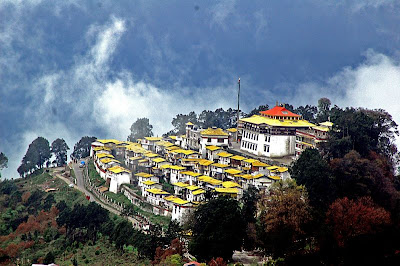 It is a difficult situation: Beijing always enjoys putting India into a corner.
On one side, it is tough for the karatekas to be unable to participate in an international competition, like any other citizens of India, but if Delhi starts accepting stapled visas, this will an admission that Arunachal Pradesh is a disputed area, when it is not.
Kiren Rijuju, the former young MP from Arunachal asked Foreign Minister S M Krishna to accept stapled visas "if some assurances on resolution of the border issues could be obtained from Beijing".
The problem is that Beijing will never give any assurance.
Another issue is that the Chinese government keeps changing its stance on the issuance of visas for Kashmir and Arunachal.
It is not easy to find a solution.
One should however note that General Chen Bingde, Chief of General Staff of the PLA (and member of the Central Military Commission) did not accompany Vice-President Xi Jinping to Nyingtri Prefecture, north of Arunachal .
He headed for Ngari (Western Tibet) with some other members of the delegation from Beijing. 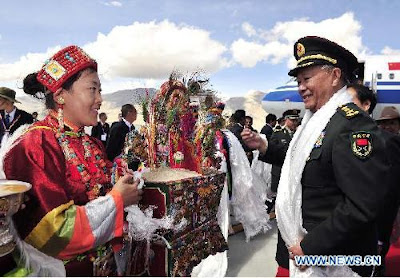 The Korean press reported that a few days earlier General Chen Bingde launched into a 15-minute tirade against the US during a meeting with South Korean Defense Minister Kim Kwan-jin. Chen would have said, "Being a superpower, the US says this or that to other countries, but it never listens when other countries express themselves in a similar way." Chen added the actions of the US suggest it wants to 'overpower' other countries.
South Korea considered Chen's comments as highly discourteous and violating the diplomatic protocol.
No report of his visit in Western Tibet (north to J&K and Himachal border) has appeared so far, except for the caption of this picture (Chen Bingde (R), chief of the General Staff of the Chinese People's Liberation Army, arrives in Ali [Ngari] of southwest China's Tibet Autonomous Region, July 21, 2011. Chen Bingde is in Tibet to attend celebrations marking the 60th anniversary of the region's peaceful liberation. (Xinhua).

Stapled visas better than no visas: Arunachal CM’s aide
TNN | Jul 23, 2011,
NEW DELHI: Disgruntlement over China's decision to issue stapled visas to Arunachal Pradesh residents took a new turn with former MP Kirren Rijuju suggesting that the visa regime be accepted, a stand supported by the state's Olympic association as well.
With a five-member karate team stopped from travelling to China for a competition, Rijuju wrote to foreign minister S M Krishna that stapled visas be accepted if some assurances on resolution of the border issues could be obtained from Beijing. It was hurtful when the karatekas were turned back from the airport, he said.
Rijuju, who is also principal advisor to chief minister Jarbom Gamblin, wrote to Krishna on Friday as a former MP. In response to a previous letter, Krishna informed Rijuju that "by following a two-track visa policy, China has disputed the legality of our international borders thereby impinging adversely on our national sovereignty as well as territorial integrity".
Arguing that there could not be any discrimination against Indian visa applicants on grounds of domicile, Krishna noted that the Chinese foreign office has categorically stated that Beijing's position was unchanged. "Our acceptance, thereby, of stapled visas would imply dilution of our stand towards Chinese claims," he said.
But Rijuju has again expressed apprehension that Arunachalese people may not be able to attend events in China and that India "may require a shift in its strategy without compromising on national interest".
The former MP argued that China was an important destination in economic terms and though he did not spell out how national interest could be safeguarded while accepting stapled visas, his position was echoed by the Arunachal Olympic Association. The AOA requested the Centre to accept stapled visas till the dispute was resolved.
"People of Arunachal Pradesh, especially sportspersons, should be allowed to travel to China with stapled visa until both the countries resolve the issue," the organisation's secretary general G Doke said, according to an agency report. The association and Rijuju's statements came on Friday.
"The incident is no less than a humiliation. People of this remote northeastern state have been repeatedly denied normal visas as if they were not Indian citizens," Doke said. The team, including officials, was on its way to Guangzhou to represent India at the Asian Karate-do Championship from July 20 to 25.
Rijuju was, however, issued a regular visa while visiting China during the Beijing Olympic Games in 2008. "I do not know how China changed its position again thereafter," he wrote to Krishna. Doke asked the Centre to resolve the visa problem with China without delay so that people of the state did not face the same problem in future.
Posted by Claude Arpi at 3:56 PM

How long this steply attitudes on Arunachaliees will prevail and shutters the prospects of our young Arunachalees?Why the UPA Govt is not doing anything to settle such strategic issues?