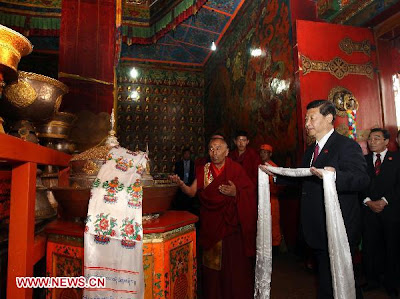 The final leg of Xi Jinping's one-week tour to Tibet was the Tashilhunpo monastery, the seat of the Panchen Lamas that the Chinese have traditionally tried to play against the Dalai Lamas.
As I noted earlier, Gyaltsen Norbu, the Panchen Lama selected by Beijing was nowhere to be seen in the entourage of Xi.
Norbu is said to be close  to Raidi, the hardliner who was TAR Chairman from 1993 to 2003; both are natives from the same area in Nagchu.
Gyaltsen Norbu usually spent a month every summer in Tashilunpo Monastery.
It is in the Tashilunpo that  the previous Panchen Lama (the Tenth) passed away in mysterious circumstances.
Several years back, Tibet Information Network published an analysis of his last speech:


"The Panchen Lama died during a rare trip in 1989 to the traditional seat of the Panchen Lamas in Shigatse. The trip was to inaugurate a memorial building constructed to house the tombs of the previous five Panchen Lamas.

The 51-year old Lama, who was not in good health, died a day later, apparently from a heart attack, according to Chinese statements.

His mother and father were taken to hospital with heart attacks the same day or the day before, and his senior tutor, also travelling with him, died from a heart attack the next day. This series of incidents led to unresolved doubts about the incident. A British pathologist commented at the time, "there is no such thing as an epidemic of heart attacks".

The Panchen Lama's last speech, of which a hand-written copy was sent to the outside world by Tibetan activists in Lhasa, is a powerful and uncompromising attack on ultraleftist tendencies in Chinese, and perhaps Tibetan, politics. 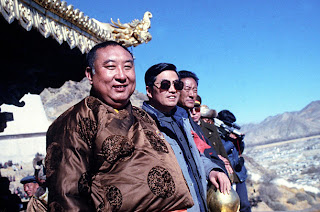 Although many Chinese dignitaries were present, the speech appears to have been given in Tibetan.
The Lama goes to great length in his speech to attack the politics which led to the destruction of the monasteries in Tibet, and appeared to dedicate the Mausoleum as a memorial to the destructiveness of earlier Chinese policy.
"This has caused very bad consequences both inside and outside the country", he says."These have all been systematically perpetrated under Leftist policies towards religion. This is a total mistake ... there is no doubt whatsoever that evil consequences will follow as a result of such mistakes," said the Lama, who did not suggest the mistakes or the consequences were already in the past.
Chinese leaders are allowed to criticise the excesses of the Cultural Revolution, although the language used here is unusually strong. But the Tibetan leader makes a number of insinuations which suggest that he thought the excesses were not limited just to the Cultural Revolution period. He says that "the despicable vandalism ... in Tibet and Tibetan-inhabited areas" had taken place "mainly during the 'Cultural Revolution' and other periods during the successive political upheavals."
"This is a total mistake committed both at the level of the collective and at the level of the individuals concerned", he said, in a phrase that could be read as a criticism of the Party as well as of the individuals involved.
The speech is deeply and powerfully religious in parts, and calls for a qualitative understanding of religious freedom which could be seen as an important critique of the Party's claim to have allowed religious freedom: "It is neither a renovation work [intended] merely to hold religious functions, nor is it an attempt to follow the old society's traditional custom of renovating and opening monasteries. Rather than feel concerned about the number of monasteries in comparison to the past, ... my primary concern is not the numbers of monks and nuns but rather their quality in terms of their adherence to strict religious discipline and pure moral responsibility..."

Hu Jintao, then Party Secretary of the Tibetan Autonomous Region was accompanying the Panchen Lama when this happened. This has given rise to all sorts of suspicions.
Vice-President Xi Jinping, whose father Xi Zhongxun was a friend of the Tenth Panchen Lama, went to deposit a khata (ceremonial scarf) on the stupa of the Lama. A simple, but powerful gesture.


Chinese vice president calls on religious circle in Tibet to promote patriotism, maintain national unity
English.news.cn   2011-07-23
Chinese Vice President Xi Jinping (R Front), who is also a member of the Standing Committee of the Political Bureau of the Chinese Communist Party (CPC) Central Committee and vice chairman of the Central Military Commission, talks with local people during a visit to Xigaze, southwest China's Tibet Autonomous Region, July 22, 2011. Xi, leading a central government delegation, is in Tibet attending celebrations marking the 60th anniversary of the region's peaceful liberation. (Xinhua/Lan Hongguang)
XIGAZE, Tibet, July 22 (Xinua) -- Vice President Xi Jinping on Friday called on the religious circle in Tibet to continue their efforts to promote patriotism and maintain ethnic and national unity.
He called on religious leaders and members to make joint efforts with other Chinese people in building a well-off society.
Xi, also a Standing Committee member of the Political Bureau of the CPC Central Committee, made the remarks during his visit with some members of the central government delegation to the seat of the Panchen Lama -- Tashilhunpo Monastery in Xigaze.
Built in 1477, the Tashilhunpo Monastery is one of the most important monasteries of Tibetan Buddhism, the dominant religion in Tibet.
Xi was welcomed by the monks of the Monastery. He paid homage to the stupa of the 10th Panchen Lama by presenting a "hada," a white scarf symbolizing best wishes.
During his visit in Xigaze, Xi also met with local leading government officials, retired officials, representatives of local residents and officers of the the People's Liberation Army (PLA), the police and the armed police forces.
Xi previously made an inspection tour to Xigaze in 1998 when he was the deputy provincial Party chief in Fujian, as part of the "pairing-up" support program for Tibet.
Xi said he is pleased with the progress and development in Xigaze over the past years and appreciates the efforts of the local CPC organizations, government departments and local people.
He called for more efforts to promote the "pairing-up" support program and to develop local agricultural and industrial sectors.
Efforts should also be made to improve the infrastructure and local people's lives, Xi said.
On Thursday and Friday, four other groups of the central government delegation visited Tibet's Nagqu, Qamdo, Lhasa and Ngari, respectively, and met with local officials and residents in these areas.
The 59-member central government delegation headed by Xi concluded the trip to Tibet on Friday and returned to Beijing.
The delegation left for Tibet last Sunday to attend a series of celebrations marking the 60th anniversary of Tibet's peaceful liberation.
Posted by Claude Arpi at 4:04 PM