Why Xi Jinping's visit to Tibet is important 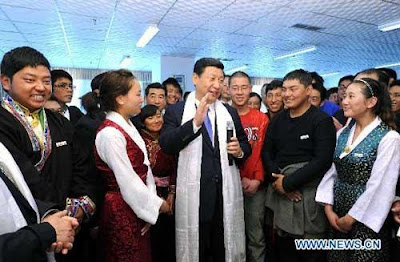 My article Why Xi Jinping's visit to Tibet is important is posted in Rediff.com.


Chinese Vice President Xi Jinping, who will takeover as president next year, seems to have realised that the past policy of repression can't solve the long-pending Tibetan issue, says Claude Arpi.

The visit of the Chinese Vice President Xi Jinping to Tibet to celebrate the 60th anniversary of the 17-point agreement between China and Tibet is important for several reasons.
First, in one year, Jinping will replace Hu Jintao as the President of the People's Republic of China; he will also assume the mantle of general secretary of the Chinese Communist Party and a few months later, he will take control of the all-powerful People's Liberation Army as the chairman of the Central Military Commission.
Jinping has then a strong past connection with Tibet through his father Xi Zhongxun who was responsible for Tibet's affairs in the 1980s. It is also a fact that visits to the Roof of the World by high dignitaries from Beijing are as rarified as the air on the plateau.
When he was still vice president in May 2001, Hu Jintao visited Lhasa (Hu was promoted to the supreme post). His speech was not very different from the one Jinping just delivered on the square in front of the Potala.
Hu had declared, "The peaceful liberation of Tibet was a major event in modern Chinese history and an epoch-making turning point in the course of development in Tibet. It symbolised that Tibet once and for all cast off the yoke of imperialist aggression and that the great unity of the Chinese nation and its great reunification cause have entered a new period of development. It ushered in a new era in which Tibet would turn from darkness to light, from backwardness to progress, from poverty to affluence and from seclusion to openness."
Ten years later, foreigners were not allowed into Tibet for a month around the visit of Jinping.