Xi Jinping and the stability of Tibet 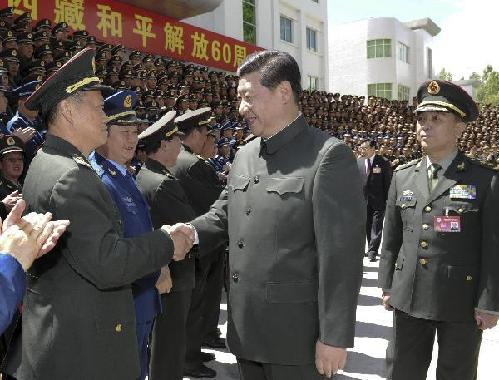 Xi Jinping's visit to Tibet continues.
The Vice-President met with the PLA officers serving in the 'autonomous' region. Once again he insisted on the 'stability', an euphemism for the problems facing China in their 'liberated' province.
Xi was accompanied by Chief of General Staff Chen Bingde, a member of the Central Military Commission who recently visited the United States and met the US top brass, but also other senior generals such as Wu Changde, the Deputy Director of the PLA General Political Department,
Tian Xiusi, Political Commissar of the Chengdu Military Region and more importantly Wang Jianping, Commander of the Police Armed Forces, responsible for the 'stability' in restive regions like Tibet or Xinjiang were in attendance.
General Wang is said to be one of Hu Jintao’s favorites. The new rising star was elevated twice in 2009 — from PAP chief of staff to Vice-Commander, and now Commander. He had also served as Commander of the Tibet Autonomous Region.”
Also present was Song Dan, the Deputy Director of the Central Military Commission and of the General Office of Legal Department.
Xi asked them to "improve their capabilities in taking preventative actions and handling emergency situations".
They have been quite 'busy' during the past few months, Tibet living in a practical state of siege.
As mentioned earlier, the Chinese Panchen Lama is not in list of invitees.
Ten years ago, when (then) Vice-President Hu Jintao came to Tibet, he met the young Panchen Lama in Shigatse.
Xinhua reported: "Hu Jintao and party also went to Tashilhunpo Temple, where they presented a hada [khata] at the soul tower [stupa] of the 10th Panchen Master, gave alms to the monks, and presented a copy of the Great Tibetan Scripture. Hu Jintao acknowledged the contribution the Tashilhunpo Temple has made to maintaining the unity of the motherland and its peoples. He urged the masses of the monks to abide by Chairman Jiang Zemin's instruction, 'protect the nation and benefit its people', to carry on the glorious tradition of the 10th Panchen Master's patriotism and love of teaching, and to continue to make new contributions to the steady development of Tibet. Hu Jintao indicated that he was extremely happy to see the 11th Panchen growing healthily, and that he was confident that the 11th Panchen would work hard to become a good living Buddha who loved his country and loved teaching."
Let us see if Xi visits Shigatse and the Tashilhunpo.

Chinese Vice President visits senior officers of PLA, police, armed police in Tibet
20 July, 2011
Xinhua
[caption] Chinese Vice President Xi Jinping, who is also a member of the Standing Committee of the Political Bureau of the Chinese Communist Party (CPC) Central Committee and vice chairman of the Central Military Commission, meets with officers of the army stationed in Lhasa, capital of southwest China's Tibet Autonomous Region. Xi, heads a central government delegation to celebrate the 60th anniversary of Tibet's peaceful liberation, greeted officers of armies and armed police stationed in Lhasa, local policemen and legal affairs officials here on Tuesday.
Vice President Xi Jinping on Tuesday visited senior officers of the People's Liberation Army (PLA), the People's Armed Police Force and the police forces stationed in Tibet.
Xi conveyed greetings from the CPC Central Committee, the State Council and the CMC to the officers.
Xi expressed his appreciation for their contributions to the security of the country's southwestern border as well as their contributions to the social stability and development of Tibet.
"The social stability in Tibet matters to the country's stability, and Tibet's security matters to national security," Xi said.
Xi called on the officers to always be sober-minded and improve their preparedness in safeguarding the national unity, security and in maintaining the stability in Tibet.
He asked the forces to take concrete measures to improve their capabilities in taking preventative actions and handling emergency situations.
He also told the officers to follow the country's ethnic and religious policies and strengthen ethnic unity in their work.
Posted by Claude Arpi at 8:07 AM

Being an optimist for the Tibetan cause, I have been touched but Xi Jinping's last sentence (He also told the officers to follow the country's ethnic and religious policies and strengthen ethnic unity in their work). Given his background, this is a very positive sign - if not a "main tendue" to the Tibetans - as he's asking the officers to respect the Tibetan culture. I do not remember the last time a Chinese leader has used such words with the Army in an open forum. The other "good news" is the absence of the Chinese Panchen Lama and I dare to see the hand of Xi Jinping, again sending a positive sign to His Holiness. Fingers crossed for next year's Chinese leadership succession!!
Erick