While India is busy with the legislative elections, China continues to frantically develop its infrastructure on the Tibetan plateau and at its periphery.
A couple of days ago, Xinhua announced, 'world's longest plateau rail tunnel completed'.
The Chinese news agency reported that the Xinguanjiao Tunnel, the world's longest plateau rail tunnel on the Qinghai-Tibet Railway, had been completed last week.
According to Zhi Changying, an official with the China Railway Tunnel Co. Ltd. (CRTC), a partner in the project, the 33 km tunnel is the longest rail tunnel in China.
It is a part of the Qinghai-Tibet Railway. It is located between Golmud in northwestern Qinghai province and the capital, Xining.
Except for the tunnel, the 763-km-long line was opened to traffic in November 2010.
It took some 7 years to the CRTC and the China Railway 16th Bureau Group Co., Ltd. (CRBGC) to built the tunnel which was the main 'bottleneck' on the Golmund-Xining railway line.
Liu Hairong, a CRBGC official admitted that the project posed several challenges for engineers due to high altitude, complicated geological conditions and tight budgets [sic].
Zhi Changying said that the tunnel will be opened to traffic at the end of 2014: "It will give a much-needed boost to the transportation capabilities of the high-profile Qinghai-Tibet Railway, which connects the northwestern Qinghai Province and Lhasa, capital of southwest China's Tibet Autonomous Region", stated the official who added that it will allow to better connect Qinghai and Tibet.
But that is not all.
The China Daily announced that the construction of a new road between Xichang (in Sichuan province) – Shangrila (in Yunnan province).
Te highway is expected to be started soon, 'with a planned construction period of five years'.
And when the Chinese say 5 years, it is usually 5 years.
The new highway will connect the Xichang-Panzhihua Highway with the Shangrila-Lijiang segment of the Xining-Chamdo–Dali highway.
It will start from the city of Xichang.
Let us not forget that the Xichang Satellite Launch Center (XSLC) is one of the main Chinese space vehicle launch facilities The launching pads are located some 64 kilometres, northwest of Xichang, Liangshan Yi Autonomous Prefecture in Sichuan.
According to Wikipedia: "The facility became operational in 1984 and is primarily used to launch powerful thrust rockets and geostationary communications and weather satellites. It is notable as the site of Sino-European space cooperation, with the launch of the first of two Double Star scientific satellites in December 2003. Chinese officials have indicated interest in conducting additional international satellite launches from XSLC. In 1996, a fatal accident occurred when the rocket carrying the Intelsat 708 satellite failed on launch from the Xichang Satellite Launch Center. Also, a 2007 test of an anti-satellite missile occurred from the center."
Is the new road linked with the satellite launch? Difficult to say!

The new highway will be 320 kilometers long. It will run through Yanyuan county in Sichuan province and the touristic Lugu Lake. More than half of the highway is located in Sichuan province.
The highway will have 97 super large, large and medium bridges and 24 tunnels; it will have four lanes all along; it is designed for a speed of 80 kilometers per hour.
This will be a new route linking Chengdu to Yunnan and Central Tibet (via Highway 318).
Once opened to traffic, it will only take two hours from Xichang to Lugu Lake. Chengdu, Sichuan's capital is 7 hours away from the picturesque lake.
The highway will connect National Highway 108 to National Highways 214 and 318. 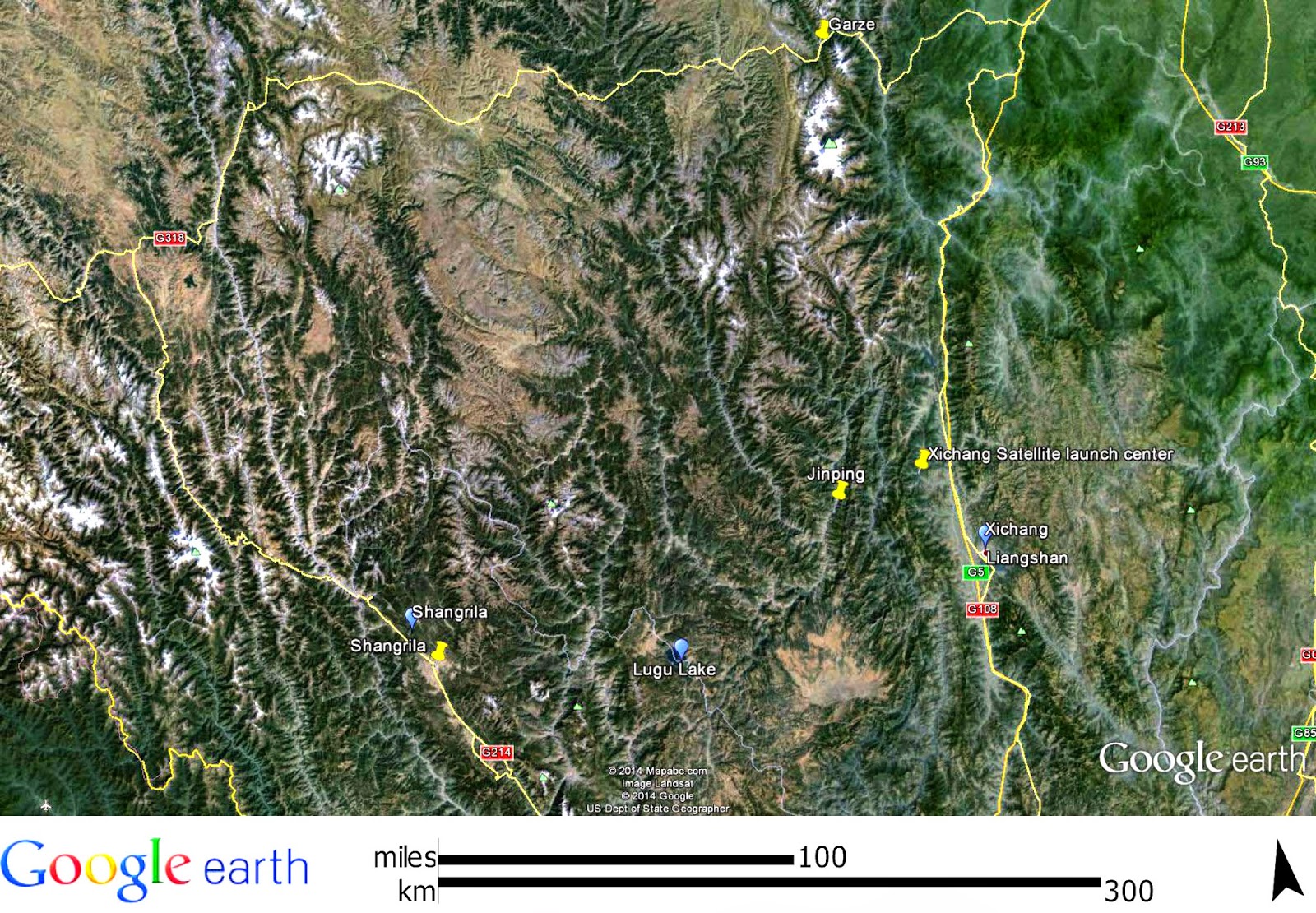 China National Highway 214 (G214) runs from Xining in Qinghai province to Yunnan. It is 3,256 kilometres long. From Xining it goes southwards to southeastern Tibet (Yunnan province).

China National Highway 108 (G108) connects Beijing to Kunming via Chengdu. In Beijing it is known as Jingyuan Road. It is 3,338 km long. Xichang is located approximatively half way between Chengdu and Kunming.
Posted by Claude Arpi at 7:27 AM