Kyirong: A New Gate to Nepal

Last week, The Sunday Review of the The New York Times published an Editorial on Nepal entitled 'Doing China’s Bidding in Nepal'.
It quotes the Human Rights Watch (HRW) report which "shows how far Nepal has gone in capitulating to Chinese pressure in cracking down on Tibetan residents and refugees. "
The report gives 'a long list of shameful actions against Tibetans in Nepal, including restrictions on their activities and movements, surveillance and intimidation, arbitrary detention and forcible return to China."
The New York Times asserts: "In effect, Nepal has turned itself into a partner of China’s anti-Tibetan policies."
To quote from a section of the HRW Report, entitled 'Chinese Pressure on Nepal':


It is no surprise that China would pressure Nepal to push back Tibetans or to crackdown on their political activities in Nepal. Beijing continues to assert that the 14th Dalai Lama and supporters of the Tibetan cause in exile or abroad play a major role in seeding discontent among ethnic Tibetans in China. It also continues to see this purported negative influence as a substantial hurdle to inculcating the kind of undivided political loyalty to the Communist Party and the state that it would like to see among Tibetans in China. For these reasons, measures to limit foreign and cross-border influence have featured prominently in the policies that Beijing has meticulously deployed since the 2008 protests.


These policies have included militarily sealing off Tibet’s international borders to end the constant trickle of Tibetans fleeing the region. The approach seems to be working: the number of Tibetans crossing the border has dropped from an average of 2,200 per year before the 2008 protests, to under a thousand between 2009 and 2012, to 171 in 2013. The available evidence suggests that Tibetans detained by Chinese authorities for crossing the border irregularly from Nepal are routinely imprisoned and physically abused in China.

But that is not all:


Chinese authorities have confiscated the passports of many Tibetans and require that all Tibetans submit to pre- and post-trip debriefings with police as a condition of international travel. They maintain registers of Tibetans who have family members abroad. Tibetans within Tibet must now also endure rigorous scrutiny before obtaining domestic travel permits. In recent years Tibetans have been arrested and sentenced for passing, receiving, or simply consuming information critical of China’s policies in Tibet.

The Chinese are now present everywhere in Nepal. The Report says:


There is now substantial evidence of increased Chinese government onitoring and censoring of telecommunications, Internet activity and messaging, and increased limitations on access to foreign Tibetan language broadcasts through the jamming and confiscation of satellite reception dishes. Chinese authorities have also stepped up efforts to prevent Tibetan communities in neighboring countries from assisting, documenting, or protesting conditions in the Tibetan Autonomous Region (TAR) and adjoining provinces with significant Tibetan populations. As detailed below, China frequently imprisons, and tortures or otherwise mistreats Tibetans who leave China without permission.

And of course the Chinese government's main goal is to suppress the influence of the Dalai Lama.
The human rights group affirms that Beijing has had three primary objectives:


1. Ensuring Nepal’s effective cooperation with China’s efforts to put an end to clandestine border-crossing by Tibetan asylum seekers and migrants, including children sent to study in Tibetan schools in India by their families;
2. Enforcing a de-facto ban on pro-Tibetan political mobilization in Nepal, including demonstrations and all activities linked to the Dalai Lama or Central Tibetan Administration (the Tibetan government-in-exile);
3. Enrolling Nepal’s intelligence and law-enforcement apparatus to monitor and infiltrate Tibetan communities living in Nepal, as to provide up-to-the-minute intelligence for China.

The New York Times comments: "Tibetans in Nepal know that wherever they gather to socialize or worship, they are likely to be spied on by Nepalese security forces who make no secret of their close links with Chinese authorities. Non-governmental organizations that seek to monitor the situation or are engaged in humanitarian work with Tibetans in Nepal are also under surveillance and have been accused of disloyalty."
Even after the democratic election of Sushil Koirala as prime minister, harassment of the Tibetan refugee population continues.
The New York Times concludes: "The government of Nepal has every right to seek positive trade and diplomatic relations with China. But it must stop allowing China to dictate policy regarding Tibetans in Nepal. Mr. Koirala and Nepal’s Constituent Assembly should move quickly to guarantee resident Tibetans legal status that respects their basic rights, and to treat Tibetan refugees in accordance with Nepalese and international law."

Wishful Thinking?
It appears wishful thinking because Nepal's all-important economic relations with the giant northern neighbour will soon get a tremendous boost when the Kyierong (Chinese: Gyirong) land port opens.
A few days ago, the official China Tibet Online reported: "The Gyirong Port in southwest China’s Tibet bordered with Nepal will be formally opened in October this year. The opening of the Gyirong Port has been listed in the key work plan of national ports in 2014."
The website also announces that a cross-border China-Nepal Gyirong Port Economic Cooperation Zone will soon be established; further the Gyirong Port will be built into a tourist destination.
The website affiliated with Xinhua continues: "The Gyirong Port enjoys a long history of being the largest land trading port between Tibet and Nepal. Many shop owners have expressed their hope that the opening of the port can help them get more involved in the border trade. From May 2007, the Shigatse Customs House will dispatch four officials to station at the Gyirong Port. A regular coordination system had been set up in order to seek support from the Gyirong county government, the Gyirong Customs and the Risur Customs of Nepal. Besides, the officials have been trying to promote preferential trade policies to encourage the local people to participate in the border trade. And some training have been provided to the port officials in Zham Customs House, another Class A port next to Gyirong in south Tibet’s Shigatse Prefecture."
What will be the consequences of the opening of a new port between Tibet and Nepal?
First and foremost, it means new infrastructure on both side of the border.
Dong Mingjun, a vice president of the Tibet Autonomous Region told the press: "By the end of July this year, construction of roads, energy and medical appliances will be completed at the port. The Gyirong Port will be equipped with special facilities for supervision and smuggling suppressing in preparation for the opening of the port."
But more importantly, a month earlier (in September)  the Lhasa-Shigatse Railway will be inaugurated.
China affirms that "the Gyirong Port will serve as a link between China and the South Asian countries. It is expected to bring a big number of visitors into Tibet and boost its tourism, which will help enhance the port’s popularity home and abroad."
The Party boss of the Gyirong County told the press: "The opening of the Gyirong Port will become a key trading port next to Zham Port in Shigatse, and an important destination for international trekking, folk activities and visitors’ driving tours."
In other words, Chinese tourists and goods will be poured into Nepal through the Lhasa-Shigatse railway line and then a highway between Shigatse and Gyirong (a branch of the highly-strategic  G219 highway linking Tibet to Xinjiang, i.e. the Aksai Chin Road).
The Chinese officials believe that "the Gyirong Port will be opened wider to the outside world with improved operation capacity in order to promote trade with South Asia and become a cross-border economic cooperation zone between China and Nepal."

As I mentioned in an earlier post, the message is clear, even if there is nobody to hear it in Delhi: Kathmandu, once the secluded ex-Kingdom is connected by rail to the Tibetan Autonomous Region, is interested to import petroleum products from China.
Nepal still remembers the unwise economic blockade put in place Rajiv Gandhi.
More interesting, a couple of years ago, a Nepali government statement mentioned that “an expanded and enhanced connectivity between the two countries [will] also open the avenues for Nepal being a transit country between the two giant economies, China and India."
Has India been asked?
China boasted that as early as 789 AD, Gyirong served as a hub for commercial and cultural exchanges between Tibet and Nepal (it might be true, though China was not around at that time).
However in 1961, the Gyirong Port of Entry obtained from Beijing the approval to open to the outside world; Gyirong was upgraded to a national first-class (A Grade) land port of entry in 1987.
By the end of 2008, Gyirong's imports and exports of had reached 0.67 million U.S. dollars.
In 2013, the volume of border trade between Tibet and Nepal reached 114.1 US dollars, an increase of 10.8 percent over the previous year.
Till now, the transactions in Gyirong represented only a small percentage of it; this will change with the opening of the new land port.
The strategic relations are also improving fast.
China Military Online reported  that on February 21, 2014, Girija Prasad Koirala (it meant Shushil Koirala!!!), prime minister of the Federal Democratic Republic of Nepal met with General Wang Guanzhong, the deputy chief of general staff of the Chinese People’s Liberation Army (PLA) in Kathmandu.
According to the Chinese agency, Koirala said that "Nepal and China have long been maintaining good neighborly relations, and Nepal regards China as a reliable friend and partner, and thanks China for providing long-term selfless help and assistance in economic and social development of Nepal".
It is not necessary to comment of the 'selflessness' of Beijing.
Koirala added that "The new government of Nepal will always develop its relations with China on the basis of the Five Principles of Peaceful Coexistence as before, continue to firmly pursue the one-China policy and not allow any force to engage in anti-China activities by using the territory of Nepal."
It is what General Wang Guanzhong wanted to hear.
He profusely thanked Kathmandu "for Nepal’s long-term and firm support on issues concerning China’s core interests such as that on Tibet."
He assured the new Nepali Prime Minister: "The Chinese military is willing to strengthen the pragmatic cooperation with the Nepalese military in the new historical period so as to make contributions to the development of the relations between the two countries."
This is quite ominous for the Tibetan refugees. 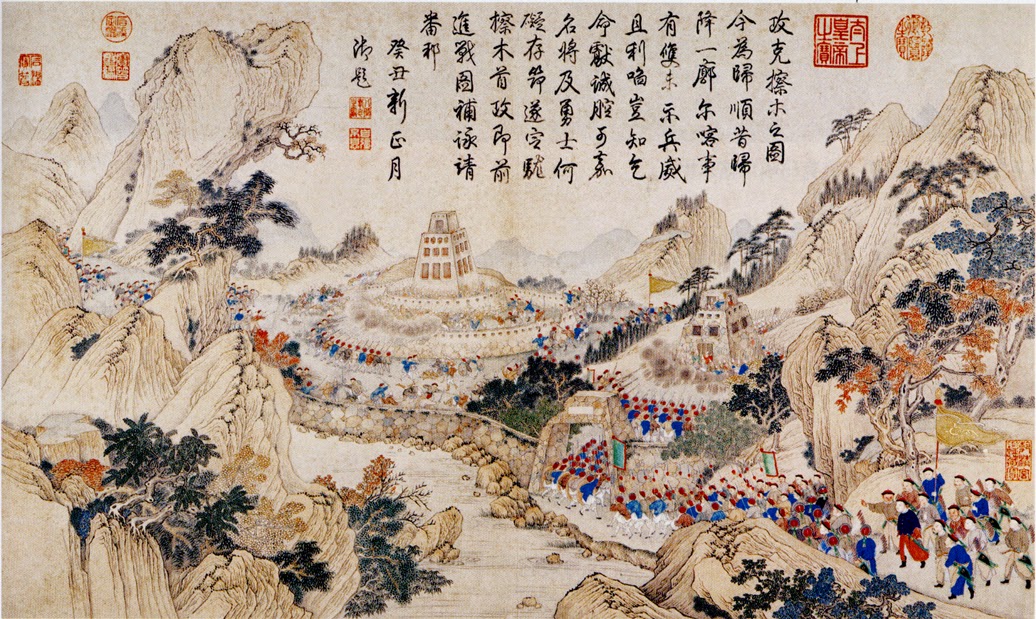 By the way, during the 1792 Tibet-Nepal War (in Chinese: 平定廓爾喀, 'pacification of Gorkha') , the Manchus troops called by Tibet to defeat the Gorkhas used Kyierong route to invade Nepal.
There is of course no connection with today's situation!