Is Bhutan too happy? 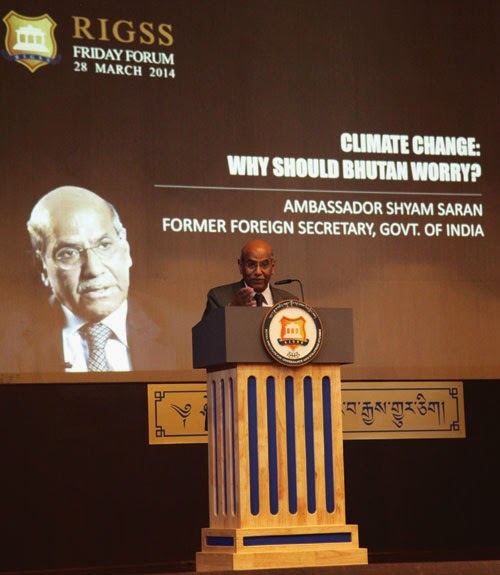 If you google 'Bhutan', you will find hundreds of articles such as this one, "Discover a kingdom where happiness rules".
The question is: how long will it last?
If one believes the news report, soon the dam companies will rule the Kingdom of the Dragon.
Will the society remains ‘happy’ and contented?
Recently, the Royal Institute for Governance and Strategic Studies (RIGSS) discussed the issue by inviting Former Indian foreign secretary Shyam Saran for a lecture entitled "Why Bhutan should worry more about climate change?"
The lecture/discussion touched subjects as hydropower, national revenue, biodiversity, livelihood and indirectly ‘happiness’.
But in the meantime, the construction of dams is going at a mad speed.
I had earlier written about the difficulties faced by the Punatsangchhu I project.
It has now been announced that by the end of 2014-2015 fiscal year, 77 percent of the work on Punatsangchhu I hydropower plant will be completed, 62 percent on the Punatsangchhu II plant and 55 percent on Mangdechhu, while the Dagachhu dam will be commissioned.
The Bhutanese Economic affairs minister Norbu Wangchuk and the Prime Minister recently signed 'a performance agreement' to make sure the targets are reached.
It is said that above objectives will be attained "if the economic affairs ministry is able to fulfill the performance agreement signed with the prime minister".
Economic affairs minister Norbu Wangchuk was more prudent; he said that the targets take into consideration under 'normal circumstances'.
He also stated that since the performance management system was being implemented for the first time, the targets might have been over-rated: “Lack of collaboration from agencies and fund constraints may act as a barrier in achieving the targets.”
He added that if, ‘due to unavoidable circumstances’, a ministry was unable to realise its target, the targets would be revised and improved during the following year.
What are these unavoidable circumstances?
As discussed in my previous posting, often the dam companies have not done their home work, in terms of geological and environment assessment, with catastrophic effects for the project and the environment.
According to Kuensel: "The minister also agreed to create a conducive environment to do business by amending a few Acts, introducing new ones and instituting a consumer protection board among others."
A 'conducive environment to do business' is usually not conducive to what Buddhists consider as 'happiness'; in fact this may lead to temporary 'sukh' (happiness) for a few, for a short time, but could lead to 'sukh' (suffering) for most stakeholders for ages to come.
Will the Kingdom of the Dragon able to find a Middle Path?
Doubtful!
For the time being, the Prime Minister explained that the purpose of the agreement was not to make one ministry compete against another, but to make each ministry compete against its own target.
Bhutan may achieve its objectives in matter of energy and revenue, but what about the traditional happiness, is the rivers disappear?
By the way, the period of 'sukh' is probably finished for the bosses of the Three Gorges Dam project.
The South China Morning Post reports: "The company released a statement saying its chairman, Cao Guangjing, had been removed from his position and would be given another role, without providing further details. It also announced the removal of its general manager Chen Fei."

I am reproducing below the article on Syam Saran's lectures published in Kuensel, the Bhutanese newspaper.

The ambassador was a guest speaker at the second Friday Forum held at the Royal Institute for Governance and Strategic Studies (RIGSS) in Phuentsholing on March 28.
The impacts of climate change in a place like Bhutan, he said would be in the form of accelerated melting of glaciers, a risk the country was already facing.
“This risk, at any time, can lead to landslide, avalanches and glacier lake outburst floods (GLOFs),” he said.
The country, he said had already suffered two major GLOFs in 1994 and 2004 and that more such dangers were impending because it had nearly 3,000 glacial lakes.
The subsequent vulnerability, the ambassador said was on the hydropower front on which the country was dependent heavily for much of its revenue.
The Bhutanese government, he said used roughly 40 percent of total revenue earned from hydropower.
The country’s three major projects of Kurichhu, Chukha and Tala, he said together had a capacity to generate about 1400MW of power that translated to Rs 1B a year.
There were more projects, he said in the pipeline projects, which by 2018 would generate more than 2900MW of electricity.
“By 2020, these project together may generate Rs 40B,” he said, adding that climate change, which might cause increased flooding or shortage of water, would impact the country’s revenue from hydropower.
Increase in breeding of tropical pests and malaria strains in higher altitude because of to rise in temperature he said were other consequences.
Climate change, he said would also have major consequences on wildlife conservation and a protection.
“We’re perhaps moving to a situation where because of the change in glaciology of the Himalayas, some of the perennial rivers may even end up being seasonal rivers,” he said, adding this would have major consequences on livelihood.
“All these impacts are beyond the control of national authorities since their source is global,” he said. “So the burden falls on national adaptation measures.”
The ambassador lauded the country’s efforts towards environmental conservation, installation of early warning systems, 24 weather stations to monitor weather patterns and its recent initiative to bring in electric cars to reduce pollution levels on the streets.
Delving a bit into history, Ambassador Shyam Saran said the global climate change was impacted because of burning of carbon-based fossil fuel on a larger scale, since the dawn of industrial age over two centuries ago.
Because of the damage that has been done already, he said even if carbon-based emissions become zero because of some miracle, the accumulated carbon emissions would still linger and climate change would continue to take place.
“This is why it is not just important to cut down emissions, but it is as important to adapt to climate change,” he said.
Considering that global climate change leads to a cross-national boundaries, he said it was important to work together on ensuring the ecological integrity of both existing and planned hydropower projects.
“If we want collaborative responses, instead of competitive ones, we need a significant change in mindset, the way we think about this problem,” he said. “It is in the midst of uncertain changes and increasingly complex environment that we must deal with the challenge of a global climate change.”
Meanwhile the second SLEP course ended yesterday.
Posted by Claude Arpi at 6:39 AM