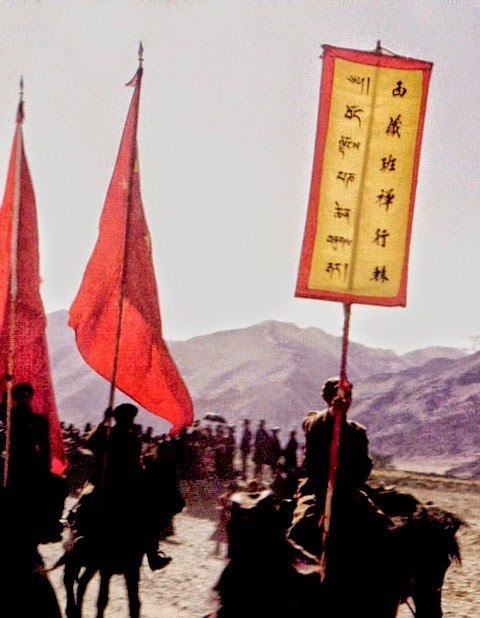 A Prime Ministerial ‘candidate’ and his family have, recently, been telling the media that the ongoing elections are a choice between 2 visions of India. The history of India’s foreign affairs shows something different. Since independence, India had two choices, the so-called visionaries and the pragmatic leaders like Sardar Patel, who cared for India’s interests on the ground.
I recently came across a bunch of old ‘personal’ letters written by some Indian officers posted on the frontiers in the early 1950s. These missives are telling. In December 1950, a few weeks after the PLA entered Tibet, Harishwar Dayal, a senior ICS officer and distinguished diplomat, then posted in Gangtok as Political Officer responsible for Tibet, Sikkim and Bhutan, while discussing the Chinese advance towards the McMahon Line with his Indian Trade Agent (ITA) in Gyantse, informed the latter of Sardar Patel’s death, “It is a heavy blow. He was the one person in this Government who had strong realistic view of things, including on foreign relations. Now, we are left at the mercy of the visionaries.”
This remark came back to my mind a few days back, when I read in The Republica, a Nepali newspaper: “China has turned down India’s proposal to establish its Consulate General Office in Lhasa of Tibet.” The proposal was presented by Sujatha Singh, the Indian Foreign Secretary during the 6th India-China strategic dialogue held in Beijing.
According to The Republica, after meeting her Chinese counterpart, Deputy Foreign Minister Liu Zhenmin, Singh told the reporters, “India will now plan a decisive talk with China in this regard.” It probably signifies that the outgoing Government is ready to drop the idea of reopening the Lhasa Consulate (Nepal, today, is the only country to have a Consulate General Office in Lhasa).
Why? Simply because the idea of having an Indian Consulate General irritates the Chinese!
Otherwise, the bilateral situation is rosy. Mister Liu affirmed that China is ready to work with India to advance the partnership to a new level, while Singh explained “all political parties in India share a common ground on advancing India-China strategic cooperative partnership.”
Xinhua added: “He [Sujatha Singh!!!] reiterated the Indian Government’s view of attaching high priority to its relations with China. He [sic] said that the Indian Government is working to consolidate the strategic cooperative partnership that is oriented to peace and prosperity.”
It appears that Delhi is now backing down on its earlier demand of re-opening the Lhasa Consulate and would be satisfied with another Consulate General in Chengdu (Sichuan) or Kunming (Yunnan province) instead of Lhasa. This remains to be confirmed.
While Beijing is extremely keen to open an office in Chennai, Delhi thought that it made sense to re-open the old mission in Tibet (today, India has two Consulate General Offices in Shanghai and Guangzou).

The history of the Consulate in Lhasa is truly the story of blind ‘visionaries’. India had a full-fledged Mission in Tibet till the end of 1952. Apart from the Mission in Lhasa, there were three Trade Agencies managed by ITAs in Gyantse and Yatung (in Chumbi Valley, near the Sikkim border) and a seasonal one in Gartok (Western Tibet). Till 1954, the ITAs in Gyantse and Yatung were entitled to a military escort. The Post and Telegraph Service, a chain of rest-houses and the principality of Minsar (near Mt Kailash) were also under the Indian Government’s control. Over the years, all this was ‘offered’ to the Chinese, without any compensation or even an attempt to obtain a fair settlement on the border issue.
Soon after Tibet’s invasion, the Indian Government found it increasingly difficult to retain these facilities on the ground. Visitors, traders and officials from India began to be unnecessarily and regularly harassed or put to hardship. The visionary Prime Minister was ideologically not comfortable with what he called ‘imperialist sequels’, though he knew that these ‘privileges’ were useful for trade, as was the McMahon Line which was a proper delineated agreed border between India and Tibet.
In summer of 1951, KM Panikkar, the Indian Ambassador to China, another great ‘visionary’, came to Delhi for consultations. By that time, he was already fully in love with the Communist regime in Beijing. Jawahar Lal Nehru, too, was convinced that the future of India lay with the East, “For the first time, China possesses a strong Central Government whose decrees run even to Sinkiang and Tibet. Our own relations with China are definitively friendly.”
A few months later, when questioned again on the Indian Mission in Lhasa, Nehru vaguely answered that it was dealing “with certain trade and cultural matters more or less [sic!]”. He also declared that he was not aware of “any infiltration of Chinese troops in India.”
Reports had already begun about Chinese incursions through the UP-Tibet border (today’s Uttarakhand) as well as through the Ladakh-Tibet border. The first Chinese surveys for the Sinkiang-Tibet highway cutting through the Aksai Chin occurred at that time. Though, Nehru was informed by LS Jangpangi, the ITA in Gartok, he chose to ignore it.
In June 1952, Nehru became more prudent; he explained the ‘changed circumstances’: Tibet was no longer an independent country, therefore, it was better to downgrade the diplomatic relations between Tibet and India. The Indian Representative in Lhasa was re-designated as a Consul-General.
During the same month, the smart and suave Zhou Enlai told the gullible Indian Ambassador in China that he “presumed that India had no intention of claiming special rights arising from the unequal treaties of the past and was prepared to negotiate a new and permanent relationship safeguarding legitimate interests.”
Not only did the Chinese offer nothing to India in exchange for her generosity, but Delhi accepted to open a Chinese Consulate in Bombay. Can you believe it!
A few months later, Panikkar who had been transferred to Egypt wrote: “the main issue of our representation at Lhasa was satisfactorily settled… there was no outstanding issue between us and the Chinese”.
Well, the ‘visionary’ had merely forgotten the unsettled issue of border. In April 1954, the ‘born-in-sin’ Panchsheel Agreement was signed. Though, the status of the Consulate General and the Trade Marts was confirmed, all the other privileges enjoyed by India were surrendered. Over the years, the situation became more and more untenable for the Indian officials. After Dalai Lama took refuge in India in 1959; the Chinese authorities constantly harassed the staff of the Consulate and Trade Marts. When the Panchsheel Agreement lapsed in April 1962, there was no point in renewing it. The Trade Marts were closed and China asked the officials to vacate the premises. As the building in Yatung belonged to the Government of India, the Chinese even asked India to take the building away.
Since then, there has been no Indian representation in Tibet. It is a great pity for the Himalayan areas which, for centuries, had close economic and cultural ties with Tibet.
Posted by Claude Arpi at 5:38 AM