Neville Maxwell and the Chinese leadership 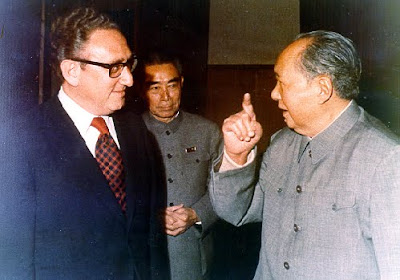 Neville Maxwell is going around saying that the Henderson-Brooks-Bhagat Report proves that Nehru 'attacked' China.
It is, of course a non-sense, even if one accepts that the fact that Indian troops may have crossed what the Chinese perceived as the international border, many other factors have to be taken into consideration.
It includes the flight the Dalai Lama in March 1959 and the refuge offered by the Government of India to the Tibetan leader and his followers and more importantly the internal situation in China after the Great Leap Forward.
In previous articles, I have dealt with this issue, particularly in an article for the Indian Defence Review,Why Mao attacked India in 1962.
The fact remains that Neville Maxwell has for years been very close to the Chinese leadership as the documents from the US archives posted below show.
I reproduce here an old posting on the subject which was published 4 years ago.

There are many ironies in the Henderson-Brooks Report saga. One of them is that it was given to a foreign journalist, Neville Maxwell the author of India’s China War (New York: Pantheon Books, 1970).

He was (and probably still is) kept in high esteem by the Chinese leadership as these two memoranda of conversation demonstrates. The remarks of Premier Zhou Enlai are both from 1972.
The first one occurred during the Nixon's visit to Beijing in February and the second one when NSA Henry Kissinger visited again China in June.
It makes interesting reading. No doubt that the Chinese have a copy of the Report. The question remains, who has given a copy of the Henderson-Brooks report to Maxwell and why.

…Prime Minister Chou: Actually the five principles were put forward by us, and Nehru agreed.
But later on he didn’t implement them. In my previous discussions with Dr. Kissinger, I mentioned a book by Neville Maxwell about the Indian war against us, which proves this.

President Nixon: I read the book.

Dr. Kissinger: I gave it to the President.

President Nixon: I committed a faux pas—Dr. Kissinger said it was—but I knew what I was doing. When Mrs. Gandhi was in my office before going back, just before the outbreak of the war [1971 Bangladesh Liberation War], I referred to that book and said it was a very interesting account of the beginning of the war between India and China. She didn’t react very favorably when I said that (Chou laughs).

Prime Minister Chou: Yes, but you spoke the truth. It wasn’t a faux pas. Actually that event was instigated by Khrushchev.

President Nixon: You think it was? Khrushchev?

Prime Minister Chou: He encouraged them. Mr. Holdridge probably knows this. He has studied it.

Mr. Holdridge: I can remember the editorial that came out in the press.

Prime Minister Chou: In looking at 1962, the events actually began in 1959. Why did he go to Camp David? In June of that year, before he went to Camp David, he unilaterally tore up the nuclear agreements between China and the Soviet Union. And after that there were clashes between Chinese and Indian troops in the western part of Sinkiang, the Ak-sai Chin area. In that part of Sinkiang province there is a high plateau. The Indian-occupied territory was at the foot of the Karakorums, and the disputed territory was on the slope between.

President Nixon: They attacked up the mountain.

Prime Minister Chou: We fought them and beat them back, with many wounded. But the TASS Agency said that China had committed aggression against India. After saying that, Khrushchev went to Camp David. And after he came back from Camp David he went to Peking, where he had a banquet in the Great Hall of the People. The day after the banquet he went to see Chairman Mao. Our two sides met in a meeting.
At that time our Foreign Minister was Marshal Chen Yi, who has now passed away. Marshal Chen Yi asked him: “Why didn’t you ask us before releasing your news account? Why did you rely on the Indian press over the Chinese press? Wasn’t that a case of believing in India more than us, a fraternal country?”
And what did Khrushchev say? “You are a Marshal and I am only a Lieutenant General, so I will not debate with you.” He was also soured, and did not shake hands when he left. But he had no answer to that. He was slightly more polite to me.

President Nixon: To the Prime Minister?

Prime Minister Chou: Yes. He said: “The casualties on the Indian side were greater than yours, so that’s why I believe they were victims of aggression.” If the side with the most casualties is to be considered the victim of aggression, what logic would that be? For example, at the end of the Second World War, Hitler’s troops were all casualties or taken prisoner, and that means that Hitler was the victim of aggression. They just don’t listen to reason.
So they had no way of passing this away, and anyway, the TASS Agency account had the effect of encouraging India. And also Neville Maxwell mentioned in the book that in 1962 the Indian Government believed what the Russians told them that we, China, would not retaliate against them. Of course we won’t send our troops outside our borders to fight against other people. We didn’t even try to expel Indian troops from the area south of the McMahon line, which China doesn’t recognize, by force. But if your (e.g. Indian) troops come up north of the McMahon line, and come even further into Chinese territory, how is it possible for us to refrain from retaliating? We sent three open telegrams to Nehru asking him to make a public reply, but he refused.
He was so discourteous; he wouldn’t even do us the courtesy of replying, so we had no choice but to drive him out.
You know all the other events in the book, so I won’t describe them, but India was encouraged by the Soviet Union to attack.
Of course, Mr. President also comes from Camp David, but we have no interest in asking you not to have good relations with the Soviet Union. And we also hope that you will reach agreements with the Soviet Union on disarmament and other matters. We have even expressed the wish that you visit the Soviet Union first.

At that time, in October 1959, the Indians made a military provocation against us at the Natula Pass on the border with India. The Pass is on the top of the plateau. The Indians when they went up to the Pass they had more casualties, and because the Indians suffered more casualties they [the Russians] said it was China which launched the attack against India. And from that time the Indians believed what Khrushchev told them. Afterwards Neville, the British correspondent, made that clear.

Dr. Kissinger: I read that. I must say from my experience of Soviet leaders I don’t think they need our encouragement to be anti-Chinese. (Chou laughs.) It comes naturally.

Prime Minister Chou: But at least at that time it was something, because at that time they wanted to curry favor with you. You know the atmosphere at that time was quite different.

Prime Minister Chou: The situation at that time was different.

Prime Minister Chou: So from this we can see that you have a point when you praise Adenauer. I remember you said in 1957 Adenauer told you the U.S. was going to improve relations with China, but at that time you couldn’t agree.

Dr. Kissinger: I did not believe that the People’s Republic and the Soviet Union would ever split. I was wrong.

Prime Minister Chou: I told what you told me to Chairman Mao, and he immediately recalled it and said that Adenauer had a point there; he had grounds for thinking so. Because it was in 1955 when the Soviet Union established diplomatic relations with West Germany and Khrushchev told Adenauer the Chinese are very fearful people—the Yellow Horde is about to come again.

Dr. Kissinger: That is right. That is why Adenauer believed it.

Prime Minister Chou: The Chairman immediately recalled that. At that time I was Foreign Minister. So Chairman Mao, who remembers very accurately every crucial moment in history…

Prime Minister Chou: But it shows Adenauer had his grounds for saying that in 1957.

Dr. Kissinger: I did not believe that two communist countries could split so completely.

Prime Minister Chou: Because at that time you were still a professor and not a Presidential Adviser. If you did not take part in Presidential affairs it is not easy to understand this.
Posted by Claude Arpi at 3:00 PM