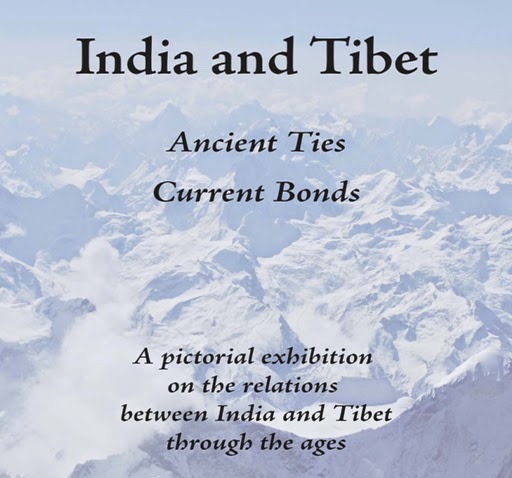 My Exhibition on the relations between India and Tibet entitled "India and Tibet, Ancient Links - Current Bonds" can be visited online on my website.

There are 35 panels depicting this unique relation through the ages.

You can download an image of each panel by clicking here...
The Himalayas as a Bridge
The Buddha Dharma Becomes State Religion
Tibet's Relations with Its Neighbours
The Translation of Buddha's Words Can Start
Tibetan Medicine and Ayurveda
The Second Propagation comes from India
Tsangyang Gyatso, the Sixth Dalai Lama
The Treaties with Ladakh and the Dogras
The Younghusband Military Mission (1904)
A Refugee in Kalimpong
The Simla Conference (1914)
The Transborder Trade
Indian Cultural Missions in Tibet
The Holy Lands of Tibet and India
Tibet Still Independent
Tibet after India's Independence
The Indian Trade Agencies in Tibet
Military Escort and Trade Agent
India has a New Neighbour
A Prophetic Letter (November 7, 1950)
The Indian Prime Minister visits Chumbi Valley
The Dalai Lama and the Panchen Lama visit India (1956)
The Rehabilitation Starts
The Dalai Lama Arrives in India (1959)
The 1962 Sino-Indian Conflict The Tibetan Special Frontier Force
An Autonomous Region of China
The Dalai Lama with Presidents and Prime Ministers
They had Strong Words for Tibet
The Role of the Dalai Lama
The Kashmiri Community in Tibet
India's Gift to Tibet
A Son of India
Our Gratitude for their Support, Advice and Illustrations
Posted by Claude Arpi at 6:15 AM