When India had a Consulate in Lhasa 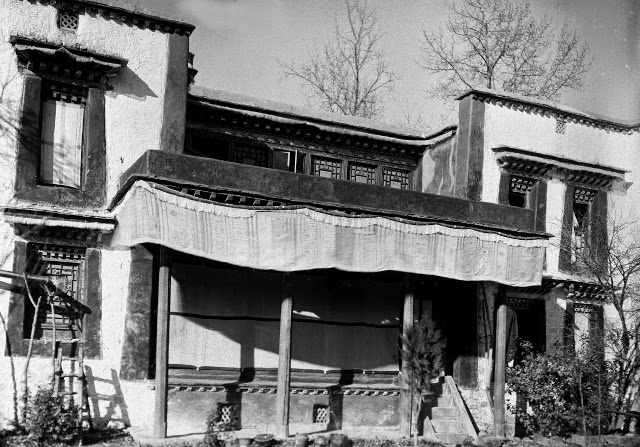 The Nepalese newspaper, The Republica reported that "China has turned down India's proposal to establish its Consulate General Office in Lhasa of Tibet."
The  proposal was made by Sujatha Singh, the Indian Foreign Secretary during the 6th China-India strategic dialogue held in Beijing last week.
Nepal remains the only country to have a Consulate General Office in Lhasa.
According to The Republica, after meeting her Chinese counterpart, Deputy Foreign Minister Liu Zhenmin, Singh told the reporters that "India will now plan a decisive talk with China in this regard."
What does it mean?
India is ready to drop the idea of reopening the Lhasa Consulate?
Let us not forget that India had a full-fledged Mission between 1947 and 1952; in 1952, it was foolishly downgraded by Nehru into a Consulate General(under Chinese pressure).
After the 1962 Sino-Indian War, the Indian Consulate General in Lhasa (and the 3 Trade Agencies in Yatung, Gyantse and the 'seasonal' one in Gartok) were closed.
It appears that the outgoing Indian government is backing out of its earlier demand and would now be satisfied  with another Consulate General in Chengdu (Sichuan) or Kunming (Yunnan province) instead of Lhasa.
This remains to be confirmed.
Today, India has 2 Consulate General Offices in Shanghai and Guangzou.
At the same time, China is extremelly keen to open an Office in Chennai.
In this context, I am posting a letter from P.N. Kaul, the Consul General in Lhasa between 1959 and 1961. It is addressed to his successor Arvind Deo, who is to take over soon.
Note that in 1961 already, the Chinese were putting pressure on India to reduce the activities of the Consulate, particularly the trade.

I was informed by the Ministry a month ago of your posting here as my replacement. I expected a communication from you for seeking clarifications on any minute details, but did not hear from you – obviously because you are on leave. Yesterday’s [diplomatic] bag (incidentally Bag comes here on every 4th, 14th and 24th of the month from Gangtok) brought in a few notifications regarding you from which I learnt your leave address.

2- You must personally have gone through the latest Note on Living Conditions in Lhasa; I enclose a copy to be on the safe side. The Note deals with most aspects. There are a few things, however, which you personally may be interested to be informed about:

a-    The work here is very little indeed since March, 1959. Social life outside our Consulate General is nil; there being the Chinese Foreign Bureau and the Royal Nepalese Consulate General with whom you have only occasional formal social contacts. The new Royal Nepalese Consul General, Yak Thumba, arrived a week back and has been ill ever since – he is, however, recovering fast.
b-    We have clerical staff of one Sikkimese Head Clerk (Local rank of Vice Consul) [Gyatso Tshering?], two “Sikkim-based” clerks, one Kalimpong boy as Tibetan Translator-cum-Librarian, one “Sikkim-based” Wireless Operator, One Cypher Assailant from Delhi and another assistant from Delhi just posted in replacement who functions as Confidential Assistant-cum PA; he also knows some Chinese having been student in Peking for three years on a scholarship. Besides there we have one Assistant Civil Surgeon I as our Medical Officer. All the above staff until recently had their families with them but the new Vice Consul and the newly posted assistant from Delhi are without their families here at present. My only worthwhile recreation has been sporting in a mediocre game of tennis with my staff in the evening.
There is no Indian Community in Lhasa.
c-    The staff and the local Class IV servants are not overworked. Until recently I had an Indian personal bearer-cum-cook with me but I was compelled to send back as he created problems! I have since been able to easily to cope with one Gurkha Class IV as my cook on payments during off hours, there being hardly much entertainment to outsiders. He is a reasonably fair cook but has no knowledge of cooking of South and West Indian dishes. One of the Class IV, since I sent away my own servant, has been doing my bearer in spare time on payment. A personal bearer or a bearer-cum-cook would however, be useful but the snag is that they remain idle most of the time.
In the balance it would be worthwhile having one Indian servant with you. Please treat this as purely personal informal advice.
d-    You do not need to bring any furniture or crockery with you. Rice (inferior), Atta, Dalda, sugar, etc., it is advisable to purchase and dispatch from Gangtok itself and the shopkeepers do all the needful. It is advisable to avail of your entitled maundage [?] to save on transportation charges later on. Fine rice, papars, pickles and the like should be brought with you from India. Electricity is available here since two years and pressure cookers, heaters, firewood stoves, (bukkaries) are available in the Consulate; you need to bring one electric iron for your use.
There is a radiogram and a radio in your residence; there only two dozen long playing records though, you can order more later on. The living quarters are tolerable enough for Lhasa. Needs of clothing, etc. have been fully explained in the Note on Living Conditions.
There is a Toshakhana [literarily treasure-house, in this case for food and liquor] grant of about Rs. 4000- per annum for entertainment. Stocks of liquor, cigarettes, sausages, cheese and the like are adequate in the Toshakhana. I have been purchasing my par needs from it, though it has been objected to by the A.G.C.R. [Auditor General & Central Audit] You can order for yourself from Calcutta drinks, imported tinned items like milk, Kraft cheese, sausages and bacon duty free from Calcutta. There will be hardly be any vegetables during winter and you are coming towards the beginning of winter season. I have however, got some tomatoes dried for you, besides you will be able to get fresh cabbage and turnip preserved in hot house and the universal potato.
There is one Consulate Willys Station Wagon [Jeep] mainly for your use, the second one is on its last leg and its replacement should materialize through D.G.S.D. [Directorate General of Supplies & Disposals] in three to four months time. If you have time in Delhi you may see Mr. Shrinivasan, Under Secretary (TG) and expedite its mataerializing.
a-    No foreign exchange problems are involved here. You get your pay in rupees; market exchange rupee-yuan is favourable to us. Rupees remittance facilities through Bank Drafts issue by the Office exists.
Our mail takes 10 to 15 days to reach here. Telegrams at India rates can be sent over the Chinese P&T channels.
b-    Most of our things of necessity are not available locally. On an average one truck on hire for our stores and rations materialize from Yatung to Lhasa monthly. One has to furnish requirement indent to Chinese one month in advance.
c-    The Consulate care will fetch you and your essential baggage from Yatung. A truck will be indented for to bring your heavy baggage and any stores lying at Yatung. Your baggage should be made into 35 seers leads as it has to travel from Gangtok to Yatung by ponies/porters. An odd heavier essential package is, however, managed by porters at higher rates.

In case you have any further clarifications to seek please send a signal over tour Delhi-Lhasa Wireless link, or a telegram if advisable.

Please do let us know you exact date of arrival in Gangtok and Yatung. I suggest you spend four days at Gangtok, although I am quite anxious to leave soon.

You may consult Mr. A.K. Sen and Director S. [Sumal] Sinha for further details as both were Ex-C.G. in Lhasa

With my very best wishes and Regards