Sixty years ago, on April 29, 1954, the (in)famous Panchsheel Agreement was signed in Beijing.
On the occasion, I post an article I had written 10 years ago for Rediff.com.
It is probably a coincidence, but India and China have today scheduled a crucial meeting of the border management group.
The objective is to  reinforce patrolling protocols on the Line of Actual Control (LAC).
The Times of India reported: "An Indian team from foreign and defence ministries will be in Beijing to hold the sixth meeting of the working mechanism on border affairs. Although the previous meeting was held just a couple of months ago in February, Indian government wanted another meeting. The Chinese team will be led by Ouyang Yujing, director general, Department of Boundary and Oceanic Affairs, while the Indian team will be led by Gautam Bambawale."
The reporter adds: "With the advent of summer, and the opening of Himalayan passes, both Indian and Chinese sides are getting ready to intensify patrols on the LAC. With India is in the middle of general elections, the current government does not want to take any chances with potential misadventures on the LAC. Any untoward incident could have potentially destabilizing effect on domestic politics in India."
A few days ago, the Indian Director General of Military Operations met with China's deputy army chief, Lt Gen Qi Jianguo and discussed the "maintenance of peace and tranquility" along the LAC and enhance bilateral military engagements.
Peaceful Coexistence again?

By the way, do you know where President Xi Jinping is these days?
On April 27 and 28, he visited the paramilitary commandos in Kashgar and the troops of the Xinjiang Military Region, facing India in Ladakh.
Xi was accompanied by 5 other members of the Politburo, Yu Zhengsheng, member of the Standing Committee of the Politburo and Chairman of the Small Group on Xinjiang (Central Working Coordination Small Group on Xinjiang), General Fan Changlong, senior vice-chairman of the Central Military Commission and of course, Zhang Chunxian, Party Secretary in Xinjiang Uyghur Autonomous Region; Li Zangshu, Director of the General Office of the CPC Central Committee and Wang Huning, Xi Jinping's close confident and speech-writer.
While in Kashgar, Xi told the soldiers: "I hope that you care about each other, help each other, learn from each other, safeguard national unity and defend the motherland frontier."
He also told the commandos (SWAT): "The more you sweat in peacetime, the less you bleed in wartime."
In other words, practice and be ready to deal with 'terrorists'.
On April 28, Xi Jinping visited the Kashi [Kashgar] City's Public Security Bureau (police station). He inspected video surveillance cameras, equipment for anti-terrorism riot drills, etc.
The Party General Secretary said: "I am very concerned about your equipment and training to deal with violent terrorist criminals. You must have the effective means. You must train in real combat environment."
It was indeed an important visit!


My Rediff article on Panchsheel published on April 29, 2004

Today, India and China 'celebrate' the 50th anniversary of  the 'Agreement on Trade and Intercourse between the Tibet region of China and India,' better known as the 'Panchsheel Agreement.'
Is there something to celebrate? While this can certainly be questioned, nobody can dispute that the events of 1954 marked an epoch for India and Tibet.
The time has perhaps come to look into the history of these troubled years and introspect to see if new opportunities can be found to sort out the old knots of the past.
The ball started rolling a hundred years ago (in July 1904) when a young British colonel, Francis Younghusband, forced his way into the holy city of Lhasa. Today it is fashionable to speak of the 'clash of civilisations' but in this particular case, it was truly two different worlds meeting for the first time.
At the end of his stay in the Tibetan capital, Younghusband forced upon the Tibetans their first agreement with the mighty British empire. By signing this treaty with the crown representative, Tibet was 'acknowledged' by London as a separate nation. However political deals are never simple; Tibet's Western neighbour, China, whose suzerainty over Tibet in Lord Curzon's words was a 'constitutional fiction', was extremely unhappy not to be a party to the accord.
Ten years later (March 1914), wanting to show fairness, London called for a tripartite conference in Simla to settle the issue: the three main protagonists sat together at a negotiation table for the first time. The result was not fully satisfactory as the Chinese only initialized the main document and did not ratify it. The British and Tibetans however agreed on a common border demarcated on a map: the famous McMahon Line was born.
This treaty was still in force when India became independent in August 1947.
But in October 1950, an event changed the destiny of the Himalayan region: Mao's troops marched into Tibet.
Lhasa appealed to the United Nations against China's invasion of Tibet. India, though recognising Tibet's autonomy ('verging on independence' as per Nehru's words), began to vacillate and was unable to stand up in favour of their peaceful neighbour against the might of Red China.
In May 1951, some of the Dalai Lama's representatives signed --  'under duress' --  a 17-Point Agreement with Communist China. For the first time in its 2,000-year history, Lhasa officially 'accepted' Tibet as a part of China. However, the incorporation of the Tibetan nation into China was not immediately acknowledged by Delhi which continued for a couple of years to maintain a full-fledged mission in Lhasa. 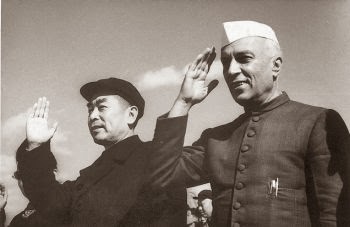 The signature of the Panchsheel Agreement between India and China on April 29, 1954 marked the tail-end of events set in motion by the entry of Younghusband into Tibet. While the British expedition accepted Tibet as a separate entity, the signatures on the Agreement put an end to its existence as a distinct nation. The Land of Snows merely became 'Tibet's Region of China.' The circle was closed with incalculable consequences for India and the entire Himalayan region. One of the most ironic aspects is that the Tibetans themselves were not even informed of the negotiations.
The preamble of the Agreement contains the Five Principles which formed the main pillar of India's foreign policy for the next five years. They heralded the beginning of the Hindi-Chini Bhai-Bhai policy and the 'non-aligned' position of India.
A great tragedy is that the Agreement is remembered not for its content, which concerns the trade relations between India and Tibet, but for its preamble which directly caused the destruction of an ancient, spiritual 'way of life' (backward in one sense though much more advanced at an inner level).
Another misfortune is that the idealistic Five Principles have never been followed either in letter or in spirit by China. Non-interference in the other's affairs and respect for the neighbour's territorial integrity are two of the Five Principles, but Chinese intrusions into Indian territory began hardly 3 months after the signature of the accord.
The Agreement opened the door to China's military control of the Roof of the World by the People's Liberation Army. This translated into building a network of roads and airstrips heading towards the Indian frontiers in NEFA and Ladakh.
Nehru and his advisors had progressively fallen in love with a 'revolutionary' China and sacrificed Tibet for the sake of the new-found brotherhood. India did not obtain any benefit out of her 'generosity.' On the contrary, she lost a peaceful and friendly neighbour.
Eight years later, the Principles had evaporated so much that the two Asian giants fought a war in the Himalayas.
The Panchsheel Agreement is composed of two parts: the Preamble (the Five Principles) and the content (regarding trade between India and Tibet and pilgrimage rights for Indians and Tibetans). However it was the title itself, 'Agreement on Trade and Intercourse between the Tibet region of China and India' which was the most important victory for Beijing. For the first time since Younghusband had entered Lhasa, India acknowledged Tibet as only a 'Region of China.'
India had to pay dearly, and is still paying 50 years after an agreement (which in any case lapsed in June 1962) for the idealist policy of her first prime minister.
Nehru wanted to be a modern Asoka, renouncing violence and force to solve the problems of the world. In his admiration for the noble emperor, he did not remember that the Mauryan empire did not survive the Asokan edicts. The greatest empire of ancient India crumbled less than 70 years after Asoka's death.
It is perhaps unfortunate, but still a fact of life that strength and power are necessary to defend some eternal values. Sardar Patel knew this, but he passed away in 1950. Had he been alive, no Panchsheel Agreement, finishing off the Tibetan nation, would have ever been signed.
Today, fifty years after the signing of the Pancheel Agreement, one can only hope that a new generation of Indian leaders will be able to live by the Principles as enunciated in the agreement, but will also have a more insightful vision to take firm actions to make India truly strong and self-reliant.
The agreement had many tragic consequences. We recently wrote about the proposed damming and diversion of the Brahmaputra which can only happen because the people of Tibet have no say in what is happening in their country. Though neither the Preamble (the Five Principles) nor the provisions of the agreement are in force today, the acceptance of Tibet as a part of the People's Republic of China remains a fact.
Another disastrous outcome of the signing of the agreement is the refusal of some of Nehru's advisors to bargain for a proper delimitation of the border between Tibet and India, against the relinquishment of India's rights in Tibet (accrued from the Simla Convention). These officials considered these advantages an imperialist heritage to be spurned by a newly independent India.
During the talks with Beijing between 1951 and 1954, K M Panikkar, the Indian ambassador to China and his colleagues 'cleverly' tried to avoid bringing the border question to the table. Their reasoning was that if the Chinese did not consider the border to be an agreed issue, they would themselves bring it up for discussion. The Indian cleverness backfired, ending in a disaster for India. In his speech after the signature of the agreement, Zhou Enlai congratulated the negotiators for having solved all the matters 'ripe for settlement.'
Fifty years later, the folly of this policy still haunts an India unable to sort out her border tangle. In June 2003, Prime Minister Vajpayee expressed the wish to start 'fast track' parleys on the issue with Beijing.
Does it mean that today the border tangle is 'ripe for settlement'?
Will the 50th anniversary of Panchsheel finally witness a breakthrough?
We shall have a look at the different options in the second part of this article.
Posted by Claude Arpi at 5:50 AM