The Tiananmen Square massacre: a rehearsal in Tibet 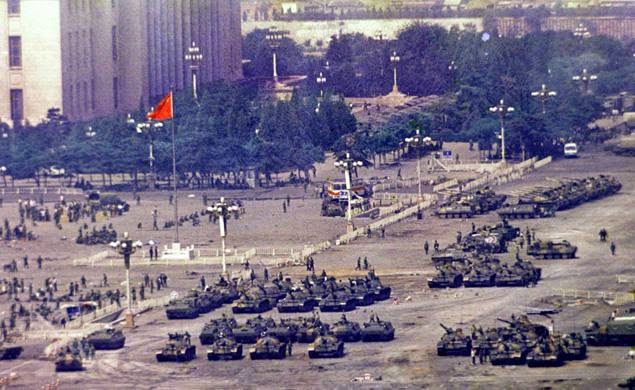 There was a rehearsal for the Tiananmen incident which saw the Army taking over the Square and killing hundreds of students.
It happened in Lhasa, Tibet three months before the Square's crackdown; a young Party Secretary then demonstrated to the Elders in Beijing that he had the capacity to handle the most difficult situations.
He was suitably rewarded; a few years later, he became General Secretary of the Party and President of the People's Republic of China.
I am reposting here an article written in 2002 for Rediff.com.
As you can see, it pays to be tough in China.
At the Tiananmen's incident, I like the remarks made yesterday by Bill Bishop in his Newsletter Sinocism. He wrote:


I first came to China 25 years, to spend the second semester of my junior year at Peking University. We arrived in late January and I stayed until the third week of June. No one who was in Beijing then will ever forget the Beijing Spring and subsequent crackdown.
The one lesson I took away from those first few months in China is that it is always a mistake to underestimate what the Party will do to stay in power.
That lesson, which has held up very well over the last quarter century, is why I continue to believe that Xi Jinping is very serious about both economic reforms and reining in corruption. There is no shortage of people, inside and outside China, who believe Xi's efforts will fail without said political reform, but Xi and his colleagues appear to disagree. Political reforms in any Western or liberal sense seem even less likely now than they have in decades.

China is not going to change soon and China will remain aggressive.
Te problem is that Beijing still believes that all its problems are due to her 'bad' and 'provocative' neighbours.
On May 30, The People’s Daily reported that Fu Ying, the Chairperson of the National People’s Congress Foreign Affairs Committee, suggested during a TV show that "all issues in the seas around China were caused by the provocative behavior demonstrated by China’s neighboring countries".
She, of course, mentioned that Japan which 'faces the question of whether it will continue on the path of being a peaceful nation or not".
After saying that China will not give up on peaceful resolutions, Fu added that "however, strong responses are necessary when facing challenges. This position is also needed to maintain the peaceful and stable order in the entire region".
India too will have to cope with these strong 'peaceful' responses from Beijing.

From Roof of the World to Top of the Party
Claude Arpi
Rediff.com
December 10, 2002