Why is Deng watching the Seagulls? 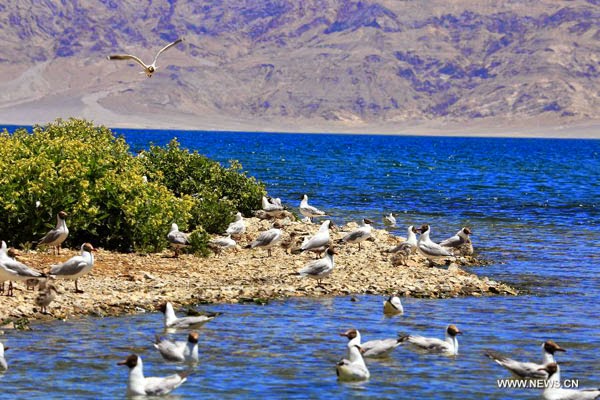 A few days ago, International Campaign for Tibet, reported that last month, Deng Xiaogang, Deputy Party Secretary of the TAR visited Purang County in Ngari Prefecture to inspect the border security and the People’s Liberation Army bases. Purang is located near Mt. Kailash and not far from Dram, the border town with Nepal.
The ICT deducted: "Deng’s visit was likely to be intended to send a signal of vigilance by the Party authorities in the buildup to the Kalachakra in Ladakh. Deng, who is also secretary of the Party Committee on Politics and Law in the TAR, was cited by the state media as saying that border security checkpoints are key to maintaining social stability in the Tibet Autonomous Region."
ICT further added: "Woeser, a noted Tibetan writer who lives in Beijing, cited a Chinese traveller who had been told by a travel agency that Tibetans were no longer able to obtain permission to travel in border areas of Tibet such as Purang where Mount Kailash is located."
It is rather surprising, considering the promotion (not to say propaganda) made by Beijing a few months ago about the Mt. Kailash.
The China Daily wrote: "The year 2014 marks the beginning of the Year of the Horse in China and the 'Year of the Wooden Horse' in the lunar calendar of Tibetan people. The Year of the Horse is also the 'recurrent birth year' of Gang [Kang] Rinpoche (or Mount Kailash), a holy mountain in west Tibet. Since circling Gang Rinpoche in the Year of the Horse is a scared tradition among Tibetan Buddhists, this year has seen an endless stream of people flocking to the region to perform pilgrimage,"
The Chinese newspaper added: "The Tibetan people's freedom of worship has been respected and protected in the Tibet autonomous region and other areas inhabited by Tibetan people since the region's peaceful liberation, especially since the adoption of reform and opening-up. ...Monks and nuns from different Buddhist sects now enjoy a full freedom to preach and conduct religious activities. Believers are also free to visit monasteries and holy mountains to worship and perform religious rituals. They can circle the holy mountains, recite Buddhist scripture and spread Buddhist teachings, and take part in all kinds of religious activities."
What has happened between the Tibetan New Year in February and today?
Just the Kalachakra? The arrival of the Modi government in Delhi?
What is more surprising is that the powerful Deng Xiaoping still roams around
the Ngari region.
Remember Wu Yingjie, another Deputy Party Secretary of the TAR who camped for weeks in Nagchu last year.
This exercise was part of the 'massline' campaign initiated by Xi Jinping, the Party's General Secretary.
Is Deng going to replay the Wu episode?

On June 20, an article in The Tibet Daily mentions: "Deng Xiaogang comforts the rank and file of the police in border County".
It reports that "the Deputy Chairman of the Tibetan Autonomous Region, the Party Secretary of the Politics and Law Committee, Deng Xiaogang inspected [Rutok], the border county in Ngari [Prefecture] and conveyed to the rank and file of the border policemen, [the Party’s] cordial greetings.
The article explains that troops stationed on the border, in this county, live at the highest elevation of the country [read China].
The Tibet Daily continues:

Deng Xiaogang traveled to inspect and provide guidance to the [Rudok] county. He cordially shook hands with the soldiers and comforted them.
Deng Xiaogang pointed out that since long time, the party and the people have a great trust in those who are stationed at borders, facing cold and lacking of oxygen; facing harsh environmental conditions, while always sticking to their positions, fulfilling conscientiously their duties, carrying forward the sacrifice, without fear of fatigue, fighting tenaciously and continuously to overcome the difficulties and challenges, in order to defend the national sovereignty and the territorial integrity and maintain the stability of the southwest border of the motherland, to maintain harmony, peace, economic development and stability for the region, promote national unity, border stability while improving people's livelihood, promoting religious harmony.

Further, Deng Xiaogang stressed that: "Tibet is very special strategic location, is an important barrier for the national security, development and stability in the border areas is an important part of the region's overall situation. In recent years, under the strong leadership of the CPC Central Committee, the regional party committee, the government is firmly asking the people to unite and lead the development of the region, go all out to maintain stability, and improve people's livelihood as much as possible, to build prosperity, harmony, happiness, rule of law, a beautiful new socialist Tibet and work hard."
He further hoped that the officers serving on the border keep this strategic and overall perspective in view and fully realize the extreme importance of doing the [Party's] work on the border, increasing the sense of responsibility and sense of mission and urgency, establishing a long-term battle plan, [and that they] are determined for a continuous fighting, conscientiously implement the General Secretary Xi Jinping series of important speech, etc. etc. etc.
Apparently Deng Xiaogang was very satisfied: he ordered the policemen [border guards]: "...according to the law to crack down on all criminal activities that endanger national security and social stability, and never let separatism and terrorism and other violent criminals undermine the excellent situation of stability and unity in our region.
He was accompanied by a high level delegation.
Apart from th Communist usual jargon, the question remains why should a senior, powerful leader like Deng spend weeks in such a remote places.
Just to watch the seagulls fly over the Panggong lake or to circumbulate the Kailash?
There is another possibility, Deng may be nervous about possible infiltrations of Uyghur militants through the Aksai Chin road which enters Tibet in Rutok.
That would be a more serious issue for China!
Posted by Claude Arpi at 7:12 AM