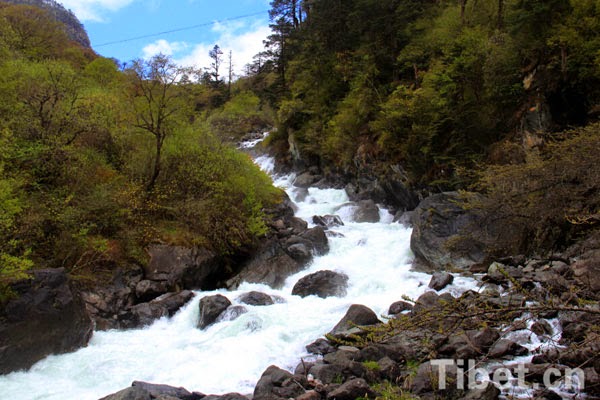 China Tibet Online recently promoted the region of Tsari in Southern Tibet.
It thus praised the area: "Dzari (Tsari) Township, 2,800 meters above the sea level, is located in Luntse County of Lhoka Prefecture, southwest China’s Tibet Autonomous Region. Dzari means the holy mountain in Tibetan language. Hailed as the Tibet’s Shambhala, Dzari Township boasts its lush vegetation, moderate weather, still lake, running brook, vast forest, holy mountains as well as a satisfactory variety of herbs."
But Tsari has been more than just this.
It was once one of the most sacred pilgrimages in Tibet.
One of the characteristics of this pilgrimage was that it was running across the Indo-Tibet border (the McMahon Line). Half was in Tibet, half was in NEFA (India).
I always thought that it would be a great Confidence Building Measure, if India and China could agree to jointly organize the pilgrimage again one day.
But reading the reports of Deng Xiaogang's tour in Western Tibet, it is clear that China is too nervous to envisage such a bold step today.
I post here extracts of my book, 1962: The McMahon Line Saga on the Tsari pilgrimage.

The Pure Crystal Mountain Pilgrimage of Tsari
Tsari has always been synonymous of ‘sacred place’ in the Tibetan psyche. With the Mount Kailash and the Amye Machen in eastern Tibet, the pilgrimage around the Dakpa Sheri, the Pure Crystal Mountain has, since centuries, been one of the holiest of the Roof of the World.
The ‘Pure Crystal Mountain’ lies at 5,735 meter above the sea in the Tsari district of southeastern Tibet. As already mentioned, Toni Huber  is one of the foremost scholars who wrote a great deal about this region from which the Subansiri  and the Tsari Chu flow: “The area of the two rivers into which Tsarong  ventured for military and commercial reasons had for centuries defined a very significant territory for both Tibetans and neighbouring non-Tibetans ”. Huber describes thus the region:


[these] rivers encompassed the southern slopes of the famous Tibetan holy mountain of Dakpa Shelri at Tsari. The large-scale, 12-yearly circumambulation of Tibetan Buddhist pilgrims around the mountain known as the Rongkor Chenmo, had the character of a state ritual for the Ganden Phodrang [Tibetan Government]. Pilgrims in this huge procession crossed the McMahon Line below the frontier village of Migyitün in Tsari district and followed the Tsari Chu southwards. They then turned back up the Subansiri westwards, crossing the McMahon Line once again to reach the first Tibetan frontier settlements in Chame district. In doing so, they traversed non-Tibetan lands during this entire southern leg of the procession. This was the territory of the Mra (Tibetan: Morang Loba) clan, which ran downstream along the Tsari Chu valley and around its junction with the Subansiri at Geling Sinyik, and also of the neighbouring Na (Tibetan: Khalo, Lungtu Lopa) community of Taksing, which extended upstream along the Subansiri heading westwards towards Tibet.

An elaborate system of ‘compensations’ or ‘taxes’ depending from which side one made the pilgrimage was put in place:


Payments in kind were regularly made to both the Mra and Na by the Ganden Phodrang in recognition of the periodic passage of tens of thousands of pilgrims via their territories, and also so that their assistance could be gained in helping the procession proceed smoothly. The Lodzong, a ritualized tribute payment of various Tibetan goods, was made immediately prior to each Rongkor Chenmo. Shares of the Lodzong were given to the Na and Mra, but also to members of other clan-based groups collectively called Tinglo or Tingba by Tibetans. These latter groups lived lower down the Subansiri River and in the upper Kamla River area, and they regularly threatened to disrupt the pilgrimage unless they received a customary amount of Tibetan goods.

Our interest in the long pilgrimage, the Rongkor Chenmo, is mainly because its route crosses over to India, south of the McMahon Line.
As described by Huber the sacred journey involved crossing south to the McMahon Line towards the junction of the Subansiri-Tsari, and a return back north across the line. Already in the early 20th century , tens of thousands of pilgrims are said to have performed the Rongkor.

The junction of the Chayul-Chu with the Subansiri-Tsari is about twenty miles south of the McMahon Line as the crow flies.
Bailey and Morshead visited the place in 1913 during their journey in Southern Tibet. Bailey recalls:


As far as I could gather from the minor official who called on us, [Chikchar] was a pilgrim economy, being the main centre for the circuit of the holy mountain. The great pilgrimage took place every twelve years, in the Monkey Year. 100,000 pilgrims  usually made the pilgrimage, many of them coming from Pome. The Pobas [Tibetans] sent a hundred soldiers; fifty were sent from Trasum in Kongbo and thirty from the frontier village of Tron on the Chayul river. These were to protect the pilgrims from attack by the Lopa tribe of Daflas, through whose territory the pilgrims had to travel when making the Great Pilgrimage.


The pilgrims went down the Tsari river, past Migyitün which apparently was recognised as the frontier of Tibet-to where the Tsari river joined the combined waters of the Char, Nye and Chayul.

It is interesting to note that in the early 20th century, Migyitün was already considered to be the border with Tibet. The McMahon Line, drawn a few months later (under the supervision of Capt. Bailey), only acknowledged this fact. Bailey further explains:


This was five or six days' journey. Then they turned up the combined rivers, towards Sanga Choling, which they reached about a fortnight later. Some pilgrims went very much slower, the minor official said; and I inferred there was merit in delay. The slower, the better.
I asked how the pilgrims managed on the route, especially when they were going through Lopa country. Apparently all along the route were places called Tsukangs where one man lived and supplied the pilgrims with fuel and hot water, but not with food. Food the pilgrims had to carry with them, but at Migyitün and elsewhere people came to sell food to the pilgrims at extortionate prices.

Similar descriptions were made by other travellers. Here again, there is a clear distinction between the Tibetans and the Lopas. As Bailey put it:
The Lopas were not allowed to travel up the Tsari valley beyond the frontier village of Migyitün because the Tibetans feared they would damage their shrines. They were induced to give the pilgrims unmolested passage through their own country by the Tibetan government lavishing on them presents of woolen cloth, tsampa and swords.
Capt Bailey then describes the other pilgrimage, the Kingkor.


There was also a Small Pilgrimage  which was performed annually between the 19th day of the third month and the 15th of the eighth. After that date it was closed, because it was a sin in making the pilgrimage to take any life and the path was infested with small maggots about as long as a short match, which lay so thick upon the ground that it was impossible to step between them.

Interestingly, though the old Tibetan society was relatively free and women played an important role in the socio-economic life of the nation; in this particular case, women were not allowed to perform the Small Pilgrimage. Bailey explains why:


…as the route crossed the Drolma [Dolma] pass, which was taboo for women. Some of them however would go as far as the pass and then return, acquiring thereby what little merit the taboo allowed them. On the 15th of the eighth month all women were sent away from Chikchar and went to live at Yarap, though I could not discover for what reason.
We visited the temples. The largest was Pagmo Lhakang, down in the valley. It had a golden roof, and the principal image, that of Dorje Pagmo , was studded with precious stones. A golden butter lamp was set before it. On the hillside was a monastery with twelve monks who wore their hair long and matted behind. Here the central image was that of the Tashi Lama; and in another temple the central image was one of Drukpa Rimpoche, the incarnation of Sangling.

Bailey notes that Chikchar did not pay direct taxes, except a little butter, the provision of food and ula to officials: “They made their living by begging, ranging far and wide in the off-season for pilgrims. The headman had travelled as far as Pome  soliciting alms.”
Bailey scouted the area with Morshead. His findings would be used a few months later by Sir Henry McMahon during the Simla Conference. Bailey describes the area thus:


I asked where the Tsari river flowed after it joined the combined waters of the Char, Nye and Chayul. The official said that it did not flow into Pemako, but turned south to India; which fitted in with our hypothesis that it formed part of the headwaters of the Subansiri.

They had heard from the Lopas of some military expedition, which they assumed had been Chinese, since the Lopas described the sepoys working the bolts of their rifles in the same way as the Chinese.
The Chinese presence in the early 1910’s sounded the alarm in Delhi and London. Something had to be done to stop the possibility of a Chinese advance in the region.

Here are some of the photos  published by China Tibet Online: 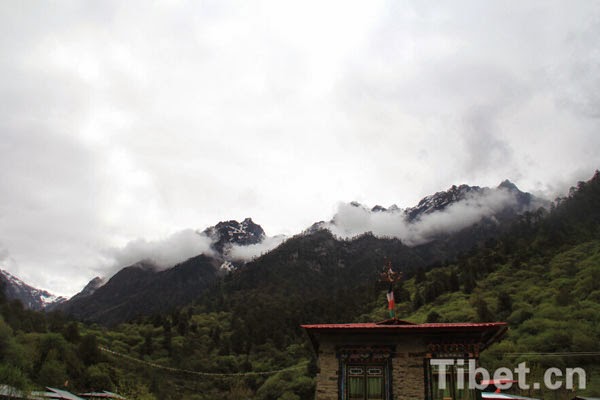 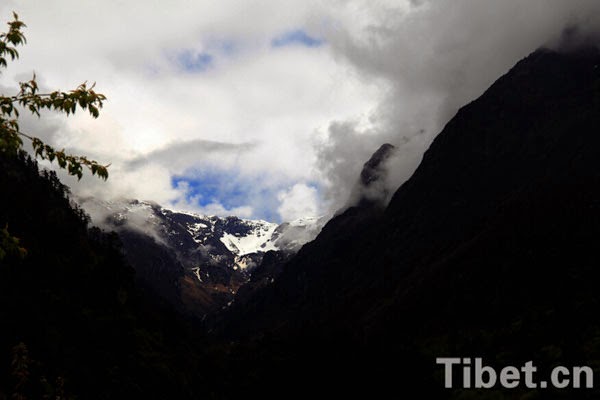 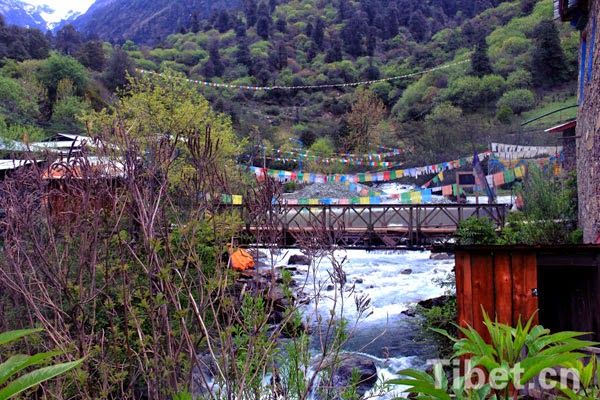 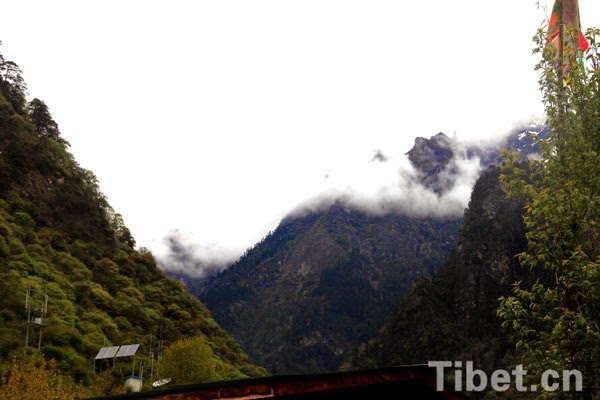 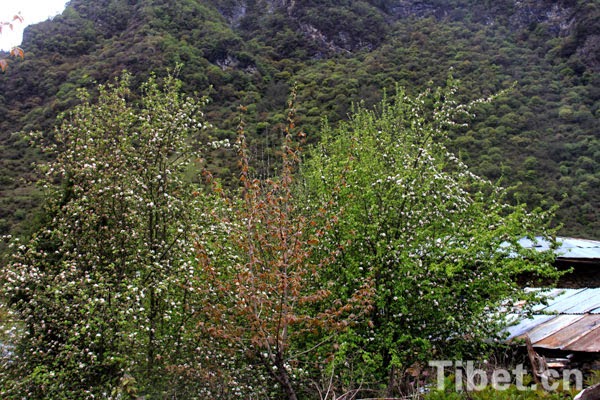 Thank you sir for this beautiful blog.I am from Tawang,a small town of Arunachal Pradesh state of Northeast India.I was told about this great pilgrimage by my mother.Earlier during my grand parents period this pilgrimage was one of the most sacred.But later when Chinese captured Tibet everything is lost,and this pilgrimage is just on stories.I hope one day i can visit this beautiful place.