Kiren Rijiju: 'We must strengthen our position on China border' 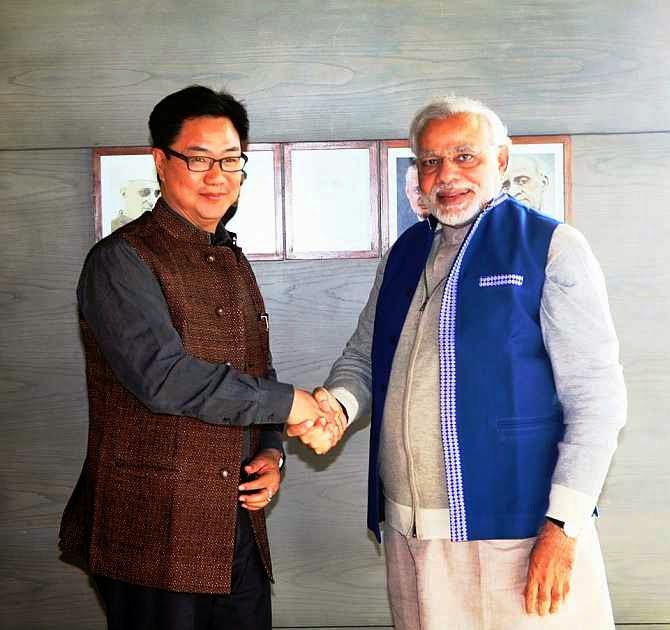 My interview (with Sheela Bhatt) of Kiren Rijiju, Minister of State for Home Affairs.

Kiren Rijiju: 'We must strengthen our position on China border'
June 17, 2014

Sheela Bhatt and Claude Arpi in New Delhi
‘We’re not pursuing an expansionist foreign policy; we’re not going to have an aggressive policy. But that does stop us from developing our own area; by not developing or strengthening our area along the Indo-China border, we are indirectly conceding these areas to the other side (China).’

‘Every country has a policy of settling populations in their border areas to secure the border. In India, the previous government followed the reverse policy, telling people not to go to the border areas.’

‘We have a huge task at hand. It is not easy to ensure connectivity in the border areas because for the last 68 years we have not done enough. That is why it is going to take time. But we must begin now.’

Minister of State for Home Kiren Rijiju speaks of his plans in this first of a two-part exclusive interview to Sheela Bhatt and Claude Arpi.

In 2008, Rediff.com spoke to Kiren Rijiju, then a member of the ‘young brigade’ in the 14th Lok Sabha. At 38, he was considered one of the most outspoken parliamentarians of his generation. He is not only young but articulate, educated and a leader with clarity of thoughts as well.
Today, Rijiju has assumed new responsibilities. He has been appointed as minister of state in the ministry of home affairs to assist Rajnath Singh. More than ever, Rijiju is the ‘face of the north-east’ in Parliament and Narendra Modi’s Cabinet.
Rijiju spoke to Rediff.com’s Sheela Bhatt and Claude Arpi about his new responsibilities, the importance of having someone from the north-east in the home ministry, about the situation on India’s borders, the policies of the Modi government for the Himalayan belt and the meaning of Modi’s election as the new prime minister.