The Panchen Lama in Tibet 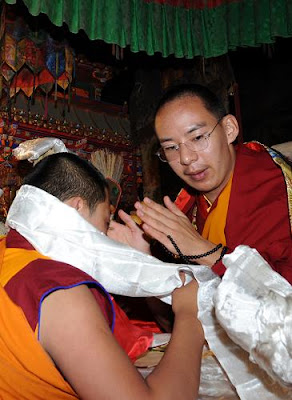 The fact that the Chinese Government decided to 'impose' their Panchen Lama on the Tibetans of Labrang Tashikyil (in today's Gansu province) shows how desperate Beijing is to 'legitimize' their own candidate (by force if necessary) .
Their mind is of course on the succession of the Dalai Lama.
But is it a really a solution?
The Communist regime are creating more and more resentment, not only by imposing with their 'incarnation' of the Panchen Lama, but also by suppressing the aspirations of the people, whether it is in  Tibetan Autonomous Region, or in the Tibetan-inhabited areas or elsewhere in China.
In the meantime Voice of America affirms that "foreigners have been barred from a county in northwestern China and security has been stepped up ahead of an expected visit by a government-appointed Tibetan religious leader".
Nobody should see what is happening?
Once again one understands that Vice President Xi Jinping was not ready to take a risk and have the Panchen Gyaltsen Norbu around, when he visited Tibet last month.

China’s Chosen Lama Visits Monastery Town
By ANDREW JACOBS
New York Times
August 11, 2011
BEIJING — A Chinese-designated Buddhist lama who Communist Party officials hope will become a spiritual and political leader for China’s five million Tibetans arrived in a monastery town in the northwestern province of Gansu on Thursday accompanied by a formidable police presence, and a skeptical crowd was forced to greet him with prayer flags and smiles, residents and exile groups said by telephone.
They said the lama, Gyaltsen Norbu, 21, the Chinese government’s handpicked 11th Panchen Lama, had journeyed to the town of Xiahe because it is home to the Labrang Monastery, one of the most cherished centers of Tibetan Buddhism outside the Tibetan Autonomous Region. Senior religious figures at the monastery have said he may spend weeks studying and mediating there, although that partly depends on how he is received.
The monastery houses more than 1,000 monks, most loyal to another young man designated by the exiled Dalai Lama as the reincarnation of the 10th Panchen Lama, who died in 1989. That boy, Gedhun Choekyi, then 5, disappeared just days after his selection was announced in 1995. Six months later, Chinese officials anointed Gyaltsen Norbu as the new Panchen Lama, or “great scholar,” traditionally one of the most important figures in the Gelugpa branch of Tibetan Buddhism, also known as the Yellow Hat school. The Dalai Lama is the head of that branch, which dominates religious life in Tibetan parts of China.
China’s quest to channel religious loyalty is part of its efforts to counter separatist sentiments in Tibet, which Mao’s forces incorporated in 1951. The Tibetan government was forced out in 1959. China has encouraged migration into the territory by huge numbers of the Han, the country’s dominant ethnic group. It considers the current Dalai Lama a “splittist,” though in decades of political leadership in exile, he advocated autonomy rather than independence.
The Chinese Panchen Lama, as many Tibetans call Gyaltsen Norbu, has spent most of his childhood and adolescence in Beijing but officials, mindful of the legitimacy gap, have increasingly sought to raise his profile among monks and ordinary Tibetans. Experts say the decision to send him to Labrang is aimed at cultivating the respect of fellow monks, although given the ferocity of previous antigovernment protests in Xiahe, the move is not without risks.
“Just forcing him on the faithful cannot win hearts and minds but keeping him in Beijing all the time is also not good for his reputation,” said Arjia Rinpoche, the former abbot of another monastery who fled to the United States in 1998 rather than become Gyaltsen Norbu’s tutor.
Beijing’s 16-year struggle to elevate the standing of their Panchen Lama foreshadows the high-stakes battle that would likely follow the death of the 14th Dalai Lama, who is 76. The Communist Party insists that only it has the authority to choose his reincarnation; the Dalai Lama has hinted he might choose a successor before he dies, a deviation from the tradition that calls on senior lamas to identify his reincarnation.
Exile groups said the Chinese Panchen Lama had been scheduled to come in early July, but his arrival was postponed by skittish officials worried about a hostile reception.
Last week in Xiahe, many of the town’s Han Chinese residents said they were excited by the prospect of his arrival, but several crimson-robed monks complained that his presence might harm Labrang’s reputation. Others fretted about the increased restrictions and security presence that would accompany his arrival.
“We Tibetans don’t want anything to do with him,” one young monk said, pausing on the street to talk to a reporter. “He’s not the real Panchen Lama. Why does Beijing think they have the right to interfere with our traditions?”
In preparation for his arrival, foreign tourists were forced to leave Xiahe in recent days and business owners said hundreds of armed police officers were scattered across the tiny mountain town. One Tibetan scholar who spoke to senior lamas at Labrang said monks and government workers were told to welcome the Panchen Lama at a reception hall. The monks obliged, he said, but they also expressed their displeasure by talking loudly to one another during the ceremony. In the afternoon, the Panchen Lama and his entourage toured a printing house famed for its religious publications.
“If this was the real Panchen Lama, the whole town would have lined up for hours just to see him,” said the scholar, who asked to remain anonymous for fear of repercussions from the government. “In this case, the only people who really wanted to see him were Chinese tourists.”
Adam Century and Edy Yin contributed research.
Posted by Claude Arpi at 2:09 PM