The Change of Guard in Tibet 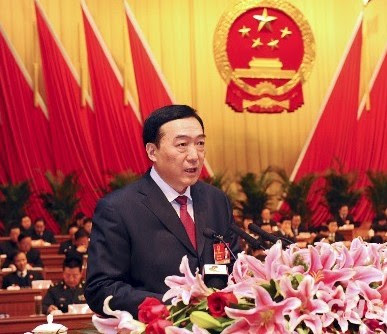 According to his official biography, Chen Quanguo, 55, is a native of Pingyu County in Henan. He was deputy secretary of the CCP Henan Provincial Committee between April 2003 and November 2009, then he was 'elected' governor of Hebei Provincial People’s Government at the 3rd meeting of the 11th Provincial People's Congress on 16 January.
Chen is an alternate member of the 17th CCP Central Committee.
One question comes to my mind: how was he selected to serve for the tough and prestigious post in Tibet (twenty years ago President Hu Jintao also served as Party Secretary in the Tibet Autonomous Region).
One friend suggested 'by Russian roulette', Tibetans may think that 'Mo' (divination) was used (the leadership of the Chinese Communist Party seems to have recently become expert in the Golden Urn lottery!).
His selection was probably more 'scientific', though Chen has apparently never been in contact with 'restive Tibetans' or other minorities before.
In Hebei, Chen replaced the rising star of the Communist Party, Hu Chunhua who was  transferred as Party secretary of Inner Mongolia in January. (Hu Chunhua earlier served in Tibet; he was one of the few Han cadres who could speak Tibetan).
One explanation for Chen's nomination is his contact with Li Keqiang, the future Premier of China. Chen and Li served together for several 5 years in Henan Province. Li has probably suggested Chen's name.
In an essay on the Sixth Generation of leaders (Changing of the Guard: Beijing grooms Sixth-Generation cadres for 2020's), Willy Lam speak of Li Yuanchao, the present Chief of the CCP Organization Department, responsible for the selection of the cadres:


When he was vice-party secretary and party secretary of Jiangsu Province from 2000 to 2007, Li Yuanchao made a name for himself for broadening ‘intra-party democracy’, especially the ‘scientific’ selection of cadres through means including popular assessment and recommendation.
After becoming Director of the CCP Organization Department in October 2007, however, Li has shifted his attention from ‘scientific’ human-resources theories to the time-honored, Confucianist preoccupation with recruiting virtuous cadres. While visiting Heilongjiang Province in late 2008, he told local officials that his first priority was to pick “people who are ambitious, who want to do good things, who are capable and who will not make a big mess [of the political situation].”
On another provincial outing at about the same time, Li said he was looking for cadres who could “uphold economic development, maintain people’s standard of living, preserve [socio-political] stability and ensure the implementation of the zhongyang’s [central authorities] policies.”
Li’s primary concern is that cadres being groomed for fast-track promotion “should pass muster in both de [morality] and competence, with priority given to de.” “Quite a number of cadres have gone astray not due to the question of professional competence but because of lapses in morality,” Li said.

Chen 'morality' is probably good, the point remains that he will have to deal Tibetan (and Han) cadres with 20 or 30 years experience in the region (like Raidi or Phagpala).
How will he managed? It has to be seen.
Jampa Puntsog, presently No 2 in the TAR Party will probably retire soon (in China, it is not like in India where you can remain in politics till you die).
Padma Choling (alias Pema Trinley), the TAR Governor may then be elevated to the no 2 slot.
Interestingly, Padma Choling is service-wise several years 'senior' to Chen.
One good point, Chen did not attack the Dalai Lama in his first speech consecrated to the 'development' of Tibet.


New Party chief of Tibet pledges more efforts in boosting regional development
English.news.cn
2011-08-26
LHASA, Aug. 26 (Xinhua)
Tremendous efforts are needed to boost development in Tibet and the region's long-term stability, said Chen Quanguo, the new secretary of the Communist Party of China (CPC) Committee of the Tibet Autonomous Region, at a meeting here Thursday afternoon.
The CPC Central Committee announced Thursday that Zhang Qingli, the former Party Chief of Tibet, has been replaced by Chen.
At the meeting, Zhang Jinan, vice minister of the Organization Department of the CPC Central Committee, said that Chen, who started at the grassroots level, gained experience through his work in various posts.
"He is familiar with the work of the Party as well as the economy, and is good at handling the overall situation," he said.
"The decision by the central authorities was out of consideration for the actual work needs, a spirit of cadre exchange, and the real leadership situation in Tibet," he said.
Chen noted that Tibet holds political significance and is an important strategic position.
"The Party and the central government have high requirements for the development of Tibet, and local cadres of all ethnic groups have great expectations," he said.
Chen Quanguo was born in 1955 in central China's Henan Province and later obtained a masters degree in economics.
A retired soldier, he started as a worker in an automobile factory in Zhumadian City of Henan.
After serving as a government leader at both the county and city levels, he was promoted to vice governor of Henan Province in 1998. In 2003, he became the province's vice Party chief.
He was relocated to neighboring Hebei Province in 2009, where he served as vice Party chief of the Province, and governor from 2010.
In regards to Chen's predecessor, Zhang Qingli, Zhang Jinan said that the government "fully recognized" his work in Tibet.
He said that Zhang Qingli will move into another position, but did not elaborate.
Editor: Yang Lina
Posted by Claude Arpi at 7:40 AM