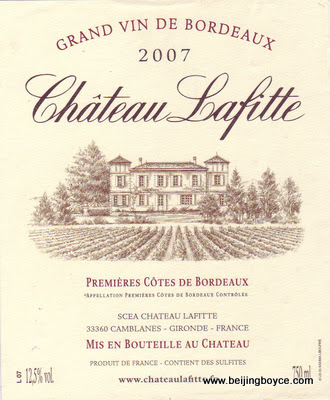 According to this article between 80 to 90 percent of Château Lafite wine sold in China is fake.
In less than ten years, the price of Château Lafitte has risen 857%!!!
A few months back, as I visited some of the Châteaux in the Médoc where Château Lafite is located, I noticed several mini-buses loaded with Chinese visitors/tourists.
I wondered, 'what are they doing here?'.
I was later told that they are the Châteaux' best customers since 'Europeans are broke'.
I then realized that the newly-found love of the Chinese people for Bordeaux 'grand crus' was serious business.
The Chinese are well-known for their prowess in retro-engineering, but it is probably easier to duplicate a Russian fighter plane than a "Première Côte de Bordeaux".
In this case, only the labels can be copied easily. But, this serves the purpose of the 'nouveaux riches'.

PCWorld reported a few weeks ago that Chinese authorities have found 22 more fake Apple Stores just in the city of Kunming (Yunnan). A month earlier, five fake stores had been discovered in the capital of the Yunnan province, two of which had been ordered to close.
The Rothschild family, the owner of famous vintage since the 19th century can find a consolation, no Chateau Lafitte stores will be open soon in China, though the fake red wine will probably continue to abundantly flow for the 'nouveaux riches' of the Middle Kingdom.

The Brand Name Château Lafite Rothschild at Chinese Officials' Dinner Table
Source: news.163.com, August 15, 2011
Lafite is a trademark not registered in Mainland China. Château Lafite Rothschild, a wine estate in France, produces 15,000 to 25,000 cases of wine annually, or about 200,000 bottles. China's annual quota of Lafite wine imported from France is only 50,000 bottles. However, the annual sale of Lafite in China exceeds 3 million bottles, meaning 80 to 90 percent of Lafite sold in China is fake. In less than 10 years, the price of Lafite has risen 857%.
Over time, Lafite in China has gradually lost its original nature and now serves a social function. It is used to judge someone’s economic situation. To show off their status, people dare not to comment on Lafite. Even if they have bought fake Lafite, they silently accept it, fearing ridicule for not being able to recognize true Lafite. Lafite’s high price and the reputation of the wine of kings satisfies the proclivity of government officials, who, at a party, must drink the best wine. The rising demand has resulted in a higher price for Lafite, which, in turn, makes Lafite more popular among government officials and elite groups. “Lafite,” a symbol of status, has become the “official wine.” The taste and color are no longer important. A businessman observed, “I cannot take the risk of not providing Lafite at the dinner table.”
http://news.163.com/11/0815/01/7BF99J6O00014JHT.html
Posted by Claude Arpi at 6:43 AM

The Chinese mix wine with Sprite and drink it bottom-up like beer. It serves them right to drink only fake wine. Don't let them insult the good wine of the world!