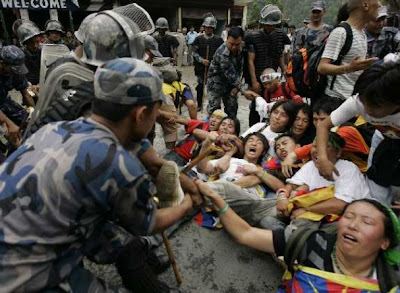 This Report from TibetInfoNet points to a serious issue for the Tibetan Diaspora and more particularly for the new Prime Minister of the Tibetan Administration in Dharamsala: the large scale illegal immigration of Tibetans in direction of European countries and the US.
In the case mentioned by TibetInfoNet, the 'refugees' might have been Nepalis, but in several other cases, the illegal migrants are 'genuine' Tibetans.
Last week, IANS reported that


"a 22-year-old woman of Tibetan origin, suspected to be a refugee living in Bangalore, has been arrested after she tried to obtain a fake Nepali passport. Police also arrested three Nepali men from Nuwakot district for helping her obtain the passport fraudulently.

Besides the woman, who had obtained a Nepali passport in the name of Chhintal Tamang, police arrested 66-year-old Bhakta Bahadur Tamang, who had feigned to be her father, K.P. Thapaliya, who had signed the documents as a referee, and Devendra Neupane."


The arrest of a Tibetan refugee seeking to get a fake Nepali passport comes less than a week of two more Tibetan being arrested at Kathmandu's Tribhuvan International Airport while trying to leave the country on fake Nepali passports.Nepal's Central Investigation Bureau arrested 15-year-old Jayang Tenzin, and his sister, Tsering Lhamo, 12, around Tuesday midnight while they were seeking to board a Qatar Airways flight to Turkey with other members of their family who have been living in the US under the status of Tibetan refugees. Also travelling with the youngsters were their parents Jyamba and Chode, both of whom had valid US visas, and a younger brother who is a US citizen by birth.

Passports were fake but were stamped with genuine US visas.
In this particular case, the 'Tibetans' might have been Nepalis with forged 'Tibetan' documents, but in several other cases, Tibetans have used fake passports to leave Nepal.
The question is: do they have a choice today?
Another example is cited by IANS: Zigmey Lhanzom, a Tibetan woman arrived in Chicago in 1997. She told a US court that her parents were resistance fighters who opposed the Chinese invasion of Tibet and subsequently had to flee to India. She grew up in the family of an uncle, who was arrested by the Chinese while she was sent to a labour camp for taking part in anti-China demonstrations. Lhanzom admitted in court that she escaped to Nepal and then obtained a fake Nepali passport to go to the US.
In the meantime, Thinley Lama, the Dalai Lama's representative in Nepal was arrested by Nepal Police from his office, the Tibetan Refugee Welfare Office (TRWC).
His crime?
Earlier in the day, he had organised a press conference: "This press conference has been organised to clarify and give correct and factual information on the news of alleged Tibetan refugees in Nepal that has been reported in the media recently and also to bring forward the problems faced by Tibetan refugees in Nepal,” he said.
It referred to the case mentioned above.
TRWC affirmed that after investigation it was found that the Tibetan Reception Centre in Kathmandu had no records of the two, concluding that "the letters obtained from the siblings were concocted."
The background of the problem is of course the quasi take-over of Nepal by the Chinese authorities and the impossibility for  genuine Tibetan refugees to get valid papers (the confused situation is used by Nepali illegal migrants).
Remember a Wikileaks cable which stated that the Chinese 'reward' the Nepal Police to get rid of the Tibetans.
Unless India takes a stronger position, the situation is not going to improved soon on the 'take-over' front.
We can only hope that the new Kalon Tripa with his legal background will look into the issue and find a temporary solution with the concerned authorities.
It is in the interest of the Tibetans and the image that they want to project of their nation.

Notes:
1: In the US, in particular in New York, there is a strong community of Nepalis from Nepal's Himalayan region. Because of the close cultural connection, most of them live in close proximity to Tibetans. They often participate in religious ceremonies and functions, like celebrations for the birthday of the Dalai Lama, and some of them are even involved in political events; something hardly imaginable in Nepal itself. Some pick up the Tibetan language quickly and become more proficient in it than in their own mother tongue, as many grew up in a Nepali speaking environment.
2: Minors below the age of 16 have another registration document.
3: There are a few cases in which RCs were issued recently but these must be regarded as special cases or the result of bribery.
4: Note that the case of Tibetans who have recently arrived from Tibet is different. Under the 'Gentleman's Agreement', these are normally issued a document by the UNHCR as well as an Indian visa and are obliged to proceed to India.
5: It is unclear why the children's passports were issued in Sindhupalchowk district, situated between the Kathmandu valley and the Tibetan border, instead of in their native district of Mustang. This is possibly due to the children residing temporarily with their guardians in Sindhupalchowk, pending their continuing journey to the US.
Posted by Claude Arpi at 7:01 AM