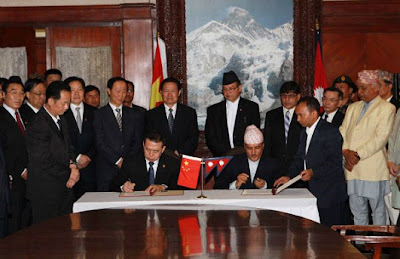 An interesting development, Zhang Qingli, the Party boss in Tibet is accompanying the Politburo Standing Committee member Zhou Yonkang in Nepal.
Zhang is seen on the left of the picture.
Though the Tibet issue may have not been officially discussed, the trans-boundary issues are bound to have come on the table.
Zhang was certainly not here just to enjoy the warmer air of the Kathmandu valley.
According to Phayul.com before the Chinese delegation’s arrival, some Nepali officials called upon the Dalai Lama's Representative (Voluntary Co-ordinator of Tibetan Welfare Office), Thinlay Lama to make sure that there would be no Tibetan protest during the visit.
Later, the Nepal Police arrested five Tibetans in Kathmandu. The Boudha Police Station confirmed that the five are being kept under preventive detention.

Khanal's Exit Clouds Zhou Visit
HIMALAYAN NEWS SERVICE
2011-08-17
KATHMANDU: The resignation of PM Jhala Nath Khanal has poured cold water over Chinese leader Zhou Yongkang’s much awaited visit to Nepal, sources said today. Zhou and his 60-member delegation, including half a dozen ministers and vice-ministers were widely expected to raise Beijing’s long standing concern about Tibetans in Nepal and their support for free-Tibet movement. The issue of reviewing Nepal-China Peace and Friendship Treaty of 1960 was also expected to figure during delegation’s meetings with Nepali leaders, according to official sources.
“PM’s resignation was the reason behind their mind change,” said a senior official.
“They might have thought that it was not the right time to raise serious issues as the government had become a caretaker one,” he added.
Zhou, the ninth ranking member of powerful Politburo Standing Committee and Chief of Politics and Law of Communist Party of China, expressed “awkwardness” of PM’s resignation during his visit in his meetings with Khanal, Maoist Chairman Puspa Kamal Dahal, NC President Sushil Koirala and Former PM Madhav Kumar Nepal. “He said China would like to see stability here,” said PM’s foreign affairs adviser Milan Raj Tuladhar, who was present during the meeting at PM’s office today.
Zhou and his team did not mention a single word regarding Tibetan issue during the hour-long meeting with Khanal, though it was widely projected as the main agenda of the visit. Nevertheless, Khanal reiterated Nepal’s long-standing ‘One China’ policy and commitment to act against anti-China activities. In his meeting with Home Minister Narayan Kaji Shrestha, Zhou, however, implied that Nepal needs to improve its weak security arrangements along Nepal-China border and wished to help Nepal government to this effect.
Zhou’s delegation also called on President Dr Ram Baran Yadav at his office and expressed China’s wish for smooth transition. In the evening, he hosted a dinner at Solti Hotel for senior leaders of political parties and government officials.
Posted by Claude Arpi at 4:31 PM