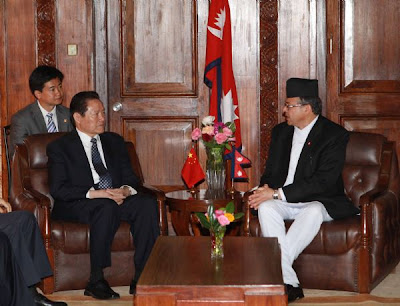 The Economist said that the Nepalese media speculated about the status of the "Asia Pacific Exchange and Co-operation Foundation" wanting to invest billions in Lumbini.
Was this mysterious organization a front for either the Indian or the Chinese intelligence service?
It concluded "The truth seems even stranger".
One could ask: why should an organization, based in Hong-Kong with China's backing, be representing the interests of India.
Strange speculations!
It is however surprising that UNIDO, a UN organization can decide to invest $3 billion in Lumbini (isn't it a big amount of money) without referring the issue to the stakeholders (India is one of them).
Let us not forget that Lumbini is located a few kilometers of the Indian border  and India can't certainly remain silent, if huge infrastructure development is planned at her doorstep.
The Himalayan News Service reported that "The resignation of PM Jhala Nath Khanal has poured cold water over Chinese leader Zhou Yongkang’s much awaited visit to Nepal".
Zhou had planned to raise Beijing's concerns about the activities Tibetans in Nepal (the reviewing Nepal-China Peace and Friendship Treaty of 1960 was also expected to be on the delegation’s agenda).
It did not happen. Apparently, Zhou did not mention "a single word regarding Tibetan issue during the hour-long meeting with Khanal, though it was widely projected as the main agenda of the visit."
According to a senior Nepali official: "the PM’s resignation was the reason behind their mind change," adding: "They might have thought that it was not the right time to raise serious issues as the government had become a caretaker one.”
However in his meetings with Khanal, Maoist Chairman Puspa Kamal Dahal, NC President Sushil Koirala and Former PM Madhav Kumar Nepal, Zhou expressed 'awkwardness' about the PM’s resignation on the eve of his visit. He added that China would like to see stability in Nepal.
In his meeting with Home Minister Narayan Kaji Shrestha, Zhou implied that Nepal needs to improve its weak security arrangements along Nepal-China border and Beijing wished to help Kathmandu in this.

A bizarre project in Nepal
At Buddha’s birthplace
A Chinese development proposal causes disbelief
The Economist
Aug 20th 2011
AFTER Prachanda, the leader of Nepal’s Maoists, stepped down as prime minister in 2009 he several times met representatives of the “Asia Pacific Exchange and Co-operation Foundation”. The Nepalese media speculated that this mysterious organisation was a front for either the Indian or the Chinese intelligence services, the two giant neighbours often accused of meddling in Nepal’s politics. The truth seems even stranger.
In July Chinese media reported that the Hong-Kong-based foundation—which is widely thought to have China’s backing—had signed an agreement with UNIDO, the UN’s industrial-development organisation, to invest $3 billion in Lumbini, a village in southern Nepal. Lumbini is the birthplace of the Buddha, which the project aimed to make a “Mecca for Buddhists”, with train links, an international airport, hotels and a Buddhist university.
The news caused uproar in Nepal. Neither the central government nor the local authorities responsible for Lumbini said they had been consulted about, or even heard of, the project. UNIDO’s officers say they will not comment on the affair while they try to discover how the organisation got involved. If this was an exercise in Chinese “soft power”, it was a disaster.
India is highly sensitive to Chinese activities in Nepal. It regards Nepal as part of the Indian sphere of influence, and it is easily Nepal’s biggest trading partner and source of investment. Nepal pegs its currency to the Indian rupee. Through close cultural and linguistic ties, and the machinations of its diplomats and spies, India has long exercised a strong influence on Nepal’s politics. It is widely believed that India helped topple Prachanda (whose real name is Pushpa Kamal Dahal) as prime minister in 2009 partly because he was thought to be too close to China.
Now the role of Nepal’s other giant neighbour is becoming more visible. Chinese interests were once limited to demanding support for their policies in Tibet. To that can now be added burgeoning commercial interests in hydro-electricity, construction and telecoms. This week China’s top security man, Zhou Yongkang, became the latest in a series of senior Chinese officials to visit Nepal, bearing loans and aid packages. Chinese diplomats have begun discreetly treating Nepalese journalists to whisky-fuelled dinners and offering them visits to China—blandishments that were once the preserve of India. Chinese hotels, restaurants and brothels have multiplied in Kathmandu.
How to interpret it all? Observers agree that security remains China’s top priority in Tibet, though it is undoubtedly looking to expand its economic influence, too. For Nepal, balancing India’s influence by engaging more with China is attractive. One of the poorest countries in Asia, Nepal should benefit greatly from improving economic ties with its booming neighbours. As for Lumbini, the Buddha scheme has been shot down, but attempts to revive it are already under way. If the would-be investors handle it better next time, such a huge project may prove irresistible.
Posted by Claude Arpi at 7:38 AM