A new boss for Tibet 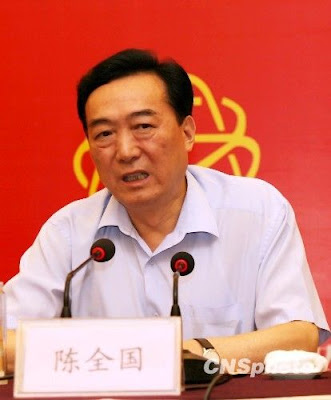 Zhang Qingli, the Party boss in the Tibetan Autonomous Region has been transferred to an unknown position.
Is this move connected with the recent visit of Vice-President Xi Jinping's visit to Tibet?
Difficult to say!
In his first speech as Party Secretary, Chen Quanguo cited five times Hu Jintao and not a word of Xi Jinping.
Does it mean that Chen will follow the hardline policies put in place by Hu Jintao when he was Tibet Party Secretary at the end of the 1980's (till 1992).
Probably.
One worrying sign has been that the hardliner Tibetan cadre Raidi has been seen everywhere in the Tibetan region since Xi Jinping’s visit (the Vice-President visited his house in Lhasa).
He presided at the annual summer pastoral festival in his home prefecture of Nagchu.Poor nomads had to wave Red Flags.
A knowledgeable friend pointed out “when the Chinese media would go into overdrive about the wonderful benefits of this or that policy, it meant that that policy probably existed nowhere in the country and officials not only were bickering among themselves about it but more importantly were having trouble getting the masses to even think about it. I suspect all this national flag business falls roughly into the same category.”
Raidi also participated in other official meetings in Nagchu and Lhasa. 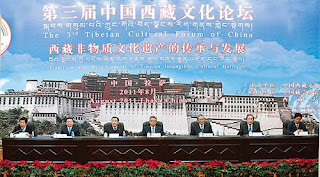 He sat prominently on the stage during Third Meeting of the China Tibet Cultural Preservation and Development Forum next to Zhang Qingli, the then Party Secretary and read the Work Report for the Forum.
All this means that the hardliners are not far. It is difficult to expect radical changes in the months to come.

China replaces Tibet's hard-line party boss
By CHRISTOPHER BODEEN, Associated Press – 14 hours ago
BEIJING (AP) — China on Thursday replaced Tibet's hard-line Communist Party boss under whom bloody rioting broke out in the Himalayan region three years ago.
The official Xinhua News Agency said Zhang Qingli, the region's highest-ranking official, is being moved to another position which it did not identify. It said he will be replaced by Chen Quanguo, a longtime party official in the eastern province of Henan who last served as governor of Hebei province surrounding Beijing.
Like all of Tibet's party chiefs, Chen is not Tibetan but a member of China's majority Han ethnic group.
No reason was given for the move, although Zhang has served five years in the position, roughly the standard term for provincial officials.
China's policies for Tibet are set at the highest levels in Beijing and there is no reason to believe the move heralds any major change.
Zhang, a former top official in Xinjiang, another ethnically troubled region, took over as Tibet party secretary in 2006 during a relatively quiet period.
Two years later, deadly anti-government rioting broke out among Tibetans in the capital, Lhasa, spreading quickly to Tibetan areas of western China in the most severe and sustained unrest in decades.
Security forces poured in and a massive crackdown ensued, with China closing Tibet to foreign tourists for a year. Foreign journalists remain barred from Tibet except on rare, tightly scripted government-organized trips.
During his term, Zhang saved his harshest rhetoric for Tibet's exiled Buddhist leader, the Dalai Lama, calling the 76-year-old cleric a "wolf in monk's robes" and the "scum of Buddhism."
Beijing considers Chinese sovereignty over Tibet unquestionable and inviolable. It says Tibet has been its territory for centuries, although many Tibetans say they were essentially an independent nation until Communist forces invaded in 1950.
The Dalai Lama recently shifted his political responsibilities to the prime minister of the self-proclaimed India-based Tibetan government-in-exile, Lobsang Sangay, a 43-year-old Harvard legal scholar who grew up a refugee.
Copyright © 2011 The Associated Press. All rights reserved.
Posted by Claude Arpi at 6:53 AM