Daring in the Middle Kingdom 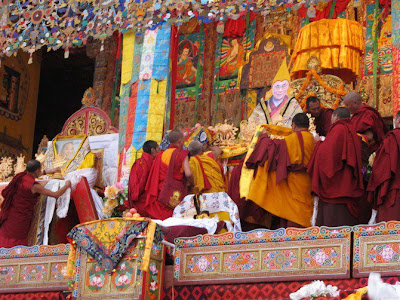 Watching China is fascinating!
Take the train accident which killed at least 40 people (while more than 200 were injured) near Wenzhou, in the southern Zhejiang province. A bullet train collided with another which had stopped after being struck by a lightning. Xinhua said that one coach of the first train “plunged onto the ground vertically while another coach was hanging on the bridge with one side seriously deformed.” Four cars on the second train derailed off the 20 metre-high bridge.
The accident triggered a heated debate in China over the handling of the issue by the government. China Daily wrote that it "generated more complaints than compliments".
It is interesting at several levels.
First, China had planned to build a 13,000-km high-speed railway network by 2012 (and 16,000 km by 2020). There were even plans to increase the speed of the trains to 500 kmph in order to reduce the travel time between major cities. For Beijing, it was a question of pride and also the possibility of lucrative business deals; for example, it was reported that Malaysia was ready to import 228 bullet trains from China.
The incident is also unusual because Beijing had to impose a ban on the coverage of train crash, forcing some newspapers to remove several pages of their edition.
The Publicity Department of the Communist Party issued a censorship order banning all coverage of the crash. The order said: “After the serious rail traffic accident on July 23, overseas and domestic public opinions have become increasingly complicated …all local media, including newspapers, magazines and websites, must rapidly cool down the reports of the incident. You are not allowed to publish any reports or commentaries, except positive news or information released by the authorities."
More unprecedented, several leading Chinese newspapers ignored the ban. The Economic Observer, a respected business weekly, ran an eight-page special issue on the crash with pictures of the wrecked train. The editorial was an open letter to Xiang Weiyi, a two-year-old girl found alive in the train wreckage 21 hours after the accident; both her parents had died: “Yiyi, when you grow up, will we and this country where we live in, be able to honestly tell you about all the love and suffering, anger and doubts around us?”
The Chinese web was agog with the accident.
But what is surprising is that in today’s China more and more people ‘dare’; knowing the possible consequences of their actions or writings, they are ready to take the risk.

Daring in Tibet
Another example of a ‘daring’ action came from the Kham Lithang Gonchen monastery in Eastern Tibet during a week-long religious festival which started on July 15.
Two portraits of the Dalai Lama and the late Panchen Lama were ‘enthroned’ in front of a religious gathering of over 5000 monks and laymen. It was in direct violation of the Government’s orders not to honor the Dalai Lama.
A member of the Tibetan Parliament in Exile in Dharamsala told the website Payul.com received the information that “it was an extremely joyous and emotional moment for the Tibetans who had gathered from all corners of Tibet as they lined up in front of the throne to offer white ceremonial scarves”, adding: “Many people told me that for the first time in their lives they felt as if they really could see His Holiness the Dalai Lama in person and seek his blessings.”
Reports said that monks and nuns from some 100 monasteries of Eastern Tibet had converged to Lithang for the occasion. Member of the restive Kirti Monastery were also invited.
Another case of daring was reported by International Campaign for Tibet: “Urgent appeals have been posted online in Qinghai about lead poisoning in the local water-supply due to mining and smelting operations.”
As nothing was done by the Government, due to corruption, local people appealed on the Net to convey their ‘bitterness’.
On July 23, an anonymous Tibetan blogger wrote: "In recent years the environment at Kumbum Monastery has become awful. The local government and businesses have colluded to build a great many polluting enterprises five kilometers from Kumbum Monastery, and so every time the wind blows or it rains, smoke, dust and foul-smelling air settles down on the roofs and courtyards, and the temples’ golden tiles and wall murals are already corroding."
Diito in Mianyang (Sichuan Province) were the population dared to protest when the manganese pollution in the water had ‘exceeded limits’. The incident was reported by Radio Free Asia.
Netizens were quick to spread the information. A local resident wrote: “The [government] saw from measurements on July 25 that the manganese levels in the Fu River at Mianyang had gone over the limit, yet they didn't report it until 6 pm on July 26. The local population drank contaminated water for one full day." Another blogger stated: "Perhaps it's a bit like the rail crash, where some people resign, and some people apologize?"
The manganese level only decreased after heavy rainstorms. Why? Because the volume of water in upstream reservoirs swelled, diluting the concentration of the chemical: the government had solved the problem!
One understands why the main thrust of the Chinese Vice-President Xi Jinping during a recent visit to Tibet was 'stability'.
In each of his speeches, whether it was in front of the Potala in Lhasa; in Nyingtri, near the Indian border or in Shigatse, the seat of the Panchen Lamas, Xi emphasized 'stability'.
In Nyingtri, he told the people: "People of all ethnicities in Tibet need to understand that stability leads to prosperity and separatist activities lead to disasters."
To the PLA, he said "The social stability in Tibet matters to the country's stability, and Tibet's security matters to national security."
He called on the officers to "improve their preparedness in safeguarding the national unity, security and in maintaining the stability in Tibet".
Xi had probably another region in mind: Xinjiang.
During the visit observers noticed the absence of the Chinese-selected Panchen Lama in the entourage of the future Chinese President.
A few days later, Radio Free Asia reported: “The Chinese government attempted to parade its handpicked Panchen Lama this month in a key Tibetan-majority area [Eastern Tibet] but shelved the controversial move following widespread resentment from the people.”
One understands better the embarrassment that the young Lama, who has never been accepted by the majority of Tibetans, could have been for Xi Jinping, if he had been seen in Lhasa along the Vice-President. One year before his 'elevation' to the supreme post of the People's Republic of China, Xi could not take the risk of an incident.

Unrest in Xinjiang
Further north, in Xinjiang, two attacks left at least 19 people dead, including the five attackers, and injured more than 40 others. Chinese officials immediately denounced ‘terrorist attacks’.
It started when two bombs exploded in Kashgar. An hour after the blasts, two ‘terrorists’ hijacked a truck, killed its driver, and drove into a crowd of pedestrians. The Chinese media said the attackers later got out of the truck and began stabbing by-passers. The local government announced that several bystanders were killed, one attacker died and another was apprehended.
Beijing blamed the attack on 'Pakistan-trained terrorists', but the Chinese leadership can't close its eyes any longer and refuse to acknowledge the deep resentment of the local populations whether it is in Tibet, in Xinjiang or elsewhere in the PRC against the policies of the Central Government.
Unless this resentment goes, 'stability' can't be achieved.

Blogging
Thousands of blogs are telling how upset the public is today in China.
On the popular Sina.com microblogging site, one Shen Xiaobao wrote after the train accident: “I can't tell whether the current society is moving forward or backward. If it's moving forward, why does it have to be paid for in lives?"
A search for the words ‘bullet train’ and ‘crash’ on Sina.com showed more than 700,000 postings just one day after the accident. Even the official Communist Party mouthpiece The People's Daily admitted: “China needs development, but not blood GDP”, adding “There has never been a guarantee that we will not be martyrs to speed."
What is questioned in many posts is the Chinese model of development.
Fei-Ling Wang, a professor of international affairs at the Georgia Institute of Technology told AP: “It will certainly recast the current development model in some more critical light."
Tong Da Huan, a journalist working for the Oriental Morning Post blogged: “China, please slow down your high speed path, wait for your people, wait for your soul, wait for your morality, wait for your conscience. Don’t allow trains to derail, bridges to fall, roads to collapse or houses to cave in. Walk slowly, allow each life to have freedom and respect. And do not leave anyone behind.”
Is the leadership ready to listen to the masses?