Dreadful Cascade on the Yalong River

A couple of days ago, Xinhua reported that a ‘New hydropower station in SW China gets hefty loans'.
This is ominous.
It appears that after a few years recess period, the ‘cascade’ frenzy of large hydropower plants on Tibetan river is on track again.
Xinhua says: “A hydropower station planned for southwest China's Sichuan Province received 53 billion yuan (about 8.5 billion U.S. dollars) in loans from seven domestic financial institutions.”
According to the Chinese news agency: “The planned hydropower station, in the middle reaches of the Yalong River in Sichuan's Garze Tibetan autonomous prefecture, will have an installed generating capacity of 3 million kilowatts with a total reservoir capacity of 10.8 billion cubic meters.”
It is a big, very big dam at a time mega-dams are decommissioned elsewhere in the world.
Chen Yunhua, president of Yalong River Hydropower Development Co. Ltd, the project's developer, explained: “Construction will cost about 66.5 billion yuan and the loan agreement, signed in Chengdu; [it] covers about 80 percent of the total. …The seven lenders are China Construction Bank, Industrial and Commercial Bank of China, Postal Savings Bank of China, Agricultural Bank of China, China Development Bank, Bank of China and Bank of Communications. They will provide long term, low-interest loans to support the project.”
It will be the largest powerplant on the Tibetan plateau; it is expected to start producing electricity by the end of 2021 and it should be completed in 2023 (Chinese companies usually complete their tasks on time, not like in India).
Chen affirmed that the project will “transform the river's hydropower resources into a new driving force for the regional economy and generate clean energy to fuel southwestern and eastern China.”
But it will probably destroy the Yalong river forever.
Though the name of the dam is not mentioned in the Xinhua release, it is clear that it refers to the Lianghekou Dam ("mouth of two rivers"), a concrete-face rock-fill dam on the Yalong River.
The Yalong originates in Qinghai Province, passes through Sichuan, and
joins the Jinsha (Yangtze) River.

The Lianghekou Dam is located at the confluence of the Yalong, Xianshui and Qingda Rivers. With its 295 m height, it will be the highest embankment dam in China and the power station should produce 3,000 MW.
Studies for the dam were completed between 2005 and 2009 with preliminary construction beginning soon after. However the ‘official’ construction only started in October 2014.
According to Chen, 21 cascade projects are planned on the Yalong river; their ‘technical developable capacity’ is 30,000 MW, (representing 24% of the capacity of Sichuan or 5% of China).
It will rank 3rd among China’s 13 ‘hydropower bases’. 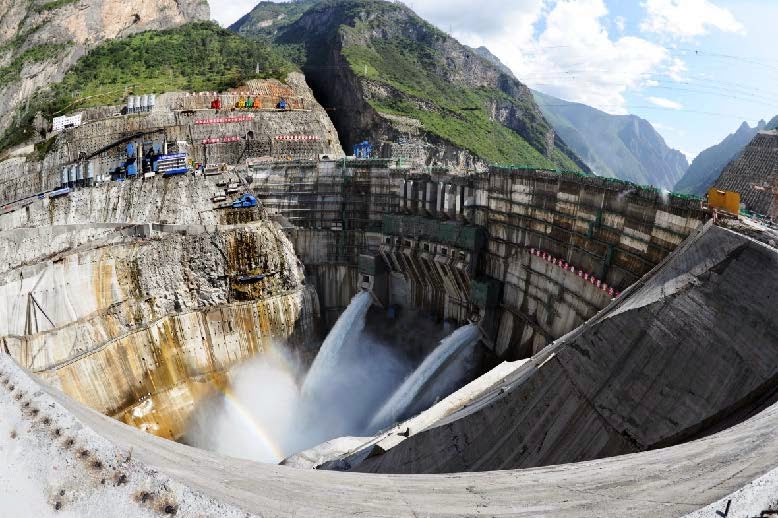 Chen made the following points:
•    Hydropower development of the Yalong River is already in an expedited stage.
•    Key technical issues have been basically resolved.
•    An optimized pattern for joint operation of multiple stations is gradually taking shape.
•    Design and control of high earth-core rockfill dams will become the focus of further research.
Does it mean that the researches have not been completed?
The local populations have of course not been consulted ('Only' 4,900 people will be forcefully displaced).
Today, the Editorial of The South China Morning Post is consecrated to China's new environment chief, Chen Jining.
The Hong Kong daily says: “It is easy to assume that if no one - be it a high or low official - is beyond the reach of mainland graft-busters, then serial polluters should not present too much of a problem to environmental authorities. Sadly, nothing could be further from the truth. The latter may have the law on their side and, supposedly, the clout of a fully fledged ministry in recent years. But the mainland is almost as well-known for potentially calamitous degradation of its environment as for the breakneck pace of economic growth responsible for it. This is because serious air, water and soil pollution has accrued over decades, economic growth still gets higher priority and responsibility for protecting the environment is divided among various government departments.”
Don’t you think that the ‘cascade of dams’ is also a ‘serial killer’?