The Dalai Lama arrives in India

Last week, Chinese Vice Foreign Minister Liu Zhenmin called the Indian Ambassador to China to lodge 'a stern representation’ after Prime Minister Narendra Modi's visited ‘a disputed border region’.
Xinhua reported that Mr. Liu expressed "strong dissatisfaction and staunch opposition" to the Indian side's insistence on arranging the visit by its leader to the disputed area on China-India border.
The Chinese news agency said: “Modi visited a disputed area in the eastern part of China-India border to attend activities marking the anniversary of the so-called Arunachal Pradesh."
Foreign Ministry spokeswoman Hua Chunying added: “The Chinese government has never recognized the so-called Arunachal Pradesh."
The main problem is that the Government of India does not firmly answer these baseless statements.
Why can’t Delhi start taking up with Beijing the issue of Chinese officials visiting the Aksai Chin?
A question remains, does Beijing have any legitimacy in its claims over Arunachal?
In this connection, I have a question to the leadership in Beijing.

A historical question to Beijing
If Arunachal has always been ‘Chinese territory’ as Beijing pretends today, why did the PLA’s troops stationed in Lhoka and Kongpo areas of ‘Southern Tibet’ not follow the Dalai Lama when he crossed the Indian border in Khenzimane/Chuthangmu, north of Tawang on March 31, 1959.
The Chinese troops should have, if the Tawang and Bomdila districts (then Kameng Frontier Division of the NEFA) belonged to China!
They did not! Why?
Simply because, at that time China did not consider NEFA (today Arunachal) as part of its territory.
This claim is an after-thought following the incidents in Ladakh (and Longju in Subansiri Frontier Division) in August/September 1959.
Here are an extract from the Dalai Lama’s autobiography Freedom in Exile.
The Tibetan leader crossed the Indian border at Khenzimane/Chuthangmu where he was received by a detachment of the Assam Rifles, the Political Officer in Bomdila (Har Mander Singh) and his APO in Tawang (T.S. Murty). The Assam Rifles had then a post at Chuthangmu, near the Nyangjang chu (river).

Here are an extract from the Dalai Lama’s autobiography ‘Freedom in Exile’:

From Lhuntse Dzong we passed to the small village of Jhora and from there to the Karpo pass, the last before the border. Just as we were nearing the highest point of the track we received a bad shock. Out of nowhere, an aeroplane appeared and flew directly overhead. It passed quickly - too quickly for anyone to be able to see what markings it had - but not so fast that the people on board could have missed spotting us. This was not a good sign. If it was Chinese, as it probably was, there was a good chance that they now knew where we were. With this information they could return to attack us from the air, against which we had no protection. Whatever the identity of the aircraft, it was a forceful reminder that I was not safe anywhere in Tibet. Any misgivings I had about going into exile vanished with this realisation: India was our only hope.
A little later, the men I had sent on from Lhuntse Dzong returned with the news that the Indian Government had signalled its willingness to receive me. I was very relieved to hear this, as I had not wanted to set foot in India without permission.
I spent my last night in Tibet at a tiny village called Mangmang.
o sooner had we reached this final outpost of the Land of Snows than it began to rain. This was on top of a week of appalling weather, which threw blizzards and snow glare at us by turns as we straggled along. We were all exhausted and it was the last thing that we needed, but it continued torrentially throughout the night.
To make matters worse, my tent leaked and no matter where I dragged my bedding I could not escape the water which ran in rivulets down the inside. The result was that the fever I had been fighting off for the past few days developed overnight into a case of full-blown dysentery.
The following morning, I was too ill to continue, so we remained where we were. My companions moved me to a small house nearby, but it provided little more protection than my tent. Moreover, I was oppressed by the stench of cows that rose from the ground floor to where I lay above. That day, I heard on the small portable radio we had with us a report on All-India Radio saying that I was en route to India, but that I had fallen off my horse and was badly injured. This cheered me up rather, as it was one misfortune that I had managed to avoid, though I knew my friends would be concerned.
Next day, I decided to move on. I now had the difficult task of saying goodbye to the soldiers and freedom fighters who had escorted me all the way from Lhasa, and who were now about to turn and face the Chinese. There was one official too who decided to remain. He said that he did not think that he could be of much use in India, therefore it would be better to stay and fight. I really admired his determination and courage.
After bidding these people a tearful farewell, I was helped on to the broad back of a dzomo, for I was still too ill to ride a horse.
And it was on this humble form of transport that I left my native land.

WE MUST HAVE BEEN a pitiful sight to the handful of Indian guards that met us at the border - eighty travellers, physically exhausted and mentally wretched from our ordeal. I was delighted, however, that an official I knew from my visit two years earlier was there to rendezvous with us. He explained that his orders were to escort me to Bomdila, a large town that lay a further week's travel away, for rest.
We finally reached it some three weeks after leaving Lhasa, though it seemed like an aeon. On arrival, I was greeted by my old liaison officer and interpreter, Mr Menon [father of former NSA Shivashankar Menon] and Sonam Topgyal Kazi respectively, one of whom handed me a telegram from the Prime Minister:
My colleagues and I welcome you and send greetings on your safe arrival in India. We shall be happy to afford the necessary facilities to you, your family and entourage to reside in India. The people of India, who hold you in great veneration, will no doubt accord their traditional respect to your personage. Kind regards to you. Nehru.'
I remained in Bomdila, where I was looked after very well by the family of the local District Commissioner, for about ten days.
At the end of which, I was fully recovered from my dysentery. Then, early on 18 April 1959, I was taken by jeep to a road camp called Foothills, where a small guard of honour was formed up on either side of a makeshift carpet of canvas leading to the camp overseer's house, my base for the morning. Inside, I was given a breakfast that included fresh bananas - of which I ate too many, with unfortunate consequences to my digestive system - and briefed by Mr. Menon about the arrangements that had been made by the Indian Government on my behalf.

Some pictures showing the Dalai Lama being received near the border, in Tawang and Bomdila. 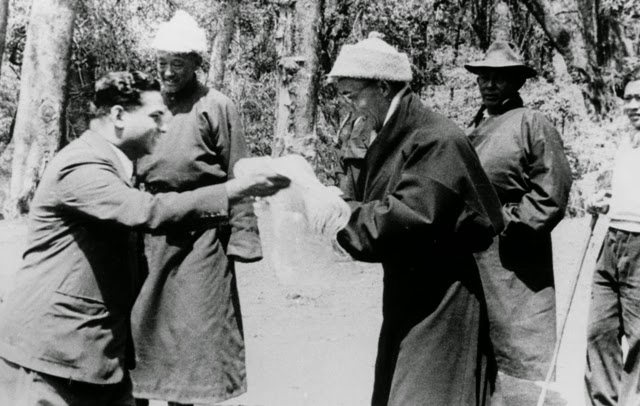