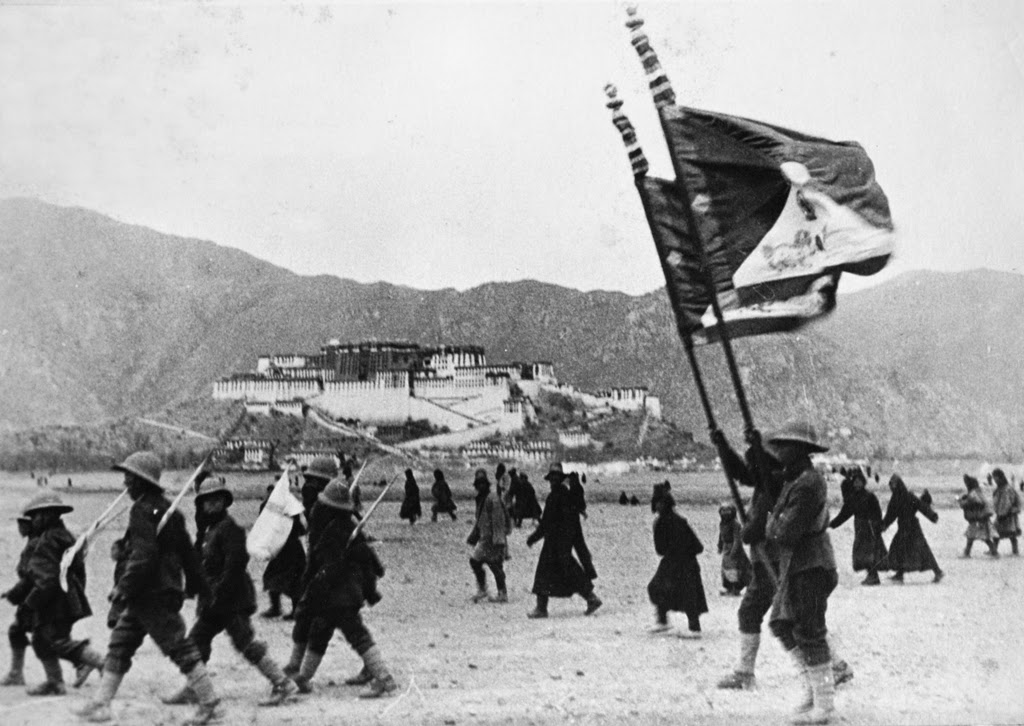 In the summer of 1949, the Indian Chief of Army Staff sent a young bright officer to survey the eventual routes that could be used to bring troops and ammunition in the event of a ‘political’ decision to defend Tibet.
He had also to report on the strength of the Tibetan Army.
As one can see from his report, it was not very promising in case of Chinese attack.
However, the fact that this covert mission took place, and this with the knowledge of K.P.S. Menon, the Foreign Secretary, is proof that in the summer of 1949, the Government of India was still keeping all its options open.
In the 1990s, I interviewed the Indian officer (Lt. Gen. Z.C. 'Zoru' Bakshi, who later became one of the most decorated Generals of the Indian army). He then remembered:

He made his recommendations, nothing was impossible, after all Younghusband had done it 45 years earlier, under much more compelling conditions, but it had to be a ‘political’ choice.
A few months later, the American Chargé d’Affaires in Delhi was told by Sanjeevi, a senior Indian intelligence official that at an "interdepartmental meeting held to discuss Tibet it was decided [that the] most GOI could do was send moderate supply [of] small arms plus a few officers to instruct Tibetans how to use them. India was not ready to become involved in any military adventures in Tibet.”
It was in conformity with the logic of Nehru’s philosophy of non-violence.
Tibet was sacrificed in the process.
Here is the report on the Tibetan Army by (then) Maj. Zoru Bakshi:

1. Strength, composition and location
The Tibetan army is about 8,000 strong. There are approximately 10 Battalions in it. Names of some of these Battalions are:

There is no fixed strength of any of these battalions. Normally battalions are now approximately 900 strong. Neither is there any fixed scale of weapons and equipment for these battalions. They are armed with rifles, brens and sten guns. It is believed that they have also got a few 2 in. mortars.
The Tibetan army has got 12 to 15 2.75 guns which are believed to be locked up in LHASA. Some men and officers have been trained to fire these guns by I.A. [Indian Army] instructors. Most of the troops are stationed at CHAMDO, the most important place in Eastern Tibet. At present there are 5,000 troops there.
Next to CHAMDO in importance is NAGCHUKA in Northern Tibet. There are only one hundred troops there. In addition there are 800 militia men who are armed with old [one line of the report is missing] … men are in LHASA. 500 men of TRAPCHI Regiment in YATUNG.

2. Method of recruitment
Method of recruitment is feudal. Each landlord provides a certain number of men for the army. These men are always from the poorest classes. As no pay is given to the soldier, not even the poorest men show any inclination to join the army. However those who do not have enough money to please their landlord, are forced to join. This has a direct bearing on the efficiency of the soldier.

3. State of training and discipline
I have had a few opportunities of seeing the men of KUSUNG and TRAPCHI Regiments on parade in LHASA. The standard of drill, with and without arms, is very poor. I have no hesitation in saying that an I.A. [Indian Army] recruit, after two weeks training, is much smarter than the soldiers of the Tibetan Body Guard Regiment.
The Tibetan soldier shows no pride in being a soldier. The standard of turn out and discipline is shocking. The soldier does not seem to wash himself and his clothes. A great freedom of choice is given especially to senior officers, in the selection of their uniforms. As the soldier is not given any pay, he has to resort to objectionable methods to earn enough money to support himself and his family. He has no hesitation in looting the civilians in the villages through which he happens to pass. Rape is common and obviously allowed by the officers. There are no training units or schools. The new soldier is expected to pick up professional knowledge from the older men in his Regiment. N.C.O.s [Non-Commissioned Officers] who have been trained by I.A. instructors at Gyantse have proved quite useful in training other men of their Regiment. But their knowledge now seems to be quite rusty as no refresher courses have been run for these men. The I.A. instructors found these men quite keen and enthusiastic students. Due to the shortage of ammunition and a desire of the Tibetan Government to build up an ammunition reserve, the soldier was seldom given an opportunity to fire his weapons in the past. The little ammunition which was received from India was locked up in the ammunition dump in LHASA. Recently fire practices were held in LHASA and were considered quite useful by the army officers.

4. Leadership
The Magchies (Cs-in-C) and Depons (Battalion Commanders) are mere figure heads who are usually despised by their men. Any civil official may be picked up and made Magchi or Depon. These officers after being trained to salute with their swords are considered quite fit for their respective commands. The real leaders are the Rupons (Majors who have rise from the ranks) and the N.C.Os. These are the persons who train and lead their men in action. Although junior in rank, they command respect of their men.

5. Pay and rations
The following are the yearly rates of pay:

[The equivalence in Indian rupees corresponds to the rate in 1949]

Free rations are provided to the soldier by the Government. Uniform is provided by the landlord who enlists the man.

6. Medical organizations
Apart from a few civilian vaccinators who are sent round with vaccine in the event of a break out of smallpox in the army, there is no medical organization. Neither are there any civil hospitals. The Indian Government runs hospitals at Lhasa, Gyantse and Yatung.
The most common disease in the army as well as the civil population is V.D. [venereal disease]. Majority of the patients who come for treatment to our hospitals suffers from this deadly disease. The common habit of the soldiers to rape any woman he can get hold of, the easy ways of the Tibetan women and the prevalence of polyandry in the country, contribute largely to the widespread V.D.. Even nuns and monks from the monasteries have come to these hospitals for treatment of V.D.. Other common diseases are bad teeth, goiter and colds. The soldier is strong and very tough.

7. Morale
Because of the meager pay, complete absence of amenities and a lack of interest of officers in his welfare, it is not surprising that the moral of the Tibetan soldier is low. Another factor which I am sure contributes to this, is lack of confidence in his weapons which is due to inadequate training.

8. Inter-Communication
There is no scientific system of intercommunication used in the army. Some Helios and flags are used to transmit only a set number of messages. No other messages can be transmitted by this means. The international signal code is not used by the Tibetan army. Intercommunication is by means of runners who may be mounted if the distance is long and horses are available in the nearby villages.
The Tibetan Government has got wireless stations at CHAMDO and NAGCHUKA linked to LHASA. The sets used are American which were given as a gift by the American Government. Mr. Fox, an ex-wireless operator of the Indian Mission in LHASA, is the wireless export of the Tibetan Government. He is now training 12 Tibetan boys to operate these sets. So far he has found these boys dull and slow. It is doubtful whether they will ever learn this trade. There is a telegram line up to LHASA. Upto GYANTSE, it is worked by Indian P&T [Post & Telecommunications] Deptt. From GYANTSE to LHASA, the Tibet Government work it.

9. CHAMDO Wireless station
This wireless station which was opened recently is in a good working condition. Speech is possible between LHASA and CHAMDO. Mr. [Robert] Ford an ex-R.A.F. wireless operator is in charge of this station.

10. Landing grounds
There are no landing grounds anywhere in Tibet. Suitable sites are available at TOONA [Tuna, north of the Chumbi Valley and the Sikkim border], GYANTSE and LHASA. Also strong wind storm blow over TOONA daily in the afternoons. The ground is fairly level at all the three places and I think landing grounds can be made with very little work.

11. Foreign officers and arms
Not a single foreign officer is employed in the Tibetan Army. Except for a few weapons given by CHIANG-KAI SHEK, all other weapons have been obtained from India.

12. Communists
There are absolutely no communists in Tibet.

13.Militia
The Militia merely consists of men who are earmarked by landlords for the army in case of emergency. No training is given to these men. Neither are they issued with any uniforms or weapons. The exact number of men in the Militia is not known.
The Tibetan Government is now considering to raise a special Militia of 2500 men from well-to-do families in LHASA.
Young monks can also be called up in emergency. 1/3rd of the total male population are monks. These monks are believed to be due to the fact that they have no worldly attachments. The monks of SERA monastery have fought well against the Chinese in the past.
Posted by Claude Arpi at 7:35 AM