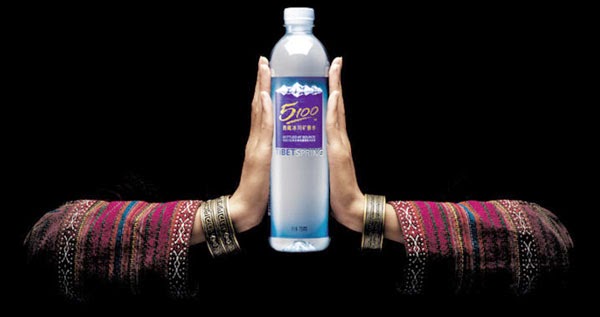 A couple of days ago, China Tibet News reported that the Tibet Autonomous Region (TAR) will soon “launch a natural drinking water project on account of its large repository of freshwater.”
The information was given by Gangqen [Gangchen?], head of the TAR Work Forum on Science and Technology. Gangchen commented that the project will be carried after “carefully with consideration of ecological protection …and provide new impetus to the region’s steady economic growth.”
What does it mean?
Tibet is going to bottle its waters and export it to the Mainland.
Of course, there is no doubt that the plateau's waters are purer than Beijing's or Shanghai's.
The Chinese website explains: “Unlike the rest of the country, which is struggling with water shortages and deteriorating water environment, Tibet boasts a pristine environment and has a large repository of freshwater.”
The local government plans to exploit 28 mineral water springs. Tibet, with its 190 million tons of water reserves, could benefit from the ‘export’, say the Chinese authorities. 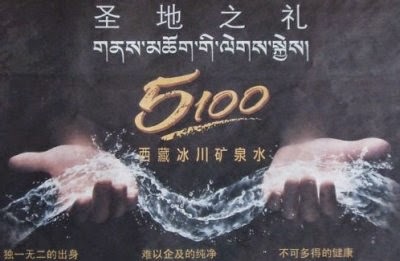 Already in January, Xinhua had announced that the TAR had identified its fresh water resources “as a new sustainable economic growth pillar, which has the potential to support efforts to reduce poverty and boost industrial development in the region.”
Lobsang Gyaltsen, the chairman of the TAR government stated during the Regional People’s Congress that Tibet has produced 300,000 tons of bottled water in 2014: “the sector was an important driver of economic growth,” he added.
Moreover, Gyaltsen suggested that “to fully exploit its potential, Tibet needed brand-driven strategies.”
According to Beijing’s statistics, the TAR’s growth was 12 % in 2014; and as the Chinese Government was keen to “strike a balance between economic development and environmental protection,” water bottling is the solution!
The local government in Lhasa has now decided to promote mineral water on a grand scale: “mineral water industry has been singled out as a suitable sector to boost the local economy”, said Gyaltsen.

Qiu Chuan, the deputy director of Tibet's industry and information technology bureau, told the media that the strong demand for high-quality mineral water “had upped investors' confidence in Tibet's mineral water industry”.
The TAR has today 30 mineral water production lines with a combined production capacity of 2 million tonnes a year, said Qui.
Mainland ‘water producers’ such as Nongfu Spring and Bright Food Group, already signed 16 agreements with the TAR government for mineral water exploitation; the companies promised to invest 3.6 billion yuan (5.79 million U.S. $) in the new bottling venture.
It is going to be big: the TAR government has made plans for a 40 billion yuan (6.5 billion US $) ‘water’ industry for 2019.
I wonder if any environment assessment for setting these huge bottling factories was done?
Probably not!
And this is while waiting to divert the Yarlung Tsangpo (Siang/Brahmaputra) … and the Indus.
Posted by Claude Arpi at 6:58 AM