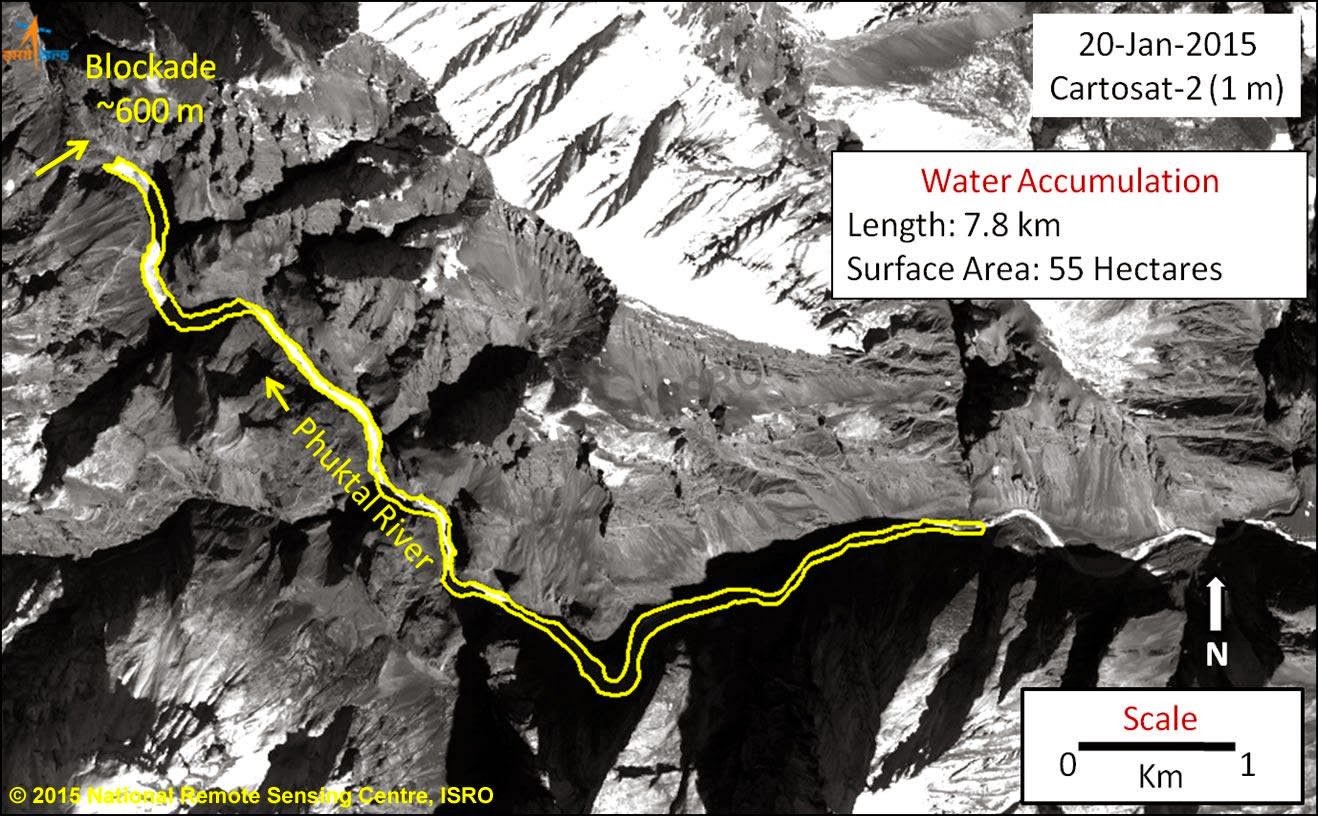 As many Himalayans celebrate their New Year (Wood-Sheep), the time has come to ponder on the future of the mighty mountain range.
A few weeks ago, The Energy and Resources Institute (TERI) hosted in New Delhi its annual event, it was the 15th edition of the 'Delhi Sustainable Development Summit' (DSDS). A TERI press release says:

Apart from the grandiose declarations, nothing much seems to have been concretely decided, though climate is changing fast, very fast and the Himalaya will be the first to take the brunt of the future unfortunate changes.
Every day, unseen-earlier events occur.
Take the blockage of the Phutkal river in Zanskar Valley in Kargil District of Jammu & Kashmir.
For the past 2 month, the Phuktal river, one of the tributaries of the Zanskar River has been blocked by a massive 200 ft high landslide ‒ equal to height of a 20-storey building. The landslide has created a lake, about 8 km long; its size is said to be increasing by the day.
The media reported: “The landslide dam is made of mostly fine-grained debris. While the lake is frozen right now, the threat of it breaching the dam is highly possible as soon as the melting season starts. The landslide dam was created on December 31, when a whole side of mountain soil landed on the Phuktal river. The landslide lake has been accumulating water.”
The situation is so serious that the National Crisis Management Committee (NCMC) met on Feb 20, 2015 (under the chairmanship of the Union Cabinet Secretary Ajit Seth) to take stock of the situation; it approved an Action Plan which will be implemented within the next 15 days; it has to be completed by end of March (as the snowmelt may cause the landslide dam to threaten the villages downstream in April).
According to the Action Plan, the following steps will be taken:
Let us hope for the best. It is however necessary to ponder at the earliest about the future of the Himalaya and its populations.

Another example: Bhutan, the Land of Happiness
How long the Kingdom of the Dragon will remain happy?
Probably not for long, in view of the developments taking place in Bhutan.
On the occasion of the Bhutanese (and Himalayan) New Year, Yeshey Dorji, a Bhutanese photographer and blogger (Bhutan Land Of The Thunder Dragon) spoke about ‘his wish’ for the Wood-Sheep Year. He wrote:

I WISH that the two governments of Bhutan and India would get together and take the only sensible decision they can - a decision to abandon the Punasangchu Hydropower Projects.
In his interview to the Kuensel of 21st September, 2013, Dasho Chhewang Rinzin of Druk Green Power Corporation has said that ‘indecision’ in the case of Punasangchu Hydropower Project I should be avoided. I would like to go one step further and add that ‘correct decision’ is even more important, than a hasty incorrect decision. And, in the face of what is increasingly becoming obvious that the geographical surprises that are being thrown up in the Punasangchu I & II project areas are insurmountable, the only correct decision, in my view, is to cut our losses and scrap the projects entirely!
Is this a preposterous idea? Not if you consider that given all the ‘geographical surprises’ that are being ‘discovered’ in the project areas, there is every likelihood that the Punasangchu Project I & II may eventually end up in the Bay of Bengal.
What then?
The gravity of the situation cannot escape any one - if one considers that the final cost of the two projects will be 3-4 times bigger than the country’s entire GDP. If these two projects fail, Bhutan can never recover from the ensuing debt!
Apparently, it is not just the Punasangchu I: Kuensel also reported in their April 16, 2014 issue that even Punasangchu II is faced with ‘geographical surprises’! To add to all that, Kuensel on 5th February, 2015 reported that the projects are now running out of budget!
Even if the two governments do not agree to scrap the Punasangchu projects, they should accept that WAPCOS (consultants to all the hydropower projects in Bhutan) has proven to be anything but competent to undertake any further investigations in the case of these or future hydropower projects in Bhutan. Thus, while we must ensure that WAPCOS is barred from future involvement in our hydro power projects based on their terrible record so far, we should now look at engaging consultants from third countries to investigate if the geographical make of the Punasangchu areas is suitable for large hydro power projects. Through the engagement of better-qualified consultants, we should ascertain whether it is wise to continue with the projects - or scrap it, to prevent further losses. If the government of India has the best interest of the projects at heart, they should agree to a second opinion from an independent consultant from a third country.
The Punasangchu Hydro Power Project I started with an initial cost estimate of Nu. 35.00 billion, in 2006. By 2013, the cost had escalated to Nu. 98.00 billion - almost three times the initial estimate [one nu equals one rupee].
The project was supposed to be completed by 2015. Latest date of project completion is now deferred to 2016. Regardless, if past records are anything to go by, we can be sure that the project will not be completed even by the end of 2018. And, in all likelihood, the cost will escalate to over Nu. 120 billion.
In my view the project is no longer economically viable. No one can convince me that a project that has seen cost escalation almost four times its original projection - can still be considered feasible and profitable.
The famous cost + pricing concept is no consolation at all. Have we considered the likelihood that the Indian state electricity boards that purchase our electricity may at some point turn around and tell us that the unit cost of our electricity is too high for them to purchase and redistribute to their consumers? This is most likely to happen - given that our cost of production has gone up so high. What then?
…The Bhutanese people have long been mislead into believing that the hydropower projects will make all of us rich.

Scrapping or not scrapping is a difficult decision to take, but one thing is sure, it is not worth ‘scraping’ happiness for a few megawatts more.
And as the cases of the Phutkal and the Punasangchu rivers show, the mighty Himalaya is an extremely fragile entity.
Next year, before starting their 'high' deliberations, the participants of the 16th edition of the 'Delhi Sustainable Development Summit' should be taken for a trek in the Himalaya and see for themselves the precarious situation in the remote valleys.
Their declarations will perhaps be less pompous and have the value of 'experience'.
Posted by Claude Arpi at 6:57 AM