Will China take the leadership of the Buddhist World?

On October 27, 2014, The Buddhist Channel, a global news platform which provides news on Buddhism, reported the recently-held Conference of the World Fellowship of Buddhists (WFB).
The Channel titled “China lays claims to Leadership of the Buddhist World”.
Is it a correct assessment?
According to Xinhua, China’s official news agency: “Hundreds of the world's Buddhists gathered at an ancient temple in northwest China's Shaanxi Province to open the World Fellowship of Buddhists' 27th general conference. Congregating around a relic said to contain one of the Buddha's finger bones at the Famen Temple in Baoji City, more than 600 representatives from 30 nations and regions were in attendance.”
It is not new that Communist China believes in the Buddha’s relics. Remember in 1957, Zhou Enlai brought some relics to India on the occasion of the 2500th anniversary of Gautam Buddha’s birth.
It was however the first time that the three-day event, organized by the Bangkok-headquartered WFB met on the Chinese soil (from October 16 to 18).
Xinhua says: “Buddhist leaders at the opening ceremony included the 11th Panchen Lama, Bainqen Erdini Qoigyijabu [Gyaltsen Norbu], and Nichiyu Mochida, chief abbot of Japan's Sogen-ji Temple.”
Dr Kalinga Seneviratne, who attended the WFB on behalf of the German Dharmadutta Society delegation from Sri Lanka, commented on the impressive display of Chinese Buddhist culture and hospitality.
There is no doubt that the Chinese are good hosts.
Like many other delegates, Seneviratne praised China: “Though not officially acknowledged, China is today home to between 200-300 million Buddhists thus making it the country with the world’s largest Buddhist population. The restored grand Buddhist temples in Baoji and in close by Xian, and the impressive Buddhist cultural display at the opening ceremony of the WFB meeting is anything to go by, it indicates that Chinese Buddhism has undergone a remarkable revival, after Buddhist temples were destroyed and Buddhist practices disrupted during the Cultural Revolution of the late 1960s.”
Interestingly, according to the Buddhist Association of China (BAC) – the Conference’s co-organizer with the Shaanxi Province – there are only 240,000 Buddhist monks and nuns in China, living in some 28,000 monasteries (over 3,000 in Tibet alone) – and 38 Buddhist Academies.
These 240,000 practitioners are officially registered followers of the Buddha Dharma. What about the non-registered monks and nuns?
For example, it is said that Larung Gar monastery in Eastern Tibet hosts more than 30,000 monks and nuns, while the official ‘government quota’ is 10,000 only. We shall come back on these discrepancies.
Lou Qinjian, the Governor of Shaanxi Province opened the conference by stating: “Buddhism has become an important part of Chinese civilization for over 1800 years [sic] and Shaanxi has been the gateway for the flow of Buddhism from India to China. …Over this period Buddhism has spread the ideas of equality, benevolence and harmony that have become important parts of Chinese civilization.”
Lou affirmed that the Chinese government has been renovating many historic Buddhist monuments in recent years and has also been encouraging the development of Buddhist cultural practices.
It is not what the Tibetans say.
Radio Free Asia (RFA) recently reported that the Chinese authorities have expelled more than 100 Tibetan nuns from a convent in a southwestern Tibetan county near the border with Nepal, sending them back to their family homes and forcing them to wear lay dress.
The same source affirmed that the Party has “tightened restrictions on monastic life in a restive county in Tibet [Driru in Nagchu prefecture], expelling 26 unregistered nuns from a nunnery and study center offering courses in Buddhist philosophy,” adding that “the nuns were not among the 140 allowed to live in Jada nunnery.”
The authorities had only approved 140 nuns to reside at Jada. Only ‘official’ nuns were permitted to continue their studies. 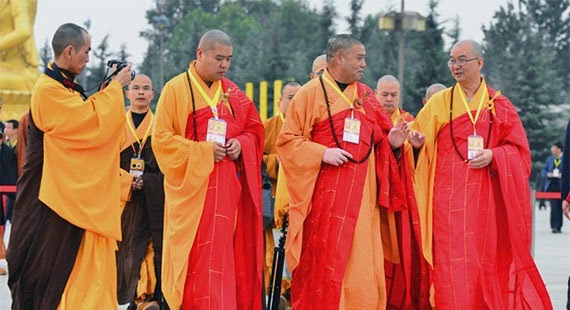