Mondays for flies, Christmas for tigers in the PLA

The South China Morning Post last week asserted that the 'big changes' in China always occurred in Friday or Saturday: "For the past two years it has been accepted – almost as a rule of thumb – among China’s media and interested mainlanders that Fridays and weekends are the likely time for senior officials to fall from grace over allegations of corruption. Yet few observers could tell why – until now."
The Hong Kong newspaper added: "People have described the pattern as 'Mondays for flies, Weekends for tigers' ever since President Xi Jinping launched his anti-graft campaign against both low-level officials and those in the most senior roles."
The 'big change' for the PLA Tigers has happened on the Christmas day.
Want China Times, the news website based in Taiwan has announced the replacement of 40 senior commanders of China's armed forces. The Taiwanese paper reported: "China's president, Xi Jinping, has replaced 40 senior military commanders including the head of the People's Armed Police according to a new nomination list posted by a Chinese internet user."
It added: "Communist Party of China on June, Xi has continued his purge of PLA generals whose loyalty to him may be questionable. The nomination list released on Dec. 20 suggests that various key positions within the Chinese military will be taken over by Xi's close associates."
Apart from Lt. Gens. Qin Weijiang, Hu Yishu and Li Shangfu nominated as the deputy chiefs of the General Staff, General Logistics and General Equipment departments respectively, Lt. Gens. Yin Fanglong and Miao Hua were named as the political commissars of the Second Artillery Corps and Navy, while Lt. Gens.Wang Weiming and Wang Dengping are to be the deputy commanders and deputy political commissars of the PLA Navy. Lt. Gen. Zhang Junxiang and Zhou Yaning will now served as the Second Artillery Corps' new deputy commanders.

Wang Jianping, commander of the People's Armed Police
More interestingly to me is the fate of Lt. Gen. Wang Jianping, who has apparently lost his job to Wang Ning, a deputy chief of general staff of the PLA.
I have often mentioned Wang Jiangping's name on his blog, mainly because he was an old Tibet-hand.
A few words about his career:


Wang Jianping (Han nationality) is a native of Hebei province. He was born in 1953, joined the Army in 1969. In 1997, he was promoted to major general; he became lieutenant general in 2007. He served as deputy commander for one year before becoming Commander of the Chinese People's Armed Police Force (PAPF) in 2009. He is a member of the 18th CCP Central Committee.
He has also been a member of the Central Working Coordination Small Group on Tibet. He served as Commander of the Tibet Autonomous Region's (TAR) PAPF from 1996 to 2000. He knows Tibet well and particularly the Ngari region.

When Wang visited Tibet in June 2014, the TAR's entire Standing Committee was in attendance to receive him.
I then wrote in detail about his visit.
While in Lhasa,he inspected the TAR’s People’s Armed Police training base, a Traffic police detachment, Tibet’s Forest Armed Police Corps, the 117 Police Division, a detachment of Ngari Police.
According to The Tibet Daily, he wanted to get a detailed understanding of the situation. For the purpose, he called on officers and men of the People’s Armed Police.
The Chinese newspapers reported that Wang Jianping acknowledged the success achieved by the Armed Police's Tibet Corps and the Armed Police Forces in every work and asked all the armed police officers and men to understand the serious and complicated situation that they are facing at present. He told the local Party cadres to strengthen the police force for war preparation and continue the good job of building up the police forces.
He said a good chess player takes the initiative.
Well, he was probably too close to Zhou Yongkang, the former member of the Politburo's Standing Committee, who is now 'investigated'.
That was not a good move on the chessboard for Wang.

Will his transfer bring a change in Tibet where the self-immolations continue?
We will have to wait several months to see.
Just before the 'reshuffle' in the PLA, Senior Colonel Yang Yujun, the spokesman of the Ministry of National Defense addressed his regular monthly press conference in Beijing. When asked:


India and China on the military front had a very eventful year this year. There are several interactions at various levels and they have dealt with several issues of differences over the line of actual control. What is the outlook for the next year? Are there any new exchanges in the pipeline? Can you give some details on how you see the next year coming?


This year is the year of friendly exchange between China and India. There are several important cooperation programs between the two militaries. For example, there have been frequent exchanges of high-level military delegations. Both sides held defense consultations and joint counter-terrorism Army training. At the same time, neighboring military commands as well as the border defense troops of the two sides conducted meetings and regular exchanges. Both sides also properly handled issues of encounter at the line of actual control and maintained peace and stability in the China-India border.
Next year, the Chinese and Indian militaries will continue to strengthen dialogue, exchange and cooperation, and push forward bilateral military relationship. In particular, we should focus our attention on the implementation of the Border Defense Cooperation Agreement signed by the two governments and ensure peace and stability along the China-India border.
On the specific exchange programs of the two militaries for the next year, both sides are still in the process of discussion.

To focus on the implementation of the Border Defense Cooperation Agreement' does not mean that there will no Chinese intrusions on Indian soil in 2015, he just signifies: "we will tackle these issues through the Border Agreement."
In the meantime, the 'training' of the different units based on the plateau continues.
According to The PLA Daily: "a battalion successfully conducted a tactical drill at the foot of Mount Tanggula in Tibet on Dec. 20, 2014. It’s a great challenge for soldiers to complete missions in the severe cold of a 5000-meter-high plateau."
Tangulla or Tangkha is located at the border between Qinghai Province and Nagchu Prefecture of the TAR. It is important railway station (the highest in the world?) midway between Xining and Lhasa. 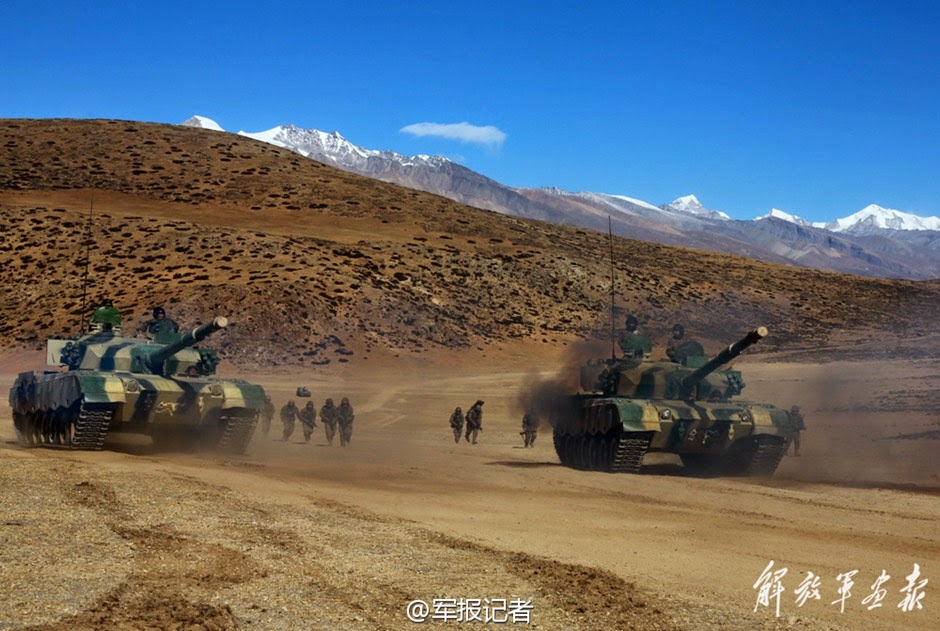 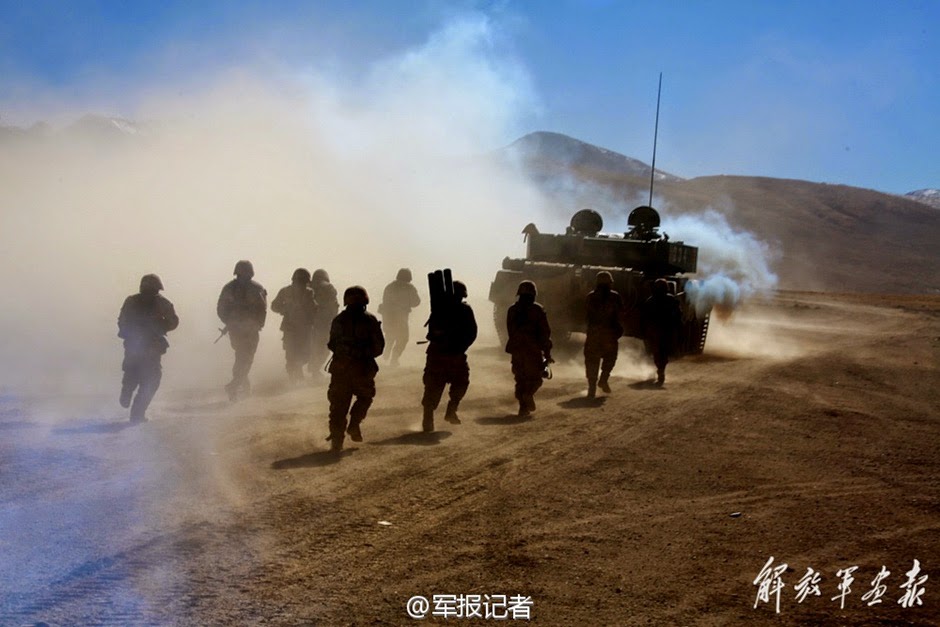 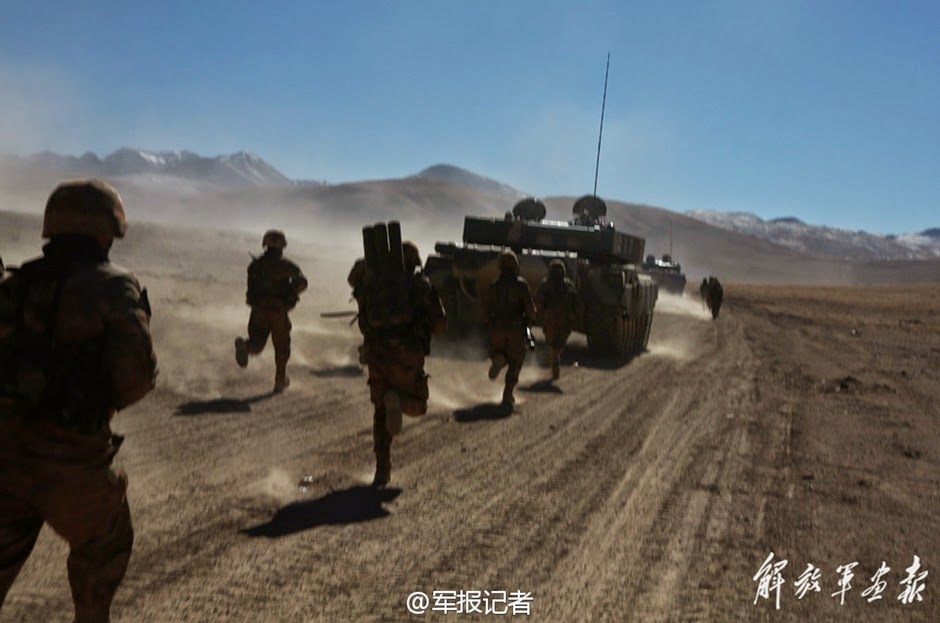 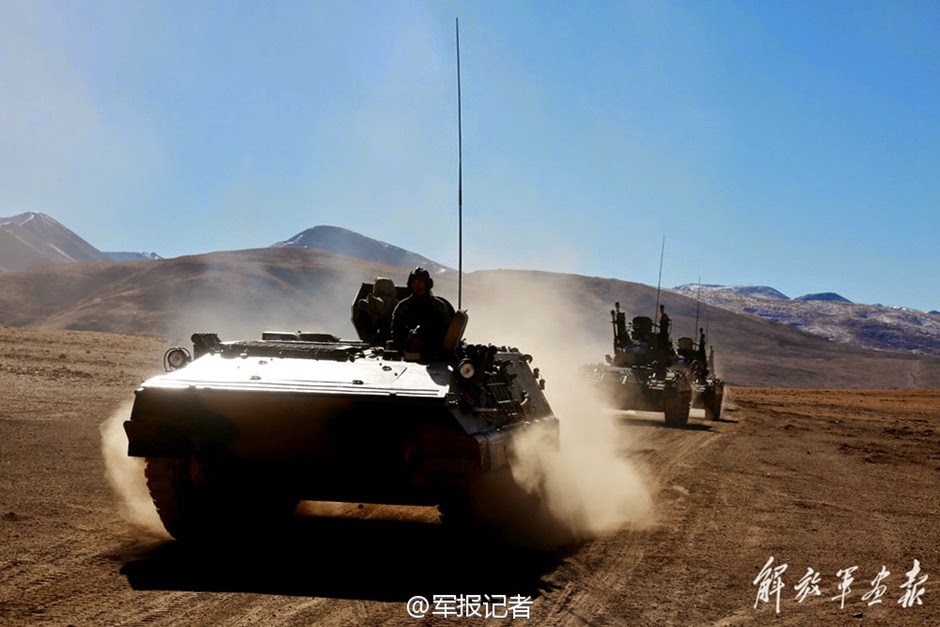 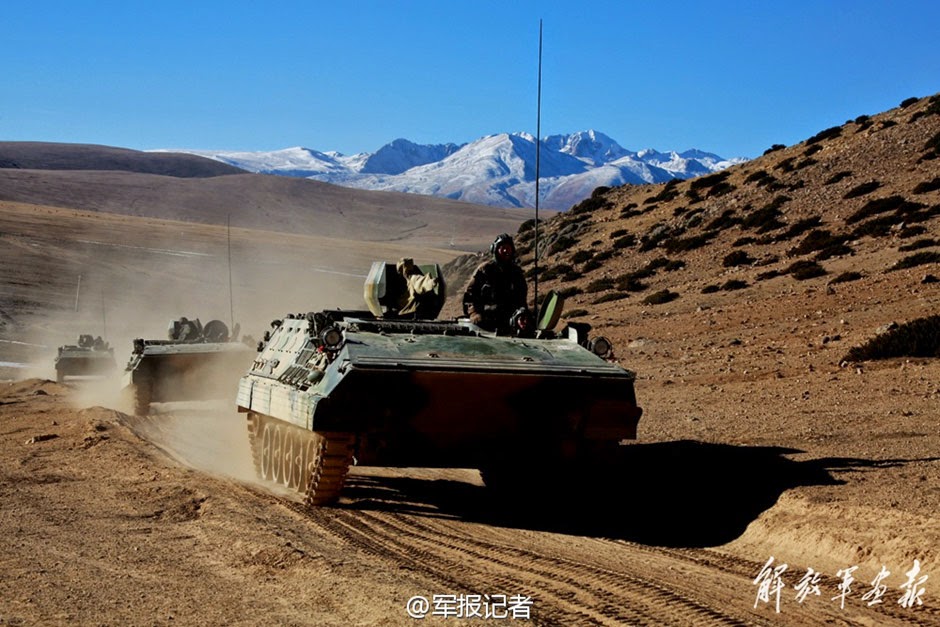 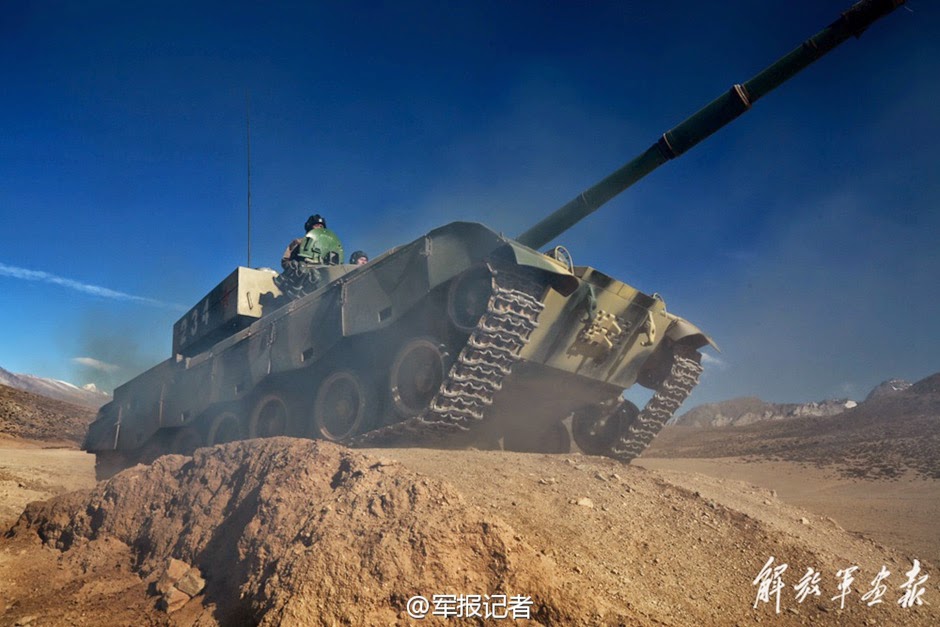 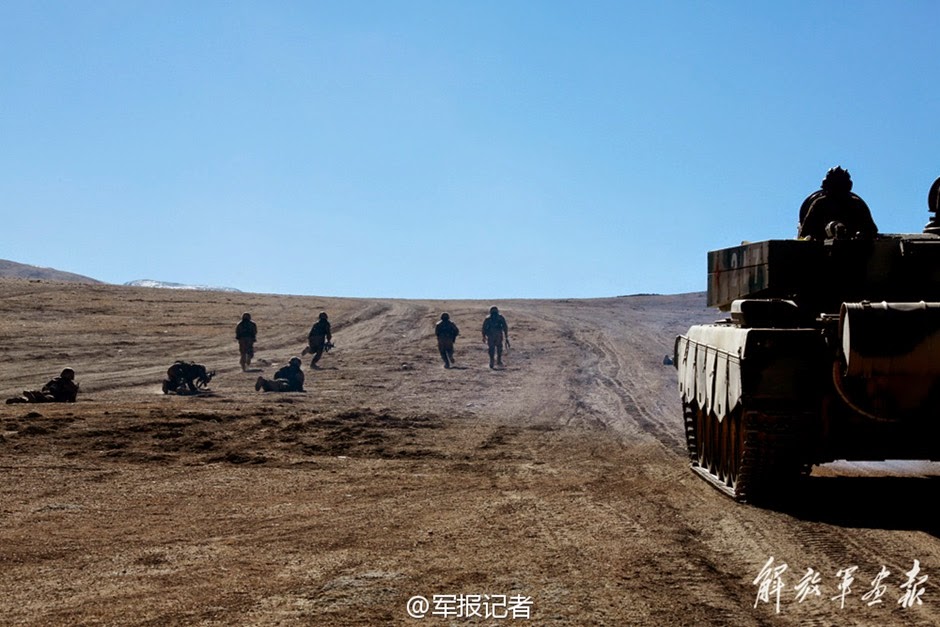 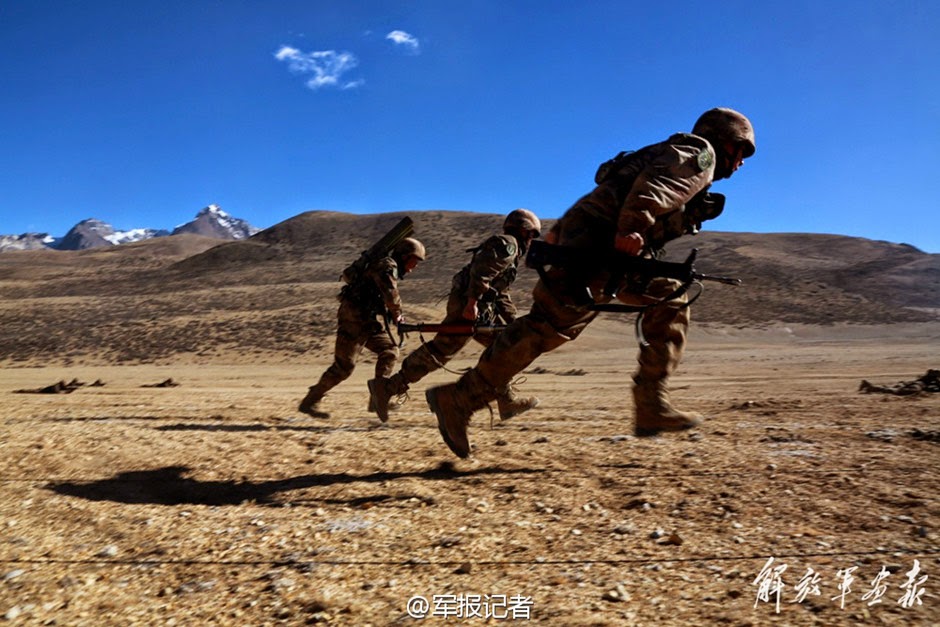 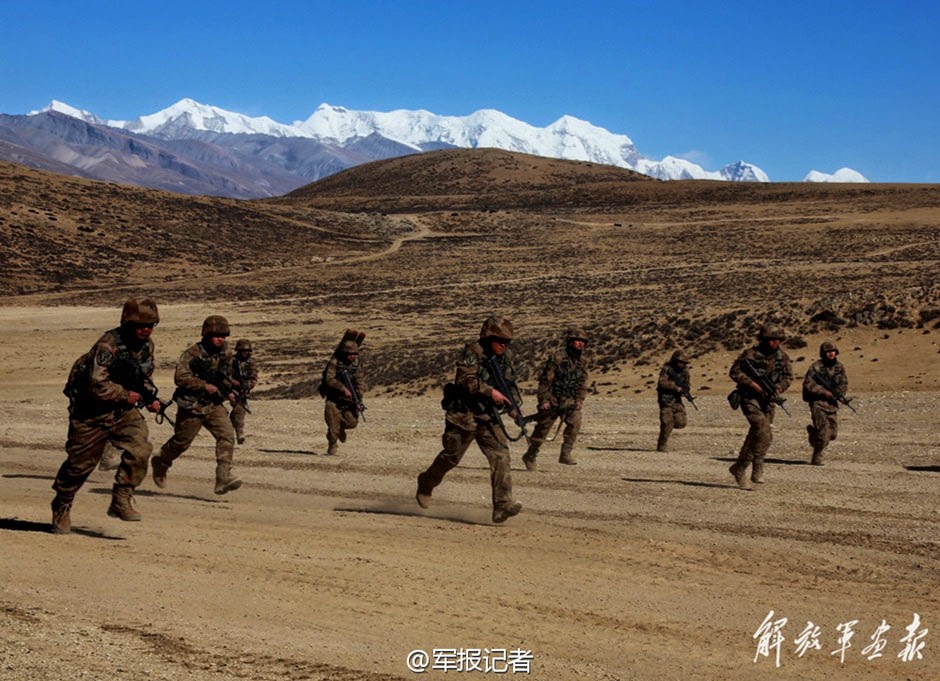