Buddhist China and Tibetan Lamas: win-win equation? Not sure! 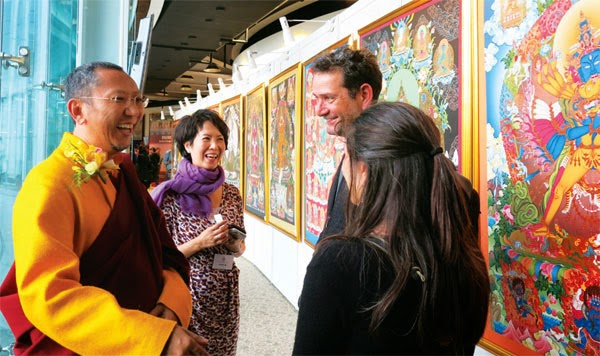 As often mentioned on this blog, China is fast becoming Buddhist …with Chinese characteristics.
The China Daily, which has the widest circulation for English-speaking newspaper in China, yesterday published an article entitled, ‘A monk for all seasons’.
It is consecrated to Shyalpa Tenzin Rinpoche.
The Chinese newspaper describes the lama: “He goes to the gym, makes use of business lingo. ‘It's a win-win-win-win situation’, he says, adding, with childlike exuberance, two more ‘win’s to the regular catch phrase. Shyalpa Tenzin Rinpoche is, evidently, a monk for all seasons,” concludes The China Daily.
All season includes a Chinese season.
And his visit to Hong Kong is a great win for Beijing!
Let us look at the facts.
Right now the Rinpoche is ‘trying to promote Buddhist philosophy through the appreciation of fine art’ in the former British colony.
He displaying some 100 Thangka paintings from Nepal at L'hotel Nina. According to the Chinese newspapers, Shyalpa has invited many ‘friends’ to experience how proximity to these sacred paintings could be ‘transformative’; as the lama adds: “great art brings those who experience it closer to their own sacred selves.”
That’s sounding cool!
The mainland newspaper asserts: “you might catch him running up a narrow, single-track road on his way to the Peak, if you are really lucky. It's probably easier to find him addressing a class in some of the world's finest schools, Harvard, Yale and Wesleyan. He is like a high-profile academic, invited to lecture in universities across continents and probably busier than the CEO of a multinational company. He is the founder of several centers focused on humanitarian activity.”
The question however remains: why is Communist China so interested in this lama?
The Rinpoche is indeed eloquent about Buddhist tenets: "You have to seize the moment spontaneously, without hoping for the consequences, like the bee digs inside a flower without caring that the petals will close at the end of the day, suffocating it to death. Real enjoyment is about accepting who you are, knowing your own abilities and doing what comes naturally."
The catalog of the exhibition, The Art of Thangka: A Himalayan Spiritual Legacy deals “with the intricacies of the thangka tradition and the various schools of Buddhist philosophy using these paintings.”
The Rinpoche affirms that the power of the Thangka is that: "it can arouse a spiritual quality in us. It brings on the realization that we are greater than what we think we are. Thangka can inspire hope in people. It radiates with hope."
What are the win-wins?
For Shyalpa, the exhibition is a great win as a fund-raiser.
He says that the money generated from the sales of these ‘gorgeous’ images will go to the Shyalpa Ladrang Trust Fund to support monks and nuns in Nepal.
The secret of China’s love for the Rinpoche can be found in another article in the same China Daily which gives more personal information on Shyalpa: “[After] he was recognized as a holy child, he trained to become a Buddhist monk since he was four, ultimately receiving guidance from his guru, Chatral Sangye Dorje Rinpoche.”
Shyalpa’s website site also gives details: “His Eminence Shyalpa Tenzin Rinpoche was born in the foothills of the Himalaya Mountains where he was recognized as a holy child and began training as a Lama at the age of four. Rinpoche attended the Buddhist University in Sarnath, Varanasi, and later received transmissions and empowerments from many of the greatest Nyingma and Kargyu masters of our time. Rinpoche is a lineage holder of the Great Perfection (Dzogchen) tradition — his primary root teacher is His Holiness Chatral Rinpoche."
The Communist newspaper says that the mention of his guru’s name brings a twinkle to Shyalpa's eyes: "He is 104 - a strong, vibrant personality, living a full life."
Then comes the reason why Beijing is interested by the Lama: the alumni of Sarnath discreetly sides with China against the protesting students in Hong Kong.
The China Daily writes: “[A] ray of optimism extends to young people who engage in rash and mindless acts, as Hong Kong has seen in recent times,” adding:”It's important to abide by the rules and regulation of the land, respect your culture and civilization.”
In other words, abide with the rules dictated by Beijing, respect the Party, and don’t engage in mindless protests!
It is really a win-win situation; Beijing receives the support of an influential lama and the lama get a lot of good publicity for his exhibition.
To ‘convert’ a few lamas to its cause, seems the best way for China to become a world leader in Buddhist affairs.

There is a postscript to the win-win story; it is about ‘Karmic win’.
A few years ago, the now 104-year old Chatral Rinpoche, who lives as a hermit in Nepal, published a ‘Declaration’; he informed all his disciples:
The old wise man adds: “In the past, I have experienced several occasions that despite of my unwillingness and objection, re-incarnate Lama, yogis, khenpos [abbots] and monks those who have come to see me are taking photographs with me by force under different pretext. Due to electronic supremacy people are coming with different types of electronic equipments so as to record my voice or photograph me which are not easy to detect by a people of my age. Hence, I notify all the Buddhist followers all over the world do not repeat do not believe on the person who is possessing such photographs or making tall claim that he or she is my student in the past or present.”
To follow the old Rinpoche would certainly provide a great karmic win; without mentioning Beijing, however, all his disciples may not be ready to understand this basic truth.
Posted by Claude Arpi at 3:18 PM