Diverting the Indus River to Xinjiang: a 'pilot' project! 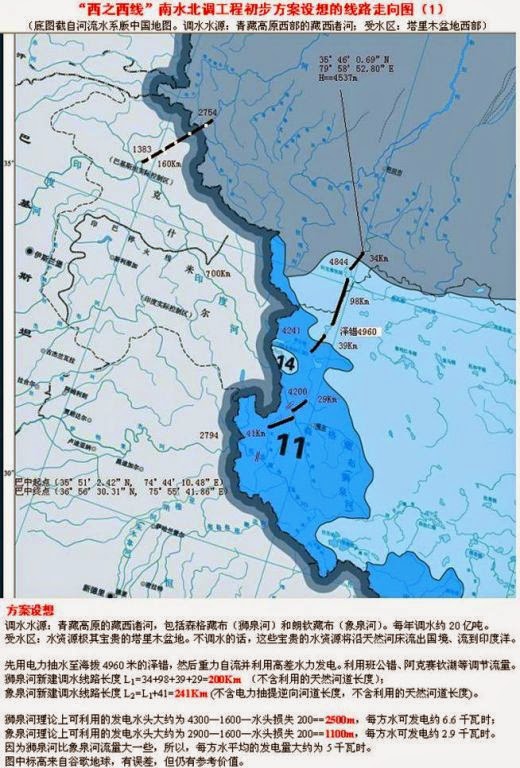 Yesterday, the BBC reported that: “China inaugurated one of the biggest engineering projects of all time: the South-North Water Diversion, a £48bn, 2,400km network of canals and tunnels, designed to divert 44.8bn cubic metres of water annually from China’s humid south to its parched, industrialised north. At 2.32pm, the project’s ‘middle line’ officially began carrying water from the Danjiangkou reservoir in central China’s Hubei province to Beijing – the distance from Corsica to London.”
Chinese officials believe that the diversion can save China from “a water crisis that could set its development back years.”
The Henan Daily explained the 'frugal' launch: “engineering project, in keeping with a frugal and pragmatic working style, celebratory activities will be kept as simple as possible. No officials will take part in the ceremonies.”
Jennifer Turner, director of the China Environment Forum at the Wilson Center in Washington DC, told the BBC that though the project could provide some much-needed relief, it “will never solve north China’s water problem”. It is a “Band-Aid, rather than a long-term solution.”
There is no doubt that the issue will be debated again and again in the months and years to come.
In the meanwhile, some researchers in China have thought of something else, a smaller ‘pilot’ project: to divert the Indus river towards Xinjiang.
It is posted on a Chinese blog, ScienceNet.cn (Chinese: 科学网).
Wikipedia says that:


ScienceNet.cn is a science virtual community and science blog. It is launched by Science Times Media Group (STMG) and supported by the Chinese Academy of Sciences, the Chinese Academy of Engineering, and the National Natural Science Foundation of China with the mission of establishing global Chinese science community. Since its launch on January 18, 2007, a total of 5,553 scientists and graduate students have blogged on ScienceNet. According to the editorial board of ScienceNet, it has been ranking the top one among Chinese science websites."

The blogger quotes some Chinese researchers who argue that the other planned 'diversions' require extremely difficult construction work, large investments, long construction periods, face a lot of engineering problems due to the complexity of the issues (one could add, and 'millions of displaced people'). It makes these projects difficult to undertake, while a small-scale, with low investment and a quickly realizable scheme, could be an ideal pilot project. 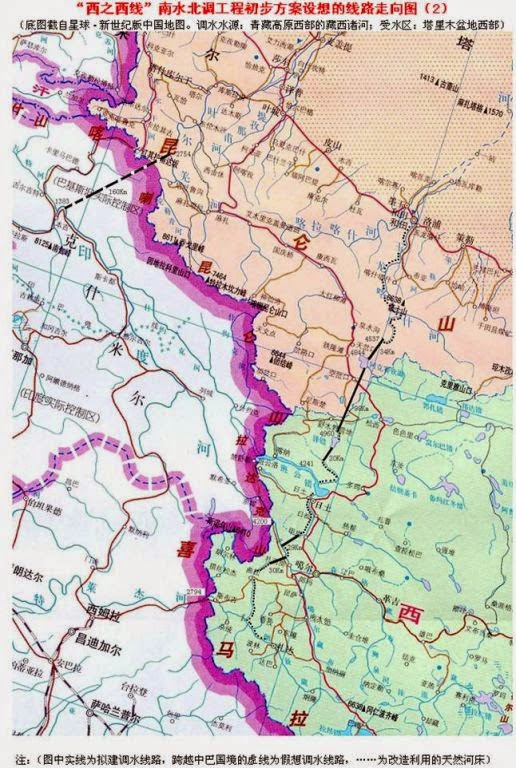 These researchers propose to add a Western segment (a diversion from the Indus river in western Tibet to the Tarim Basin in Xinjiang), to the Western Diversion Route.
This would meet, according to them, the requirements of a pilot scheme.
Their summary is given below (here is a very rough translation):
From the Tibetan Plateau in the West to the Tarim Basin, the water diversion project referred in this article is called ‘the South Western part of Western Route Project’. The full text describes the preliminary survey of the South Western part of the Western Route Project. The size of the diversion program and a brief introduction on China’s northwest after the large-scale water transfer, are given.
The main conclusion is that the diversion will help maintaining long-term stability in Xinjiang.
The paper also suggests deepening the researches and an early implementation of the South Western part of the Western Route Project.
This ‘easy’ pilot project does not, of course, take into account what the neighbours (including China’s all-weather friend, Pakistan) have to say.
That may not make the pilot project so simple after all!
Posted by Claude Arpi at 6:49 AM