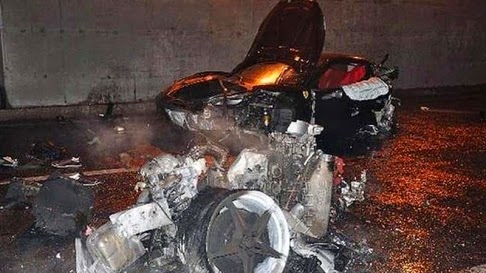 I am reposting an article written in June 2013 about Ling Jihua who has yesterday been put under investigation for 'suspected serious disciplinary violations'.
Now, the media says that the two girls in Ling Gu's car where Tibetan and Uyghur. At the time of the accident, both were Tibetans.
Today, The South China Morning Post comments:


Intriguingly, a few days after the accident, mainland media reports went quiet about the incident. The South China Morning Post broke the story, naming Ling Gu, six months later.
It later also emerged that Ling enlisted the help of the former oil company chief Jiang Jiemin.
Jiang, then chairman of the state-run China National Petroleum Corporation, paid hefty compensation to the families of the two female victims in the crash, a Tibetan and a Uygur, to stop details being made public.
The families of the two young women, both university students, each pocketed tens of millions of yuan, sources said, which was transferred to their banks from China National Petroleum.

More importantly, what is now happening to the United Front Work Department headed by Ling?
The work of assimilating Tibetans and Uyghurs within the Great Chinese family will certainly continue.
Yesterday, Beijing released a document called a 'guideline' (it is a Guideline, not a White Paper), promising "to cultivate and appoint more officials from minority groups and ensure they are given full trust."
If implemented, it will certainly makes a difference. But it could be just propaganda.
According to Xinhua, the document entitled, 'Opinions on Strengthening and Improving Ethnic Work in New Situations' gives special attention "to the cultivation of intellectuals in ethnically-diverse regions, especial those from minority backgrounds."
In other words to the Tibetans and the Uyghurs.
It also promotes understanding among different ethnic groups and the cultural identity of the Chinese nation. This is more ominous. How can someone be a Han (the 'identity' of the Chinese nation) and a Ughyur or a Tibetan at the same time?
The Guideline, issued by the Central Committee of the Communist Party and the State Council, asserts, that it will: "vigorously foster, audaciously select, fully trust and use officials from ethnically-diverse backgrounds, and cultivate experienced Han officials in ethnically-diverse regions."
The document called on ethnic minority officials to master Mandarin Chinese, while urging Han officials to learn the local dialects of the areas where they work.
The real test: will China increase the number of 'minorities' senior officers in the PLA? This is doubtful.
According to the official communique, the 'guideline' stresses "an overall language education in ethnic regions, [it] laid out policies to help bilingual teachers who can teach students Mandarin while respecting the local tongue."
The conclusions of the document are: "China is a country built by all ethnic groups of the nation; Chinese culture is made up of the culture of all 56 ethnic groups; Chinese civilization is created by all ethnic groups; and the Chinese nation is a community of all ethnic groups."
With Han characteristic, one could add.
Hu Yaobang made similar promises in May 1980; nothing happened thereafter. Will this time be different?
Let us keep watching!
In the meantime, Beijing will have now to find a new Director for the United Front Work Department to implement this audacious project.


The 25-year-olds were pulled half-naked from a car smash. The two young women at the centre of the Ferrari crash that killed the son of high-level Communist Party official Ling Jihua have been named.
In its latest issue, Hong Kong-based news magazine Asia Weekly writes that the two young women in the vehicle when Ling Gu died upon impact after crashing his Ferrari were Tashi Dolma (Zhaxi Zhuoma), daughter of a deputy director of the Qinghai Provincial Public Security Department, and Yang Ji, then a student at China University of Political Science and Law in Beijing, reportedly the daughter of a well-known living Buddha also from Qinghai.
According to Asia Weekly, Yang passed away unexpectedly last month despite showing signs of positive recovery from the serious injuries she sustained in the accident. It is claimed she felt unwell and was given an injection last month, after which she fell into a coma and later died.
High-level Communist Party official Ling Jihua lost his son in the accident.
The magazine, citing 'informed Beijing sources', claims both the women are ethnic Tibetans and were each 25 years old at the time of the accident.
The accident happened in the early hours of March 18 when the speeding Ferrari smashed into a wall, rebounded and crushed a railing on the opposite side of the road. One naked body and two half-naked bodies were thrown from the wreckage. A half-naked man Ling Gu died immediately while two young women – one naked and one half-naked – were seriously injured.
Photos of the wreckage circulated online and many Internet users took it as another drink-driving accident involving the "second-generation rich".
Wild stories began to spread that the trio were playing sex games in the car when the accident took place. Different versions of who was driving and who was in the front and back seats became the subject of gossip in Beijing's corridors of power.
The accident would come to affect behind-the-scenes political jockeying in the run-up to next month’s 18th party congress – which will produce China’s new generation of leaders.
Ling Jihua is considered an important member of Hu's camp and was being groomed to become one of the People's Republic's sixth generation of leaders in another 10 years.

This was more than a year ago.
Since then, Ling Jihua, who did not make it in the Politburo, looks after the less-glamorous United Front Work Department and particularly the volatile Tibetan affairs.
For the past two weeks, Tibet has been on the boil and Mr. Ling must bear the brunt. Tibet is haunting him once again.
As reported on this blog, sometimes in May, Yu Zhengsheng chaired his first Central Tibet Work Coordination Small Group in Beijing.
Chen Quanguo, the TAR's Party Secretary was one of the attendees.
On his return to Tibet, Chen immediately went for an inspection tour of the Nagchu Prefecture (from May 21 to 24); the day he was returning to Lhasa (May 24), thousands of Tibetans gathered in Driru county, one of the largest demonstration in years.
For the Party, it is an extremely serious incident; particularly as it came at the time of the visit of the powerful Party Secretary in Nagchu Prefecture.
The situation was so serious that on May 25,  Ling Jihua rushed from Beijing to Lhasa for an 'investigation/research mission'. It appears that Ling stayed nearly a week in Tibet.
There is no doubt that his visit is linked with the incidents in Nachu
During his stay, the United Front Department's boss met most of the senior Party cadres of the Tibetan Autonomous Region, including Chen Quanguo.
Since then, officials in Tibet are repeating that everybody should study and follow the directions given by Comrade Xi Jinping in March when he met the Tibetan delegation on the side of the National People's Congress.
See my posting on the subject.
Will it help?
In the meantime, a strange news appeared in a Hong Kong publication.
A religious group would have invited the Dalai Lama to visit Hong Kong in September.
Philip Li Koi-hop, chairman of the Hong Kong Tibetan and Han-Chinese Friendship Association, said he has visited the Dalai Lama four times in India between 2009 and 2011 and invited the Tibetan leader to come to Hong Kong. Li affirmed that he was confident that the trip will go ahead, and this, despite the tensions between the Tibetan spiritual leader and the mainland's government.
Li declared: "One time I asked him if he wanted to come to Hong Kong. He answered 'Yes', and said a University of Hong Kong professor had invited him earlier. But the Hong Kong government rejected the visit."
Is it a trail balloon sent by Beijing, realizing that their minorities' policies in Tibet have failed. Reading and even putting in practice Xi Jinping's speeches does not seem to help.
It is too early to say, but the fact remains that if Ling had to rush so quickly to Lhasa, it proves that there is a serious problem on the Roof of the World.
Posted by Claude Arpi at 5:00 AM