The more chaotic Tibet gets, the better

The Digital Archives of the Cold War International History Project of the Wilson Center in the United States has added few new fascinating historical documents to their rich collection.
Three of them are related to Tibet.
The first one is a short 'marginal note/directive' from Chairman Mao. It is written onto a 'situation report' [qingkuang jianbao] about Tibet and it is dated February 18, 1959, just 4 weeks before the uprising of the Tibetan people in Lhasa (Match 10, 1959).


The more chaotic [luan] Tibet gets, the better.  We can train troops and toughen the masses. Furthermore, this furnishes sufficient reason for future pacification and reform.
Mao Zedong
18 February

Twelve days after the Dalai Lama left at night the Norbulinka Palace to take refuge in India, Mao put up another marginal note.
It is a comment on a report about the Indian Foreign Ministry's spokesman stating on 29 March 1959 that Tibetans in India had not undertaken 'illegal activities'.


Dear Indian friends: Don’t be credulous with the Tibetans. Their direction of the Tibet uprising is secret. Maybe we know what you don’t know!

(Editor's note) Mao’s tone seems to imply that he suspects the Indians of feigning ignorance. 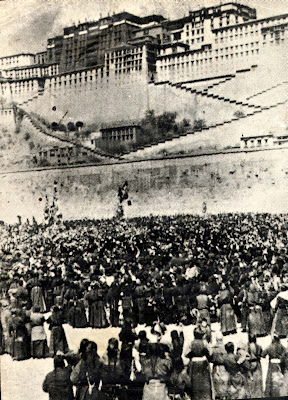 The third document is a report  from Yuri Andropov, who had been posted as Soviet Union's Ambassador in Hungary during the 1956 tragic events.
In 1957, Andropov returned to Moscow from Budapest in order to head the Department for Liaison with Communist and Workers' Parties in Socialist Countries.
Later he became the KGB boss, and from 1982 to 1984, he was General Secretary of the Communist Party of the Soviet Union.
It is interesting to note that 'Chinese friends’ are concerned about Communist China relations with India after the Tibet's events: "Since Indian circles were mixed up in the Tibetan events, it will effect Chinese-Indian relations in some measure."
The Soviet report mentions the reactionary parties such as the Indian Popular-Socialist Party which organized several 'anti-Chinese' meetings and demonstrations. It refers to George Fernandes' Party activities.
The report further points out that many Indian newspapers have begun an anti-Chinese campaign.
The Soviet Union will later condemned China rather mildly.
In a report dated December 18, 1959 for CC CPSU [Central Committee of the Communist Party of Soviet Union] Plenum, Suslov wrote: "During this spring relations between the People's Republic of China and India have seriously deteriorated. This deterioration is linked to the counterrevolutionary rebellion in Tibet in March 1959. Reactionary circles of India to some extent were probably involved in this rebellion. However, the rebellion in Tibet would not have taken place, had one implemented timely democratic reforms and appropriate measures to improve economy and culture with a view on historical specifics of Tibet, and had one been duly vigilant with regard to reactionary elements. Unfortunately, Chinese comrades also did not draw appropriate conclusions from the warnings of the CC CPSU about the activities of reactionaries aimed at the forceful separation of Tibet from the People's Republic of China."
My website has a large collection of historical documents related to the 1959 events.
The discussion between Mao and Khrushchev is also worth reading.

To the Central Committee of the CPSU
'On the situation in Tibet' was prepared on the basis of information provided by the Chinese friends on the latest events [in Lhasa] and [using] other materials available to the [International] Department of the CC CPSU.