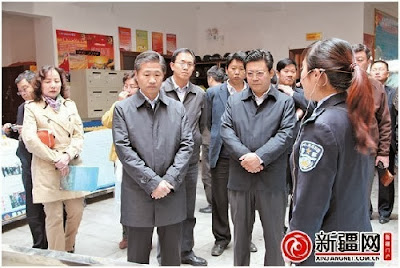 According to The China Daily, a delegation from Xinjiang's capital Urumqi visited Lhasa to learn the tricks about 'security' and 'stability'.
The delegation was taken around by Tibet's Security Czar, Deng Xiaogang who is also the Party's Deputy Secretary of the Tibet Autonomous Region.
You can be sure that the delegation had not come for sight-seeing.
According to The China Daily, the Party cadres from Urumqi were very impressed by the "effective grid management system, which arranges every five or 10 households into a group. They concluded that the Urumqi government should put more effort into improving community facilities and service, enhancing the management of its floating population, and maintaining community stability."
Will an 'effective' grid system be able to stop cars ramming into tourists on the Tiananmen Square? Not sure!
Anyway, the leadership from Xinjiang believes that it can learn from Tibet.
In an earlier post, Tibet: nets in the sky and traps on the ground, I mentioned the Orwellian monitoring system put in place in Lhasa (probably by Deng Xiaogang).
One understands that other provinces are interested.

Urumqi delegation visits Lhasa
November 11, 2013
China Daily
A delegation led by Zhu Hailun, Urumqi Party committee secretary, paid a first-time visit to the city of Lhasa in the Tibet autonomous region from Oct 26 to 27. The delegation discussed economic and livelihood development with local officials.
The delegation – including Zhang Huaguo, Yuan Baoxin, Qiu Shuhua and other directors from the Urumqi government – visited a number of sites, such as the Potala Palace, Lhasa Train Station, Lhasa City Planning Exhibition Hall and Lhasa Lugu community. They were accompanied by Deng Xiaogang, deputy secretary of the Tibet autonomous region Party committee, and Zhang Yanqing, mayor of Lhasa.
The delegation was impressed by Lugu community’s effective grid management system, which arranges every five or 10 households into a group. They concluded that the Urumqi government should put more effort into improving community facilities and service, enhancing the management of its floating population, and maintaining community stability.
Zhu Hailun also shared experiences regarding promoting cultural tourism and building city brands with local officials.
At the Lhasa Train Station, the staff explained the station’s architectural style, management system and eco-friendly technology to the delegation.
Lhasa Train Station, founded in 2006, is a main part of the Qinghai-Tibet Railway project. It lies in Liuwu New Area, 1 kilometer to the south of the main river and 5 kilometers southwest of the Potala Palace.
Lhasa is the administrative capital of Tibet. It is one of the highest cities in the world, located at an altitude of 3,490 meters. The city contains many culturally significant Tibetan Buddhist sites such as the Potala Palace, Jokhang temple and the Norbulingka palaces, many of which are located in Chengguan district.
Posted by Claude Arpi at 6:45 AM