Chinese are good at rewriting history.
The latest example is the new Museum in memory of the great Amdo scholar, Gedun Choepel, which opened last week in Lhasa.
Three months ago, I wrote on the same subject arguing that China was ideologically confused, but, as can be seen from the article reproduced below, it seems today more pure history rewriting than confusion.
Many facets of Gedun's life have been deleted and re-scripted by the Party's historians.
For example, it is said that during the last years of his life, Gedun used to often visit the Jokhang cathedral and stay for long periods in the chapel dedicated to King Songtsen Gompo. He greatly admired the 33th King for having unified the Tibetan nation and pushed back Tibet's borders towards the Middle Kingdom's frontiers. Some of his disciples recalled that Gedun was then 'like in presence of a spirit' (the spirit of the King?).
He also liked to watch the Tibetan Army's drills in Lhasa, though he bitterly complained that the training unnecessarily followed the British style with the orders given in English and the marching style, the uniforms and even the band copying the British pattern.
Gedun however enjoyed watching the Tibetan Army; he knew how important it was for Tibet to remain independent.
Of course, the Communist Party has today forgotten this aspect of the life of the great scholar and artist.
One day, he told a disciple: "We have to fight to retake all the territories which once belonged to Tibet. For example, Tsaidam in the North, the name is Tibetan and means 'saline  swamps'. Also Chone, Gayrong and Muli in Yunnan, all these areas are truly Tibetan territories, he explained, adding that "though for thousand years the Dharma has impregnated the Tibetan Spirit, what can be done now?"
Jokingly, he suggested to transfer the statue of Jowo from Lhasa to a place equidistant from Central Tibet, Kham and Amdo; it would help reunify Tibet, through the power of the Dharma. Then he added, 'we would have to fight to destroy the religion'.
He was probably referring to the excess of power of the Great Monasteries around Lhasa and the close connection between land ownership and these monastic institutions.
The Chinese memory is very selective. Gedun Choepel would have be the first to fight for a free Tibet, free from all superstitions and old beliefs, free from injustices, but also free from the Chinese Communist Party.
One more detail: Gedun did not die on August 15, 1951 as stated in the article below. He witnessed the Chinese troops entering Lhasa on September 9, 1951; he is reported to have shouted: "All is accomplished".  He believed that Tibet had started to pay for its 'karma'.
While watching the PLA from the rooftop of his apartment on the Barkor, he knew that it was the end of a world. He would described himself as ‘a priceless lapis lazuli vase dashed against a stone.' His dreams for a modern democratic Tibet were broken.
The next month Gendun Chopel developed a severe edema, (as a result of cirrhosis of the liver?). He passed away on the eleventh day of the eighth month (October 1951).

Museum in memory of Tibetan scholar open to public
China Tibet Online
November 11,2013
A museum in commemoration of Gedun Chophel, a Tibetan humanism pioneer and scholar, was opened to public in Lhasa, Nov. 11, 2013, according to Chinatibetnews.com.
With a strong Tibetan flavor, the Gedun Chophel Museum is part of the Lhasa old town's protection project, covering an area of 1,269 square meters and consisting of three stories.
The exhibits are divided into four parts, including the Gedun Chophel’s 24 years in Amdo, seven years in Lhasa, 12 years in South Asia and the last few years of his life back in Lhasa.
Gedun Chophel was born on April 20, 1903, in the Zho Phung She Village Tongren County, Huangnan Tibetan Autonomous Prefecture, Qinghai Province. He believed in the Nyingma Sect of Tibetan Buddhism.
In Gedun Chophel’s age, China experienced a turbulent period of domestic strife and foreign aggressions. He pursued truth, upheld humanist spirit, turned his conception of history from Buddhist theology to humanism, and made important contribution to Tibetan modern academic and intellectual history.
While pursuing new thoughts and seeking for social changes, he severely disclosed and satirized various social problems of old Tibet and the British colonist’s plot to invade Tibet.
He participated in the survey and the catalog of the remains of the palm-leaf manuscripts in Tibet, the interpretation of ancient Tibetan literature in Dunhuang, the exploration of Tibetan philology, the English translation of Tibetan ancient books and other groundbreaking academic activities. He also wrote and translated a lot of books, and produced a great number of paintings. All these promoted the later development of Tibetology.
When he returned to Tibet from India in 1945, he prepared to write a book titled The White Annals. However, in April, 1946, the then 'Gaxag' [Kashag] government, incited by the British government, put Gedun Chophel into jail, where he was kept in a gruesome prison and intermittently tortured.
Shortly after his release, he died of physical weakness in the 'Kar ru shal' courtyard of Barkor Street of Lhasa on August 15, 1951, at the age of 48.
Qi Tsala, [Choedrak] member of the standing committee of Tibet and municipal party secretary of Lhasa, visited the Gedun Chophel Museum together with representatives from related departments and local residents.
After the opening ceremony, the Lhasa municipal government held a meeting on management of the Gedun Chophel Museum.
The museum’s renovation has gained vigorous support from the local residents in Lhasa old town, who have got proper relocation; meanwhile, it has also won the support of relative departments such as the Center for Tibetan Studies, said Qi Tsala, who thanked the relative departments and workers for their hard work during the renovation and preparation for the opening ceremony. 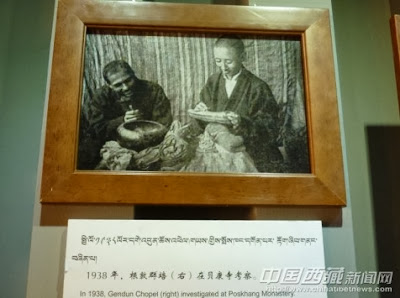 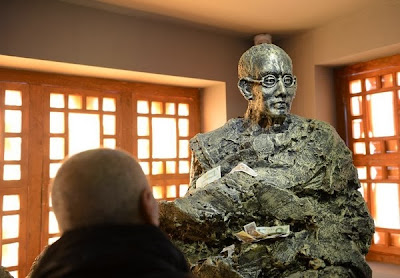 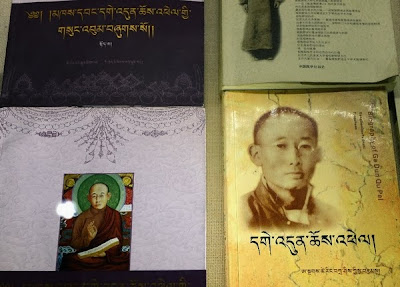