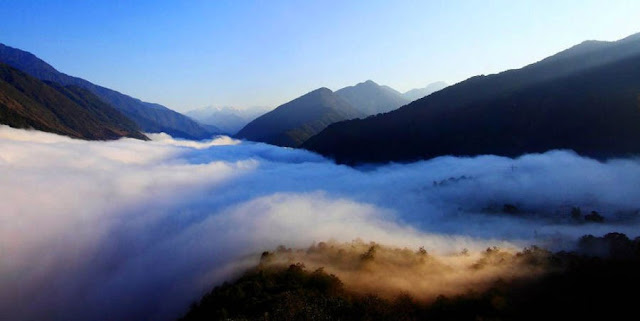 My article The Metok bombshell appeared today in The Statesman.

The  PLA  will  be  the  first  beneficiary. It  is  good  that   Delhi   has   finally  decided to raise a mountain 'strike' corps  with  some  80,000  troops  to  be posted along the Line of Actual Control (LAC) with China. The new formation, the 17 Corps, along with its infrastructure will hopefully be operational in the next seven  years,  but  the  roads  to  the border  have  also  to  be  taken  up  on a war-footing, otherwise the new Corps may not be able to even reach the LAC ~ CLAUDE  ARPI.

The Chinese are masters at timely announcements. When the then Chinese Premier, Wen Jiabao, was landing in Delhi in December 2010, Xinhua dropped a bombshell: “The tunnel of highway linking Tibet’s Metok completed”.
As often, the Indian media did not notice the ‘bomb’; some important cricket matches must have been played around that time! The new tunnel, however, heralded one of the most important strategic changes for the defence of the Indian north-eastern border. The official Chinese news agency had reported: “Construction of the tunnel on a highway that links Tibet’s Metok County to the outside world was completed when explosives blasted through the final section. The construction crew announced the success of the blast, which took 152 kg of explosives, and workers from both ends met.”
Considering that Chinese engineers and contractors are always several times faster than their Indian counterparts to build roads (or dig tunnels), the enormity of the project was obvious; construction workers had taken some two years to complete the construction of the 3,310-meter Galongla tunnel, built at an altitude of 3,750 meters. It was the most difficult section of the highway which was to link Metok County to the mainland (and allow troops to come close to the Indian border in a much shorter time).
In 2010, Xinhua explained that snow and rain made the mountain roads impassable for nine months of the year, and the trek to cross the Galongla pass could take 10 hours or more: “The new road will dramatically shorten the time as the journey through the tunnel will take just half an hour.”
At that time, some 90 km of highway remained to be built. 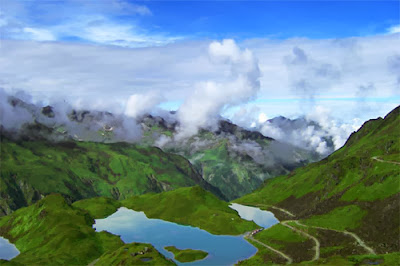 Metok was indeed symbolic. With a population of just 11,000, it was not only China’s last county to have a highway, but the road was a crucial link to the area bordering the Upper Siang district of Arunachal Pradesh. For the Tibetans, it has remained till this day one of the most pristine regions of their country; they consider the area around the Great Bend of the Yarlung Tsangpo river (Siang in Arunachal and Brahmaputra in Assam) as the home of the Goddess Dorjee Pagmo, Tibet’s Protecting Deity. Many believe that this place, locally known as Pemakoe, is the sacred realm often referred to in their scriptures, the last hidden Shangrila.
It is said that the great Indian tantric master, Padmasambhava (known as Guru Rinpoche by the Tibetans), and his consort Yeshe Tsogyal visited the place during the 8th century. The Guru tamed the local spirits and concealed spiritual scriptures or treasures (known as termas) for future generations.
Pemakoe is located at an altitude ranging from 2000 to 3500 m. above sea level, south of Kongpo and Powo (Kham) and north of Arunachal Pradesh (Geling-Tuting area of Upper Siang). It is surrounded by high mountains (dominated by Mt. Namcha Barwa, at an altitude of 7,782 m) and covered by lush vegetation. The rare species of flora and fauna within the canyon is not yet well documented, though the Chinese authorities admit that the region is home for more than 60 per cent of the biological resources on the Tibetan Plateau.
The Pemakoe area and Metok will not be an isolated paradise anymore.
On 31 October, China Tibet Online reported that the 117-km Metok Highway had been opened to traffic. CNTV affirmed that the people in Metok country can now reach the highway linking their remote place to the nearby Bomi county by cars or buses; the journey should take hardly 7-8 hours, if the weather conditions are good. The Chinese correspondent added: “Getting out of Metok (Medog for the Chinese) used to be very dangerous, involving climbing two snow mountains 4,000 meters above sea level.” 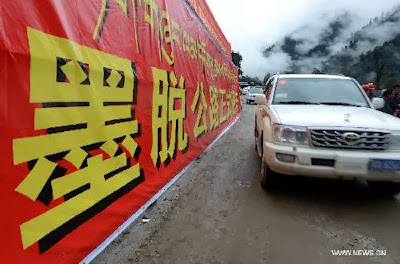 When the Bomi-Medok road joins the National Highway No. 318 near Zhamog township, it has already crossed six rivers.
Xinhua explained: “Great efforts have been made by the government to build a highway to link Metok and Bomi counties since 1960s; more than 200 road-builders sacrificed their lives …In 1965, Lhasa government tried to build a road along Parlung Tsangpo river and Yarlung Tsangpo river to reach Metok. ...Over 700 workers were involved and an unsophisticated suspension bridge was set up. However, the roadbed was left unfinished because of too much difficulties and risks.”
Again, an attempt was made in 1974 and it failed. In 1980, a landslide occurred 106 km away from the starting point; most of the newly-built road was devastated and many trucks and road-building equipment could not be rescued. The project was again abandoned.  It re-started in 1990 and though in February1994, a katcha road had been completed and vehicles managed to enter Metok, they never came back because of  disastrous landslides and mudslides. A monument has even been built to commemorate China’s ‘shortest life’ road. The latest attempt, and the first to be successful, is the fifth one. 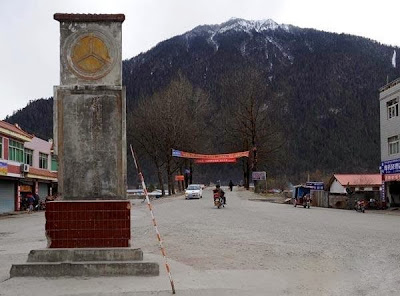 The Chinese media now affirms: “The opening of the highway to Metok is far more than a technological breakthrough …Above all, it is the Chinese dream fulfilled after several failed attempts over the past fifty years. The opening of the highway is bound to boost the socio-economic development of Metok,” and also, one should add, … the People’s Liberation Army’s defence preparedness.
China Tibet Online quotes Agence France-Presse as saying that the new road has  ‘touched a nerve in some of the so-called critics of Beijing’s rule in Tibet’; the latter believe that “infrastructure such as railways and airports enable immigration by the ethnic Han majority, exploitation of Tibet’s resources and consolidation of political control.”
It is an indisputable fact. An article in China Military Online published on 11 September said: “PLA sends materials to Metok, Tibet, by use of motorcades”, adding: “A motorcade regiment under the Sichuan-Tibet Military Service Station Department left for Metok county in the south-eastern part of the Tibet Autonomous Region. It admitted that it was the first time that the PLA had “dispatched motorcades for delivering materials to Metok county.”
It means that nearly two months before the official opening of the road for civilian use, the Chinese army was already bringing supplies for the troops stationed near the Indian border in the Metok area. The PLA’s website acknowledges that earlier Metok had to “rely on horsebacks and occasional helilifts.” 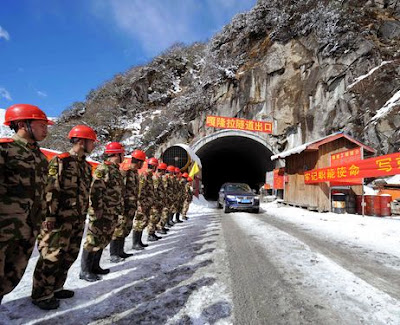 Pang Kuo, the director of the Sichuan-Tibet Military Service Station Department, told the Xinhua reporter: “It used to take the ‘hinny fleet’ more than two months to provide the yearly ration of staple and non-staple food for officers and men posted in Metok. Now it takes only one trip of the motorcade to supply enough materials the troops need for a whole winter”.
Xinhua may poetically say that “without doubt the Metok road is the road of wealth, the road of hope and the road of happiness. Local people will experience unprecedented convenience in their daily life; the culture, tourism and agriculture of Metok are bound to thrive due to this road” and that the highway “embodies the Chinese dream for the benefit of its people and reflects the mutual aspirations of all ethnic groups”. But the fact remains that the PLA will be the first beneficiary.
It is good that Delhi has finally decided to raise a mountain ‘strike’ corps with two independent infantry brigades, two armoured brigades, with some 80,000 troops to be posted along the Line of Actual Control (LAC) with China. The new formation, the 17 Corps, along with its infrastructure will hopefully be operational in the next seven years, but the roads to the border have also to be taken up on a war-footing, otherwise the new Corps may not be able to even reach the LAC.
Posted by Claude Arpi at 4:07 AM