Recently Xinhua reported: ‘Extreme weather reported in Nagri [Ngari], Tibet’.
The Chinese news agency affirmed that according to the Chinese Meteorology Administration, heavy rain storms have been reported since June 15 in the western part of Ngari Prefecture of Tibet Autonomous Region [north of Uttarakhand]: “It is a rare weather condition recorded at this time of year. In Burang [Purang] County, the precipitation hit a new record on June 17, to reach an all-time high,” asserted the agency.
The Purang County, north of Pittoragarh district of Uttarakhand had experienced moderate rainfalls till June 16, when it was struck by a very unusual rain storm with a precipitation of 73.6 mm, the strongest rainfall ever recorded in a single day in June.
The next day, the precipitation for Purang County reached 96 mm, creating a new record of precipitation for June. As the result of this extreme weather condition (due climatic change?), the first batch of Kailash Mansarovar pilgrims reached the Tibetan border with a delay of six days.
On June 20, the fifty one first yatris finally crossed over to Tibet from 17,500 feet high Lipulekh Pass in Pithoragarh district of Uttarakhand.
Ranvir Singh, an ITBP officer declared: “All members of the first batch are hale hearty and they braved the two km track on snow at the Pass to reach the Chinese territory."
Due to bad conditions of the roads and bridges en routes, the following eight batches of the ‘Kailash yatra’ were canceled by the External Affairs Ministry.
But Tibet seems to witness other ‘climatic change’, a political one.
Will it be remembered as the Tibetan Spring or will the Winter soon set again?
In this context, the interview of Prof Jin Wei of the Communist Party School generated a lot of speculations on the Net and in the world media.
So did the announcement that some monasteries would have received the permission to display photos of the Dalai Lama; further it would not be necessary anymore for the monks to criticize or demonize the Tibetan leader. What a big change!
I have also mentioned on this blog, the opening to public sight of the stone pillar on which is recorded the 821 CE Peace Agreement between China and Tibet.
You may think that there is definitively a climatic change for the best on the Roof of the World, but it may not be the case.
Read the recent reports of Human Rights Watch on the 'Grid System', 'Red Armband Patrols' or the relocation of nomads on the plateau.
The touring of Chen Quanguo, the TAR Communist Party boss in different Tibetan prefectures (Lhasa, Shigatse, Nagchu) does not herald a new era of peace and stability. It is still the old way of dealing with Tibet.
Recently, Chen Quanguo went to Shigatse and threatened the monks at Tashilunpo Monastery; he denounced the Dalai Lama, 'a splittist', according to him and told them that under the 10th Panchen Lama the monastery was patriotic. He said that he sincerely hoped that the monks would continue to be 'patriotic' under the 11th Panchen Lama.
Does it mean that some monks are not sincere patriots?
Apparently Chen also visited a number of Public Security posts to see if the lists of neighborhood residents were up to date, separating properly permanent residents, temporary residents and the ‘floating population’.
Chen would have checked if the ‘grid’ system was properly in place.
When he met the People’s Armed Police and the Public Security Bureau officials, he stressed the need to step up efforts to thwart cross-border plots (from India?).
All this is not very cool.
It sounds more like the continuation of the Tibetan Winter. 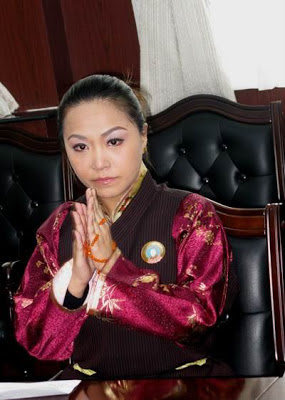