'The Beauty of Tibet': propaganda offensive 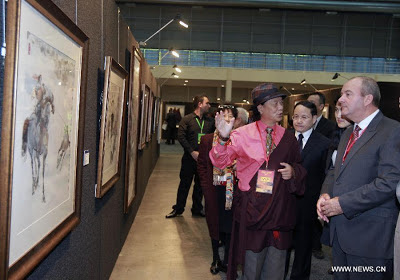 China seems to have brought a new change in its policy regarding the Dalai Lama, who, according to Beijing, gives a negative image of their country when he travels abroad.
The novel way to ‘counter’ the Tibetan leader is to organize a function at the time, (or slightly before) one his visits abroad and promote ‘true’ Tibet.
Australia was the ideal place to test the new scheme.
China Tibet Online, Xinhua’s sister concern and Beijing’s Tibetan voice on the Internet organized an exhibition called ‘Beauty of Tibet’.
The exhibition was first shown at Darling Harbour, Canberra.
The most amazing is that China managed to rope in some Australian politicians, which were used by Beijing for its propaganda. For example, Liberal MP Daryl Maguire, chairman of the NSW (New South Wales) Parliament's Asia-Pacific Friendship Group, opened the exhibition.
Maguire even held a press conference at the State Parliament.
The Chinese website says: “The exhibited images, reflecting Tibetan people's religious freedom and daily life have dramatically enhanced Australian understanding of Tibet and rebutted the shameless lies made by a few Western politicians and the dalai clique.”
The website was running at the same time feature articles on the ‘political’ situation with suggestive titles: ‘Dalai Lama a monumental fraud’ and ‘Manipulating self-immolations cannot change the doomed failure of the dalai clique’, etc…
The website explains: “Appearing to be objective, the reporting of the western media actually has much distorted and misled information that implies political preconceptions. Taking Tibetan religious belief for example, many mainstream western media often add such comments in their reports as that ‘Tibetans' religious freedom is worrying under control of the atheist Chinese Communist Party that believes in materialism.”
Apart from the Beauty of Tibet painting and photography exhibition, the Chinese government brought along Nyima Tsering, who is said to be the painting master of the 10th Panchen Lama (who passed away in 1989).
Tsering asserted during an interview: “The fact that the CCP acknowledges and protects the reincarnation system of Tibetan Buddhism has shown the greatest respect for Tibetan believers and convincing action of abiding by the Constitution.”
Nyima Tsering does not say that according to the Chinese ‘regulations’ only the Party is entitled to recognize ‘reincarnations’. Tsering ranted against the Dalai Lama: "Over the years, the Dalai clique has distorted the real situation of Tibet. In the meanwhile, western media have slandered the development in Tibet and claimed that Tibetans' religious freedom is oppressed. But the fact is quite the opposite.
The painter continues: “For instance, even though the Chinese Communist Party (CCP) is atheistic, it supports the practice of reincarnation, by which I am deeply touched.”
He doesn’t say that the Panchen Lama recognized by the Dalai Lama is under house arrest for the past 17 years. 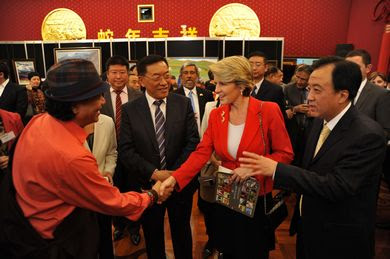 Though Nyima Tsering is said to be traditional painter, the website said that he offers a subtle blend of Chinese charm with western features in his thangka paintings, ‘that show the world a real Tibet’.
In other words, a Tibet with Chinese characteristics!
A discussion on the recent immolations was even held during the ‘Beauty of Tibet’ Exhibition in Melbourne. A Party official, Wang Pijun, president of the China Tibet Online condemned the ‘Dalai Clique’ and he spoke of an eventual return of the Tibetan leader to Tibet (or at least to China)
His views were:
First, it depends on whether the Dalai Lama could bring about stability to the Tibet Autonomous Region and the Tibetan-inhabited areas in some other provinces of China. In his reign as the political and religious leader, the big majority of the Tibetans were ruled as serfs by a small number of people, and at present, the exiled Tibetans are also under the strict control of the ‘Tibetan government in-exile’ headed by the Dalai Lama. From the above, we can infer that his return is out of the question.
The level of argumentation is rather poor, to say the least, what does it mean that the “Dalai Lama is under the Tibetan government in-exile headed by the Dalai Lama”? Obviously, Beijing has not selected the brightest to represent its point of view.
Wang’s second point was as weak as the first.
Second, it depends on whether his return will contribute to the development of Tibet. We know that the Dalai Lama has not done anything good to the development and stability of the Tibet Autonomous Region and the Tibetan-inhabited areas after he fled abroad decades ago. On the contrary, all he has done is to prevent the international community from supporting Tibet's development. Therefore, his return would not bring any benefit equal to the support of the Chinese Communist Party and aids unselfishly given by the people of the whole country to the Tibetan areas.
The fact is that all those who self-immolated asked for the return of their leader before committing the dreadful gesture. The Party official does not explain this. Wang’s third point is also flimsy:
Third, from the perspective of the contemporary Tibetan history, the Chinese government had given the Dalai Lama opportunities to return to his motherland, which were, unfortunately, rejected by himself. Therefore, his intention to come back must be an evil scheme to either hype up the ‘Tibet issue’ or make trouble.
Here Wang Pijun gives an argument which is historically untrue.
For example in 1984, when a Tibetan delegation went to Beijing to discuss a visit of the Dalai Lama, it was the Chinese United Front officials who said that Tibet was not ready because the local government was busy with the preparation of the celebrations of the 20th anniversary of the Tibetan Autonomous Region.
His last reason for not wanting a visit of the Dalai Lama is:
Fourth, the Chinese generally hold that eminent monks are respected for their credibility. However, the 14th Dalai Lama left China in 1959 on his own decision, so his capricious nature makes people believe that he is either incredible or ill-intentioned.
The funniest part of it is that a few Australian politicians were caught by the Chinese propaganda. When Maguire was questioned on why he had opened the exhibition, he fumbled that the NSW Parliament doesn't get involved in foreign policy issues, which were a federal matter, and compared the Tibetan situation to the civil war in Syria.
He pathetically added: “We don't side with one side or another”.
An Australian publication commented: “Yet by officially endorsing the show at its launch, the NSW Parliament has done exactly that. The images have been used by the Chinese government in its propaganda war.”
The federal deputy opposition leader Julie Bishop is said to have ‘inadvertently’ spoken at the Canberra’s exhibition launch.
The controversy is still raging in Australia.
The exhibition later travelled to New Zeeland, again ahead of the Dalai Lama’s visit. Here, China did better, they organized anti-Dalai Lama demonstrations with the help of some local Chinese residents.
Beijing has plenty of money to organize ‘exhibitions of true Tibet’ or send ‘scholars’ everywhere in the world.
More and more these types of programs will become part of China’s soft diplomacy.
But will it work and convince the foreign masses? It is another story.
Posted by Claude Arpi at 6:20 AM